BBC Weather forecaster Darren Bett explained the south-east of Europe will see a temperature spike over the weekend. For central Europe, they will see much of the wet and unsettled weather. For the start of the new week, temperatures will again begin to rise but in the west of Europe.

Spain and Portugal will see a return of dry weather and temperatures in the mid-20s.

Mr Bett said: “We have got some warm weather in the south-east of Europe.

“That heat will be building here in the next few days.

“For many other parts of Europe, it is cooler than it should be for the time of year. 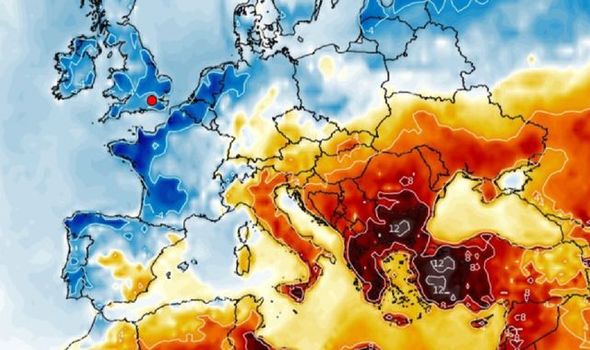 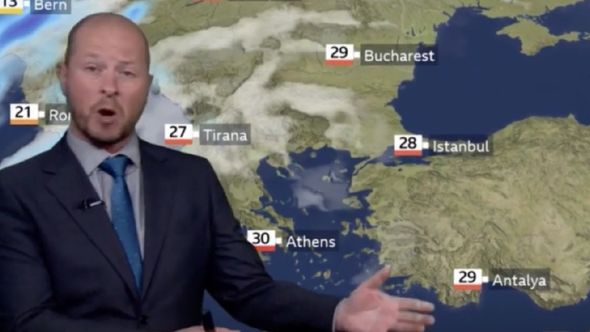 “It will be very unsettled and there will be a lot of cloud on the scene.”

The BBC Weather forecaster went into greater detail about how central Europe will experience wet weather over the weekend.

He said: “The main area of wet weather is on that band of cloud there in central Europe with some outbreaks of rain.

“You can see how it gets much wetter for a while, in Barcelona and moving across central and southern parts of France. 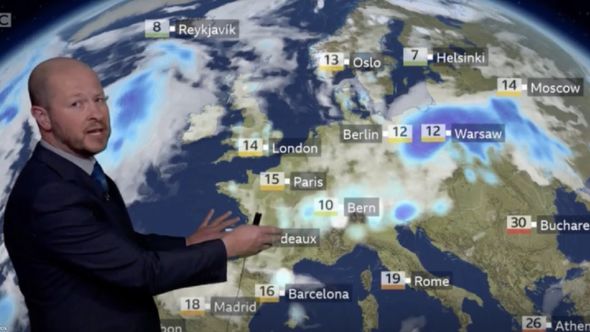 “This rain will also head its way into the Alps as well.”

Mr Bett also discussed the warm spell of weather in the south-east of Europe over the weekend.

He said: “This is where we have got the heat, the eastern side of the Mediterranean into Turkey.

“The sunshine will be here more widely and those temperatures will start to build northwards into parts of the Balkans, Bulgaria and Romania and some higher temperatures in Budapest. 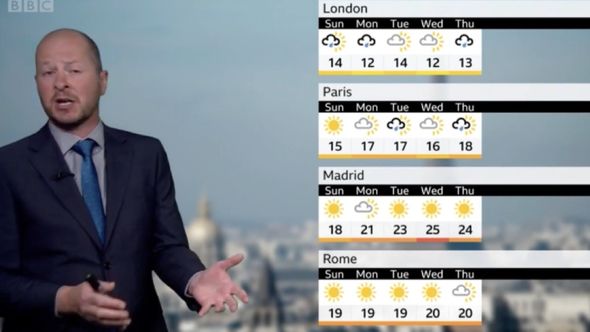 “Other than that this is where we have got the rain and then to the north of that things are much cooler.”

Towards the end of the weekend, the wet weather is expected to move eastwards.

This will give way to warmer and more dry weather on Sunday and into the new week.

Mr Bett said: “The second half of the weekend sees dry weather in France.

“Still some rain and snow in the mountains but most of that wet weather will have moved its way very quickly into Germany and Poland and eventually into Moscow.”

In the new week, for London temperatures will remain in the mid-teens with infrequent showers.

However, in France, Spain and Italy, temperatures will begin to rise to the low and mid-20s.

By the middle of next week, Madrid could see a high of 25 degrees C, the warmest for this part of Europe.

Meghan and Harry’s ‘masterplan’ to be ‘royals of the world’, claims expert