BBC Weather forecaster Carol Kirkwood explained that the UK can expect to hold on to the frosty weather for the next few days. She noted that temperatures will remain in single digits for many across the country and bouts of rain and sleet are to be expected. Going into the weekend she noted that a wall of rain would be moving in across the country from the west.

This wall of rain is set to increase temperatures slightly, however, it will result in downpours for many across the weekend.

The BBC’s forecast for the month warned May will follow April’s lead and begin on a colder note.

The forecast said: “May is starting out on a largely colder than normal note, with unsettled weather expected for the first couple of weeks.

“This weekend it will likely be briefly warm, but colder air will return after only a few days. 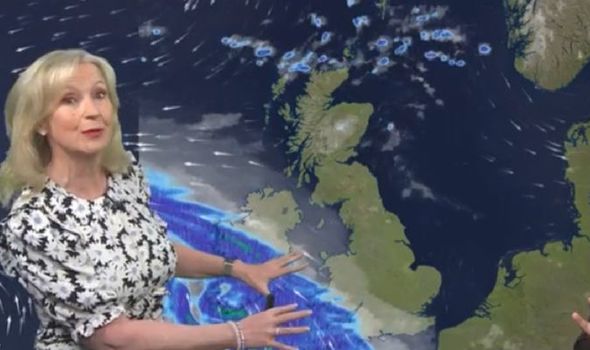 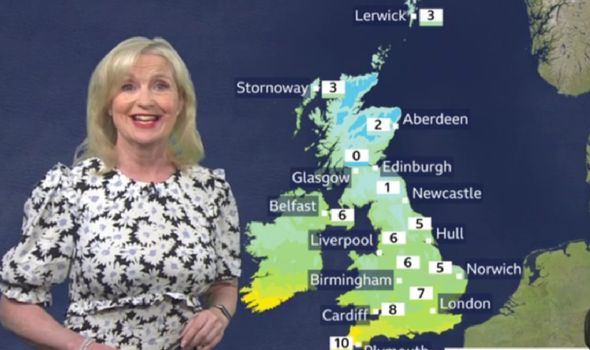 “High pressure should return from the southwest towards mid-May and dry things out.

“Towards the end of May there are some encouraging signs for high pressure to shift east, allowing warmer but wetter weather to develop.”

Ms Kirkwood said: “Through the course of the day for Friday we will see further showers develop.

“This will be especially true of eastern Scotland and eastern England where they could be heavy and thunder with some hail.

“Later on the cloud will thicken across the southwest and herald in some rain later again.”

Temperatures are expected to be coldest at 7 degrees in Lerwick and warmest in London at 14 degrees.