Bitter Arctic winds will grip the UK, plunging the country into colder temperatures, according to the latest BBC weather forecast. Temperatures on exposed coasts in the north on Monday will struggle past 14C, while heavy rain will hit southern regions of the UK. This comes just days after the UK recorded its hottest day of the year so far, with London’s Heathrow Airport hitting 28.6C (83.48F) on Monday.

However, BBC meteorologist Louise Lear said that temperatures will warm up through the week, as temperatures return to normal.

This will see a 7C temperature jump from 15C in London on Monday to 22C by Friday.

Ms Lear told BBC Breakfast viewers: “It was a funny day yesterday. Blue skies and sunshine out in the west, while out to the east we had a month’s worth of rain. It was miserable.

“Today much, much quieter I’m pleased to say.”

JUST IN: Met Office explains incredible reason why the UK is facing lightning 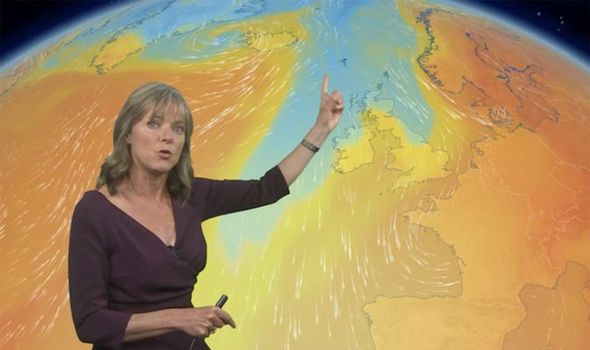 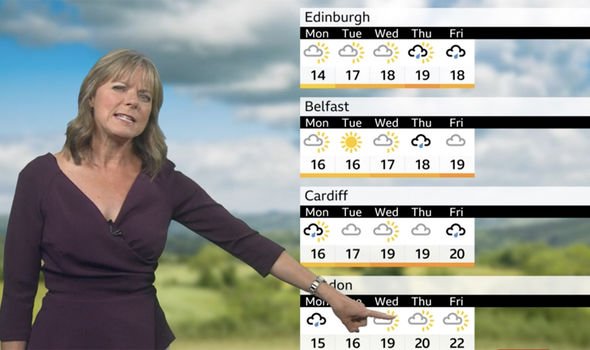 She continued: “It is going to be a grey start for many. Hopefully, that cloud will thin and break the further north and west you are.

“But it may well stay overcast into the far south-east. Temperatures will peak at around 21 to 22C out to the west.”

She added that pollen levels will “remain high for most of us”.

Ms Lear told viewers: “On Sunday, there will be some heavy outbreaks of rain across south-east England overnight. 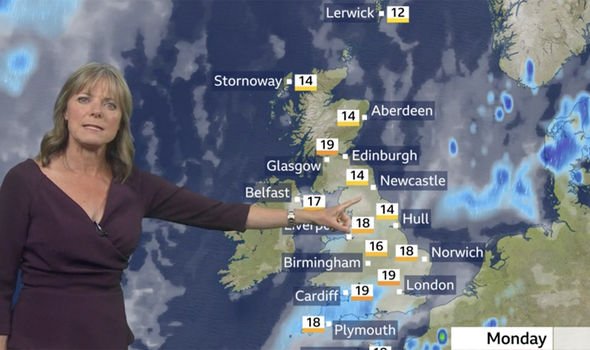 BBC Weather: Parts of UK set to be hit by severe storms

“But that will clear away by the afternoon. It is not a bad afternoon for most of us. Plenty of opportunities to get outside. Temperatures will peak into the high-teens.

“On Monday, the wind direction will swing around to a northerly direction and that will continue to drive in some cooler air, particularly through the North Sea. 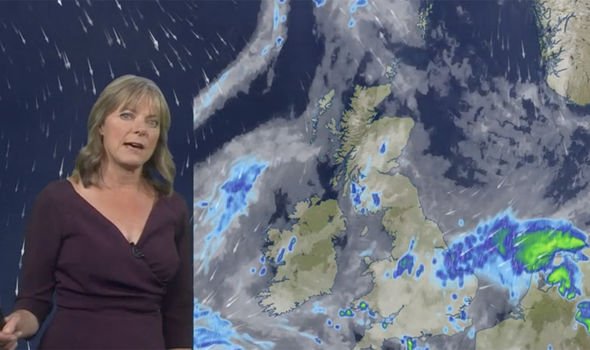 Ms Lear added: “In the south, there will be further outbreaks of rain. That generally sets us up for the week.

“Not a scorcher like we had the week just gone. There will be rain around to start with but high pressure builds and warms things up.

“These temperatures are about whether they should be for this time of year.”

The Met Office has issued a yellow rain weather warning for much of England.

The Environment Agency has also issued 39 flood alerts in London, Kent, parts of the Home Counties, the West Midlands and Wiltshire after some areas saw up to 67mm of rain.