State introduces fines as high as 20,000 dollars for people who breach their isolation orders. 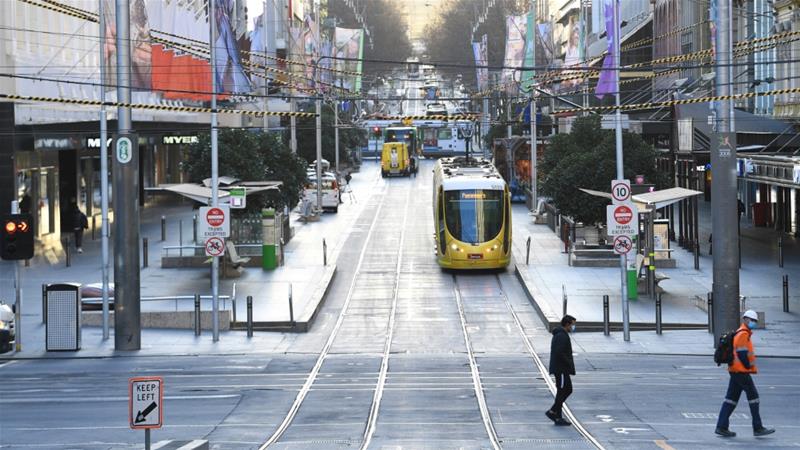 Military personnel will be deployed to enforce COVID-19 isolation orders in Australia’s Victoria, according to the state’s premier, with anyone caught in breach of those rules facing fines as high as 20,000 Australian dollars ($14,250).

The tough penalties on Tuesday came as Australia’s second-most populous state struggles to slow the spread of the coronavirus.

Daniel Andrews, Victoria’s premier, told reporters that military and health teams had randomly visited more than 3,000 homes of people who should have been self-isolating because they had tested positive or were awaiting test results for the virus.

But in “more than 800 of those homes, the person who should have been isolating could not be found,” Andrews said in Melbourne, the Victorian capital. “That is completely unacceptable.”

Some 500 military personnel will this week deploy to the state to bolster enforcement of self-isolation orders, the premier said, with fines of nearly 5,000 Australian dollars ($3,559) for breaching stay-at-home orders.

The only exemption will be for urgent medical care.

“There is literally no reason for you to leave your home, and if you were to leave your home and not be found there, you will have a very difficult time convincing Victoria police that you have a lawful reason,” he said.

Repeat offenders face a fine of up to 20,000 Australian dollars, he added.

Australia has recorded nearly 19,000 COVID-19 cases and 232 fatalities, nearly 12,000 of them logged in southeastern Victoria.

Andrews has declared a state of disaster across the state and imposed a nightly curfew from 8pm to 5am for six weeks in Melbourne.

On Tuesday, Victoria reported 439 new COVID-19 cases in the past 24 hours.

Andrews said 11 people had died from the virus since Monday, bringing the state’s death toll to 136. The virus has spread significantly through Victoria’s elder care facilities, with many of the deaths among the elderly.

State officials said the latest wave of COVID-19 infections has been driven by residents refusing to adhere to restrictions on their movements.

With concerns that many people feel they have no choice but to continue working after a COVID-19 diagnosis, Australia said on Monday it would pay people in the state 1,500 Australian dollars to stay home if they were ordered to and they do not have leave entitlements.

Many internal state borders have been closed, keeping the new wave of infections predominately limited to Victoria, with neighbouring New South Wales (NSW) reporting the next-highest number of cases.

NSW on Tuesday reported 12 new cases, though all the cases can be traced back to known outbreaks, some of which were started by infected people travelling from Victoria.