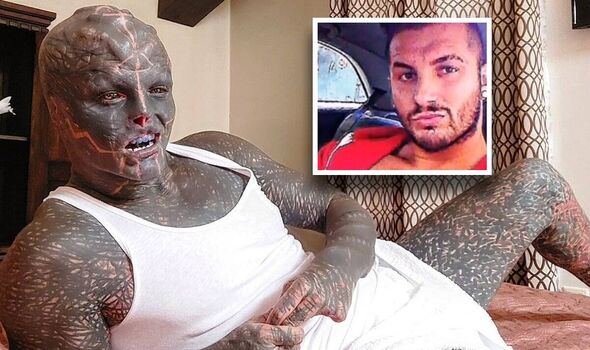 A tattoo addict who underwent extreme body modification to become a “black alien” has complained restaurants won’t serve him. Anthony Loffredo, 33, has had tattoos all over his body and remaining fingers and his ears and nostrils cut off, all in the name of looking like an extraterrestrial. He has said in the past he is even planning on getting a leg amputation for the cause.

Loffredo, from France, recently appeared on LadBible TV and spoke of the criticism he has faced for his transformation.

The man said he compared himself to those who change their sex and was born into a body he didn’t belong in.

He added that he had to make peace with the fact people remained “closed-minded”.

“If I want to eat at a restaurant, sometimes the server says I can’t eat on the terrace,” the alien wannabe said.

“There are people who are closed-minded. That’s the way it is. That’s how it will be for all of humanity. It’s like that. That’s the balance.”

However, he said there are people who thank him because they feel more secure in their bodies.

Mr Loffredo has covered his entire body, including his eyes, in dark tattoos. He has also had his nostrils, ears and two of his fingers cut off in Mexico.

He even suggested he might split his penis in two, which shocked many of his Instagram audience.

His upper lip has also been nearly fully removed, causing him difficulty to speak. He has also had dozens of implants around his skin.

Many of the modifications he has made are dangerous and illegal in Europe and the US.

In the past, Mr Loffredo said being like this made it a “fight every day” because people want to judge him.

He told Club 113 podcast: “I can’t find a job, there’s lots of negative stuff. It could be positive because you feel better, but you have to know there’s also a dark side.

“It’s a fight every day, because every day you find new people who don’t understand, who want to judge.

“It’s life, not everyone understands everything. Like me, I don’t understand lots of things about lots of people.

“You can’t judge someone, no one knows what’s inside someone’s head, why they’re doing that, you need to talk with this person.”

Despite the extreme modifications, the ET wannabe regularly tells his audience on his Black Alien Project Evolution Instagram page that he isn’t done yet.

A graphic video he posted showed Loffredo lying on a surgery table in front of surgeons who had seemingly just cut off his fingers. He looked at his hand in awe.

One user recently commented on his most recent post: “Please Stop. Human body can not support so much ink and so many surgeries without harmful effect on health. This is public suicide! Just stop here.”

Another wrote: “As much as cool and crazy is to watch you going forward with your project I don’t think there is a person who would like their child going into your steps.”