Racist abuse of Asians continues on social media despite pledges by Facebook, Twitter and TikTok to tackle issue. 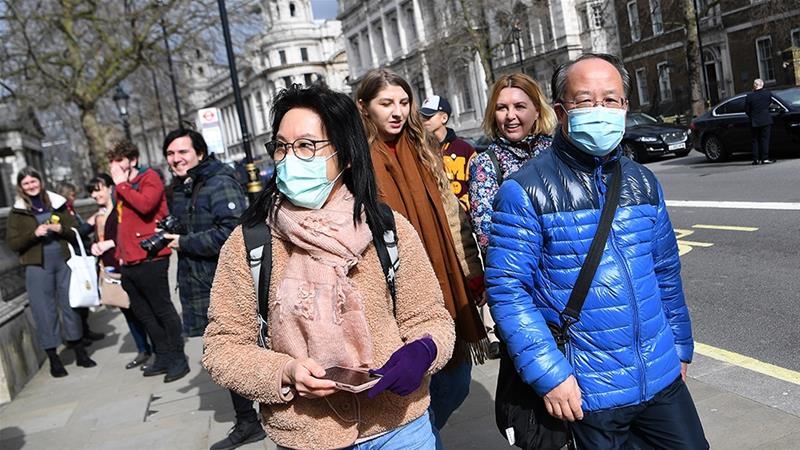 Jing He has become used to online racist abuse.

The 26-year old from Shanghai began posting a video diary about the COVID-19 outbreak to her social media accounts in early March. Her aim was to depict life in her home city as the epidemic peaked in China.

More than 60,000 people viewed her first Facebook video on the topic, with many sharing messages of thanks and support.

But virulent, hateful abuse began to appear on later posts.

One comment under a video Jing made for the Facebook page of the China Minutes news site mocked the appearance of Asian people, referring to them as “slanty eyed b****rd’s”. Another detailed a conspiracy theory of how China was responsible for the virus as a means of population control.

These posts and many others, which appear to have since been removed, left Jing “hurt” and wondering whether she should ever share her content again.

“I wasn’t expecting it,” she said. “Racism is never okay.”

Jing is far from alone in being subjected to racist abuse around the outbreak of COVID-19.

There have been numerous reports of anti-Asian racism on the streets of Australia, India and the United Kingdom. In the United States, the reporting forum Stop AAPI Hate has recorded more than 1,100 instances of anti-Asian harassment since it was set up in late March.

On social media sites, the scale of abuse is even more apparent.

An analysis by Al Jazeera found more than 10,000 posts on Twitter that included the term “kung-flu” during March alone – although the true total was likely much higher given a number of variations of the phrase were being used across the site.

While some uses of “kung-flu” related to news reports of a White House official allegedly using the term, thousands of others sought to employ it to describe the virus or to antagonise users who were offended by its use. Other posts employing racist and offensive language such as “chop fluey” and “rice rabies” were also visible on the micro-blogging platform.

Elsewhere, there had been 110 million views of posts tagged #chinese_coronavirus on the Chinese-owned app TikTok as of Saturday. Some videos lamented the use of such terms as a subtle form of racism. Others, however, included a clip of a man with chopsticks in his hair and pulling his eyes back to audio of US President Donald Trump explaining why he called COVID-19 the “Chinese virus”.

A separate post seen by Al Jazeera showed a picture of a man in a hazmat suit with accompanying text stating he was “just going to pickup [sic] a Chinese”.

On the photo-sharing app Instagram, which is owned by Facebook, Al Jazeera found 72,000 posts tagged #WuhanVirus and 10,000 tagged #KungFlu.

Although the first cases of coronavirus were reported in Wuhan, China, the World Health Organization (WHO) employs the name COVID-19 so as not to stigmatise any ethnic group or nationality and give rise to harmful stereotypes.

Responding to Al Jazeera, a Facebook company spokesperson said: “Racism and abusive behaviour is not tolerated on Facebook or Instagram and we remove it when we become aware of it. Those who repeatedly break our guidelines will be banned. We encourage people to report this content when they see it, so we can act.”

Twitter said it was “continuing to review and require the removal of Tweets that do not follow the Twitter Rules – half of which we catch before they’re ever reported to us”. It added that it would “remain vigilant” of the “evolving global conversation”.

Al Jazeera reached out to TikTok but the company did not provide an on the record response.

None of the companies contacted by Al Jazeera responded to questions about how many posts they had taken down or the number of users they had reprimanded for racist, xenophobic and inappropriate content since the outbreak began.

Twitter, Instagram, Facebook and TikTok have all taken action to ensure reliable sources of information on COVID-19 are promoted high on their sites and atop searches and user feeds. The platforms have also been used for campaigns such as #IamNOTAVIRUS which have sought to counter racist narratives as well as empower those who have faced abuse.

Research by the Atlantic Council think-tank’s Digital Forensics Lab (DFRLab) noted there was a significant spike in social media posts employing “dog whistle” terms such as “Chinese virus” after they had been used in news conferences or on news shows by US politicians.

Such findings emphasise that what appears on social media is often a reflection of what happens in the real world.

However, politicians and activists Al Jazeera spoke to believe there is still far more the platforms can do to confront online racism.

Sarah Owen, a UK member of parliament and chair of the Chinese for Labour group, said many social media sites “have not adequately dealt with racism, homophobia or any other kind of abuse in the past”.

Owen, who is British-Chinese, said she had been subjected to “old-fashioned racist tropes” when posting about the pandemic online, including “accusations that we all eat strange things”. She added that the “use of racist language, especially by public figures, and attributing this virus to just one ethnicity” also pours “fuel [on] existing prejudices”.

Cynthia Choi of the US-based Chinese for Affirmative Action said “a reference to the coronavirus/COVID19 other than its scientific name is irresponsible and goes against every leading public health expert because of the stigmatising effect”.

She added that “online verbal abuse and threats of violence can lead to offline acts”.

Yet having now had time to process the abuse and the hurt it initially caused, she now does not blame the platforms but rather the people who posted the comments themselves.

“If you are racist towards me or have hate towards me, you have hate in you,” Jing said. She is also grateful to commenters who stood up for her and tried to shout down those directing the abuse in subsequent posts.

“If more people call this out, that’s how we slowly overpower the force of racism,” she said. “I feel they [those posting abuse] are blaming a race for what they are responsible for in their own lives.”

More than anything, “we need to call them out”.