On anniversary of deadly dispersal of a sit-in protest, rape survivors describe the horror at the hands of militiamen.

Dozens of women raped by Sudanese security forces over the course of a few hours on June 3, 2019, are still seeking justice, a year after a brutal crackdown that left at least 87 people dead.

In a rampage that day, members of the notorious paramilitary Rapid Support Forces (RSF) and other troops tore apart a sit-in camp in the capital, Khartoum, where protesters had been demanding for weeks that the military give up power.

A military-backed prosecutor said no rapes or sexual assaults took place during the violence. But over the past year, activists have been documenting what they say was a campaign of rapes ordered by the military’s leadership to crush the pro-democracy movement.

“It was an orchestrated scenario… All was by order and systematic,” said Sulima Ishaq Sharif, who at the time headed a trauma centre at Khartoum’s Ahfad University.

Both experts say the real number is considerably higher, since many victims do not speak out for fear of reprisal or the stigma connected to rape, and that many more women were sexually assaulted as well as several men.

Identifying and prosecuting those behind the violence is a major test of whether Sudan can shed its decades-long military rule.

The protest movement, which began in 2018, succeeded in overthrowing longtime ruler, President Omar al-Bashir, in April 2019 and forcing the creation of a joint civilian-military ruling “sovereign council”.

But the civilians are struggling to assert authority in the face of the military’s power. Most notably, the council’s deputy head is the commander of the RSF, General Mohamed Hamdan Dagalo, who is considered the strongest man in the leadership and enjoys the backing of Saudi Arabia and the United Arab Emirates.

An independent commission investigating the violence already missed one deadline in February for releasing its conclusions. It may also miss a new deadline, June 22, because work has halted amid the coronavirus pandemic, said the commission’s head Nabil Adib.

Still, Adib said the panel has taken testimony from some 3,000 witnesses. It “found a number of crimes, including rape, that were committed during the dispersal, and also identified some suspects”, he said, refusing to give details.

Victims and activists have little faith the military will allow any findings that implicate top generals.

Dagalo and the military have said the troops that day had no orders to clear the camp, only to clamp down on part of it where drug-dealing and other crimes were allegedly taking place.

Spokesmen for the military and the RSF did not respond to multiple requests for comment.

‘Chills through my body’

Rape victims told similar stories of RSF soldiers corralling men and women who fled the protest site, beating them, sexually molesting the women and gang-raping some. By their accounts, the rapes took place in specific locations – a medical complex, a cemetery, and the grounds of Khartoum University’s mosque.

The women’s ordeal embodies the terrible personal price paid by activists in crackdowns that have crushed pro-democracy movements around the Middle East in recent years.

For Samah, a 28-year-old teacher, the wounds of her gang-rape that day are reopened whenever she sees Dagalo on TV.

“Watching him sends chills through my body,” she said.

Women took a major role at the sit-in, often giving speeches to the crowds. They were celebrated with the nickname “kandaka” – a title of ancient Nubian queens that became a slogan and symbol of the protests.

After the protest forced al-Bashir’s fall, the military took sole power, but the protesters refused to end their sit-in, demanding a civilian government.

The RSF grew out of the so-called Janjaweed militias, which al-Bashir mobilised to fight in the Darfur conflict in the early 2000s. They were notorious for killings and rapes of civilians there, according to rights groups.

In mid-May 2019, about 1,000 RSF fighters were brought from Darfur to a base in Omdurman, adjacent to Khartoum, three RSF officers said on condition of anonymity because they were not authorised to talk to the press.

Around 3am on June 3, they descended on the sit-in. About 1,300 protesters found themselves encircled as forces set on them with live ammunition, tear gas, whips and sticks.

Samah was asleep in a tent when gunfire erupted. She heard screaming and saw people running in panic as security forces fired. Some fell to the ground, bleeding.

She ran barefoot from the tent. Blocks away, outside the al-Bashir Medical Center, she was caught by RSF troops rounding up whomever they could grab. Samah saw them pull a woman away, shouting they would rape her. She heard the woman screaming.

Other troops dragged Samah into a hallway in the medical centre. One hit her with the butt of his rifle. “If you open your mouth, I’ll kill you, whore,” he shouted.

They groped her as they stripped her and shoved her to the ground. One pinned her hands to the floor while another fell on top of her, biting her breasts, as hands grabbed her everywhere.

“I was trying to scream, but they shut my mouth,” Samah said, adding three of them raped her. “They did not do this for enjoyment. They did so to break us down.”

They left her naked and bloody on the hall floor. She covered herself with what was left of her clothes, then found some other protesters hiding in a nearby clinic. “I didn’t tell them I’d been raped, but I think they knew from my condition.”

At the same time, dozens of protesters hid in the Khartoum University mosque.

“We thought it would be safe there,” said Sayeda, a mother of three.

Soldiers broke in, beating people. In a mad rush, the men and women inside fled, some running into a building under construction in the courtyard and piling out its windows.

The troops shouted insults and threats of rape, said Sara Ali Abdulla, a doctor who managed to get out of the mosque compound. “We heard women screaming and crying,” as they were raped, she said.

Sayeda was grabbed as she tried to flee out the mosque’s back door.

She pleaded with the soldiers to let her go home to her children. When they groped her, she slapped one, and they turned brutal, beating her. They pulled off her clothes and cut away her underwear. Four of them raped her, biting her breasts so hard they bled, she said.

After an hour, they left her half-conscious on the ground. She covered herself with her robe and sat there crying. “I was so tired I couldn’t walk,” she said.

In the following weeks, Dagalo, the RSF commander, expressed regret over the violence. He said whoever went beyond orders and plotted to break up the camp would be identified.

A military-backed prosecutor said eight RSF officers, including a major-general, had been charged with crimes against humanity. But there has been no word since of any being tried or detained.

Meanwhile, the military struck a compromise deal that August. The Sovereign Council, made up of military officers and civilians from the protest movement, was created to govern until the end of 2022. Under the same deal, the independent investigation was created.

Mayada is one of the many impoverished women who sell tea on the sidewalks of Khartoum. When the sit-in camp sprang up in front of the main military headquarters in downtown Khartoum in April 2019 – the culmination of months of protests – she set up her tea stand in the square.

She managed to escape the June 3, 2019, dispersal but returned several hours later when security forces clamped down with a citywide curfew. She headed to the Ophthalmology Hospital, near the square, where she kept her plastic chairs, teapots and cups.

Four RSF soldiers harassed her the whole way there. They entered the courtyard behind her and sprayed something in her face. She felt woozy. The four stripped and raped her, she said.

When she regained consciousness, she lay in agony. “Everything hurt. I was like a grandmother who lost her power to even walk.”

Months later, Mayada had not gotten her period. Soon it was confirmed, she was carrying twins.

She wanted to end the pregnancy, but a pharmacist refused to sell her pills to cause an abortion. She hurt herself, lifting heavy objects and throwing herself off furniture, hoping for a miscarriage.

In March, she gave birth to a baby girl, Marwa. The other twin, a boy, was stillborn.

She does not know the names of the men who raped her, much less who is the father of her child. That means she cannot get Marwa a birth certificate. Since her pregnancy, she said she has been weak and faints often, so she sent Marwa to a foster home, hoping one day to take her back.

It was useless to talk to investigators, she said. “Those who ordered the break-up are very well known … but they are untouchable.”

Most of the women never told their husbands or families what happened and wrestled with the trauma in secret.

“There has been this psychological pain that will never end, that can’t be described in words,” Samah said.

She wakes up terrified at night, because she sees her rapists’ faces in her sleep. She never goes to downtown Khartoum. She avoids looking at her body.

“I feel ashamed of myself,” she said. “Sometimes, my body trembles when my husband touches me.”

Sayeda spoke twice with a doctor. Fearing she would harm herself, the doctor tried to change the context of the trauma. She told her, “Look at the positive things we have achieved in the revolution, like removing al-Bashir. All our sacrifices were not in vain.”

Sayeda found that little consolation. Only her children give her will to survive, she said. She expects nothing from the self-described “government of the revolution”.

“It is God who will avenge me.” 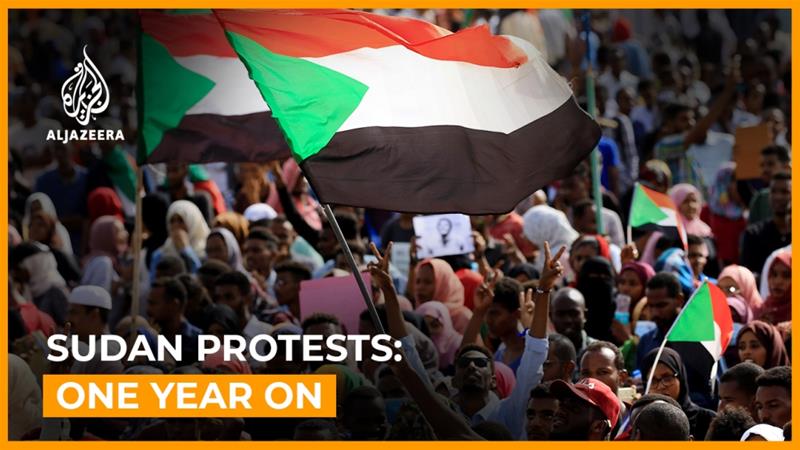 Sudan protests: One year on