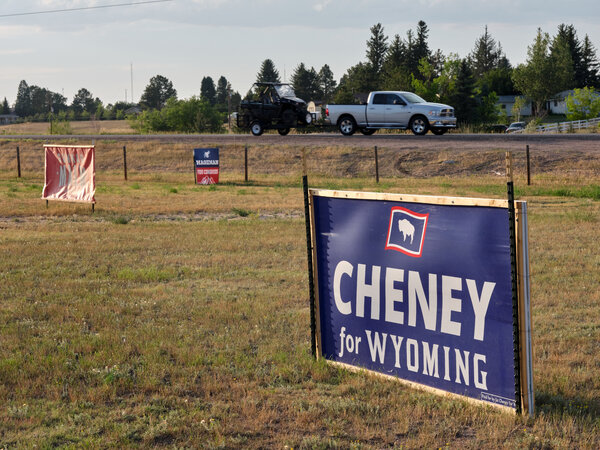 Much of the United States should be asleep by the time the first definitive election results pour in on Tuesday from Wyoming and Alaska, given their locations in western time zones and one state’s new election format.

In Wyoming, Representative Liz Cheney is girding for a Republican primary defeat to Harriet Hageman, a rival who has former President Donald J. Trump’s backing. In Alaska, former Gov. Sarah Palin is trying for a comeback in the open race for the state’s sole seat in Congress, and Senator Lisa Murkowski is in a re-election fight against a field led by Kelly Tshibaka, whom Mr. Trump endorsed.

The polls in Wyoming do not close until 9 p.m. Eastern time.

The state does not report interim results in real time online the way some others do, waiting instead to post completed unofficial tallies once they are received, according to Monique Meese, a spokeswoman for Wyoming’s secretary of state.

But Wyoming’s recent election history suggests that The Associated Press should be able to determine who won in all but the closest races by Wednesday, said Stephen Ohlemacher, The A.P.’s election decision editor.

In the 2020 general election, 100 percent of Wyoming’s precincts had reported election results as of 2:49 a.m. Eastern time on Nov. 4, according to The A.P.

If the polls are accurate, the Republican primary for the state’s lone House seat may not be a drawn-out affair. Ms. Cheney, who has been vilified by Mr. Trump for her vote to impeach him and her role as vice chairwoman of the Jan. 6 committee, is badly trailing Ms. Hageman in the polls.

The situation in Alaska, where most polls won’t close until midnight Eastern time, is considerably more murky.

The state will report its first results online at 1 a.m. Eastern time and update them throughout the night, said Gail Fenumiai, director of the state’s Division of Elections.

But the initial results will reflect only votes cast in person on Tuesday and those cast at early-voting centers, Mr. Ohlemacher noted. Additional results are scheduled to be released on Aug. 23, Aug. 26 and Aug. 31, he said.

In Alaska, absentee ballots must be postmarked by Tuesday but have until Aug. 26 to be received at state election offices.

Further complicating the timing of results is the introduction of ranked-choice voting in general elections in Alaska. The system will be used in the special House race to fill the seat of Representative Don Young, a Republican who died in March, for the remainder of his term that ends in January.

Voters will rank their choices in the special election. If no candidate receives a majority, officials will eliminate the last-place finisher and reallocate his or her supporters’ votes to their second choices until one candidate has at least 50 percent of the votes.

Only first-choice votes will be released on election night, with the full results not released until Aug. 31, according to The A.P.