Business Secretary Alok Sharma unveiled measures to boost the supply of personal protective equipment, such as face masks, to protect staff during the coronavirus crisis. Official rules which made it difficult to produce more hand sanitiser will also be ditched. Mr Sharma said: “New suppliers and businesses that produce ingredients for safe hand sanitiser will be able to bring their products to market in a matter of days. Companies including BrewDog and Ineos have already stepped forward to offer their services.”

The Health and Safety Executive and local authorities will be asked to fast-track PPE through the product safety assessment process, and to make this a priority over “market surveillance activity”.

PPE equipment that gives protection against Covid-19 but lacks the official CE health and safety mark will be allowed if safety requirements are met.

The business secretary also announced a shake-up of Britain’s bankruptcy rules so companies in the process of restructuring can continue to get hold of supplies and raw materials.

There will also be a temporary suspension of “wrongful trading” provisions for company directors to “remove the threat of personal liability during the pandemic”.

And rules concerning annual general meetings will be reformed so large gatherings of people in a single space can be avoided.

Mr Sharma said the new options may include “postponing or holding the AGM online or by phone using only proxy voting”.

Speaking in Downing Street, he said: “I’m incredibly proud of how our businesses and individuals across our great nation have risen to the challenge posed by Covid-19.”

Outlining changes intended to stop companies going bust, he said: “We will introduce measures to improve the insolvency system, which provides the legal options for companies running into major difficulties. 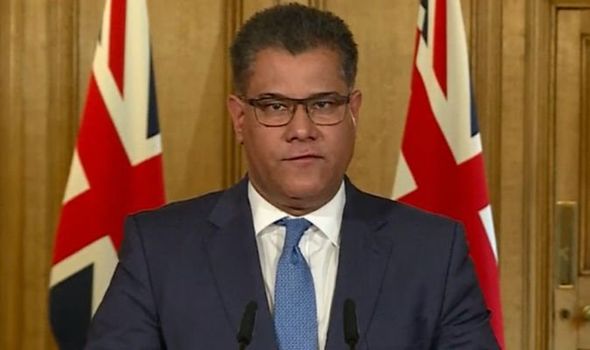 “Our overriding objective is to help UK companies which need to undergo a financial rescue or restructuring process to keep trading.

“These measures will give those firms extra time and space to weather the storm and be ready when the crisis ends, while ensuring that creditors get the best return possible in the circumstances.”

Mr Sharma pledged the Government would continue to “fight tooth and nail to protect lives and livelihoods everywhere in this country as we stand shoulder to shoulder with our people and our businesses”.

It follow a series of similar actions, including the temporary suspension of competition rules for supermarkets.

In a further shake-up, workers who have not taken their statutory leave due to Covid-19 can now carry it into the next two years. Mr Sharma said: “From retailers sharing delivery vans to ferry operators coordinating staff, these measures will allow firms to work together to deliver vital services to the public more effectively at this time.”

James Watt, the co-founder of BrewDog, said: “We started making hand sanitiser at our distillery in Aberdeenshire in response to the national shortage and are providing it free to charities and frontline workers.”

The Royal Mint is to manufacture up to 4,000 medical visors per day to help protect NHS staff.

‘Even with support it is tough’

On Friday my daughter had her first drumming lesson on a Zoom video call.

It went really well, but even using this technology, my daughter’s drumming teacher has seen his income fall to just one third of pre-virus levels.

Still better than my mate, who is a swimming teacher with no pool and has had all his work cancelled.

But the Government has now delivered cash grants for the self-employed and the Job Retention Scheme to keep “furloughed” employees from being made redundant. There are a number of households that still fall between the cracks, but I doubt more help is coming.

Around the world, millions are losing their jobs and livelihoods. Although state support for those financially hit by the coronavirus varies from country to country, globally, unemployment is rising rapidly – even faster than during the 2008 financial crisis.

On Tuesday Norway announced unemployment had soared to 10.9 percent, the highest since the Second World War and up from just 2.3 percent in February. On Thursday data released from America’s Department of Labor showed the same story, with unemployment benefit claims surging to over 3.3 million in just one week.

After this, one member of the Federal Reserve (the US central bank) warned that up to 46 million people – nearly a third of US workers – could lose their jobs in the short term.

At the start of the week, the UN’s International Labour Organisation was predicting up to 25 million could lose their jobs. It now fears that is way too low.

In the UK, over nine days, almost half a million households applied for Universal Credit benefit for those on low income or without work – more than in any full month during the 2008 financial crisis.

So has the Chancellor done enough? Some businesses will go under, with job losses. Companies also do not have to “furlough” employees and may decide, with tough times ahead, to cut staff.

And the self-employed, the zero hours workers, will be the first to be cut.

Even with government support, tough times are coming.