The Prime Minister tore into Labour’s record and told MPs he had delivered on all his promises to the British people. Mr Johnson said he “got all the big calls right” as he faced a confidence vote in the Commons.

He said: “We got Brexit done and though the rejoiners and the revengers were left plotting and planning and biding their time – and I’ll have more to say about the events of the last few weeks and months in due course – we delivered on every single one of our promises.”

Mr Johnson said he was proud to have been able to “offer leadership in difficult times”.

“This Government has fought some of the hardest yards in modern political history, we’ve had to take some of the bleakest decisions since the war and I believe we got the big calls right,” he added.

“And at the end of three years this country is visibly using its new-found independence to turbocharge our natural advantages as the best place in the world not just to live and to invest, but to bring up a family.

“And with a new and incontrovertible spirit of global leadership, I believe we can look to the future with a rock-solid confidence not just in what this Government has done, but in what it will do and will continue to do.”

The Prime Minister insisted the Conservatives would defeat any attempts to overturn Brexit. 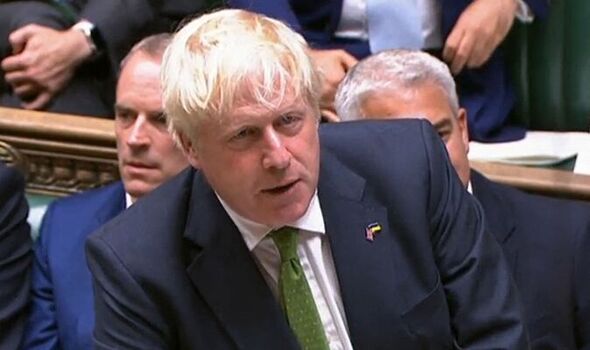 “Some people will say as I leave office that this is the end of Brexit, oh yes, and the Leader of the Opposition and the deep state will prevail in its plot to haul us back into alignment with the EU as a prelude to our eventual return, and we on this side of the House will prove them wrong, won’t we?” he said.

Mr Johnson moved a motion of confidence in his Government, which would almost certainly trigger a general election, after Labour demanded a vote.

Mr Corbyn accused the PM of giving a “fantasy tour” of the the UK and his time in office, and claimed he is leaving a legacy of “poverty, inequality and insecurity”.

Mr Johnson hit back, telling the ex-Labour leader his government has reduced unemployment  to record lows, adding: “I know that he would rather have people on benefits, but I don’t think that’s the way forward.”

Sir Keir continued the Labour attacks, claiming Mr Johnson “behaved exactly as everyone feared” when he got into Downing Street.

“He lurched from one scandal to the next, he demeaned his office and he started to drag everyone and everything down with him,” he added.

Conservative Sir Edward Leigh said he “wholly regrets” the departure of this Prime Minister and said the party would too.

He said Sir Keir’s response to the Prime Minister was filled with “vituperation and insult and sheer nastiness”.

Sir Edward said Parliament’s reputation “was in tatters” when Mr Johnson took office because of the Brexit deadlock, and addressing criticism of the pandemic response, he said “it’s a disgraceful attack”, saying the Government’s record on the pandemic is “second to none” and “thousands of people are now alive because of this Prime Minister”.