Barr faces criticism over his actions, which Democrats say have politicised the Justice Department to support Trump. 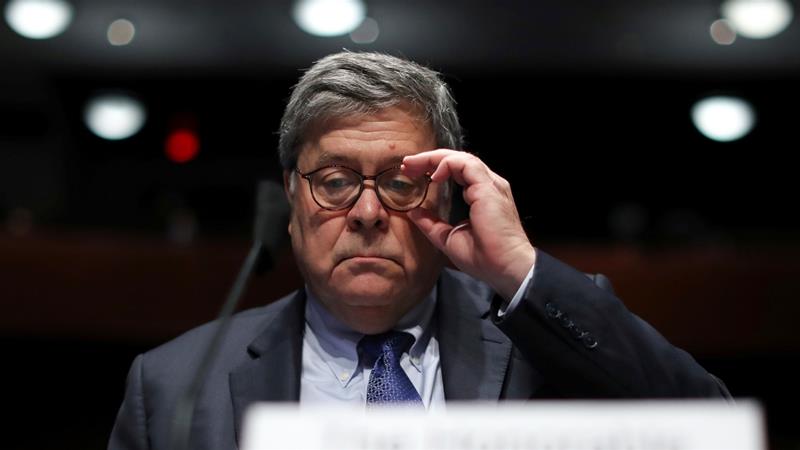 Attorney General William Barr is defending the aggressive federal law enforcement response to civil unrest in the United States, saying that “violent rioters and anarchists have hijacked legitimate protests” sparked by George Floyd’s death at the hands of Minneapolis police.

Barr will tell members of the House Judiciary Committee at a much-anticipated hearing on Tuesday that the violence taking place in Portland, Oregon and other cities is disconnected from the death of Floyd, which he described as a “horrible” event that prompted a necessary national reckoning on the relationship between the Black community and law enforcement.

“Largely absent from these scenes of destruction are even superficial attempts by the rioters to connect their actions to George Floyd’s death or any legitimate call for reform,” Barr will say of the Portland protests, according to a copy of his prepared remarks released by the Justice Department on Monday.

The Trump administration has singled out “anarchists” and Antifa, a loose grouping of anti-fascist activists, some of whom are anarchists, to blame for much of the unrest. Trump even threatened to label Antifa a “terrorist” organisation, though there appears to be no cause or legal justification to do so.

Barr will also touch on other controversies that have shadowed his tenure, including his handling of the investigation into Trump campaign ties to Russia, which he derisively refers to as “the bogus ‘Russiagate’ scandal”.

The testimony underscores the Justice Department’s continuing effort to differentiate between increasing violence in some cities and the death of Floyd, which civil rights prosecutors are investigating as a potential crime. Enormous but peaceful demonstrations had followed Floyd’s death in May.

The attorney general, speaking as Congress and the public pay respects to the late Representative John Lewis, will acknowledge to legislators that Floyd’s death struck a chord in the Black community because it reinforced concerns that Black people are treated differently by police. 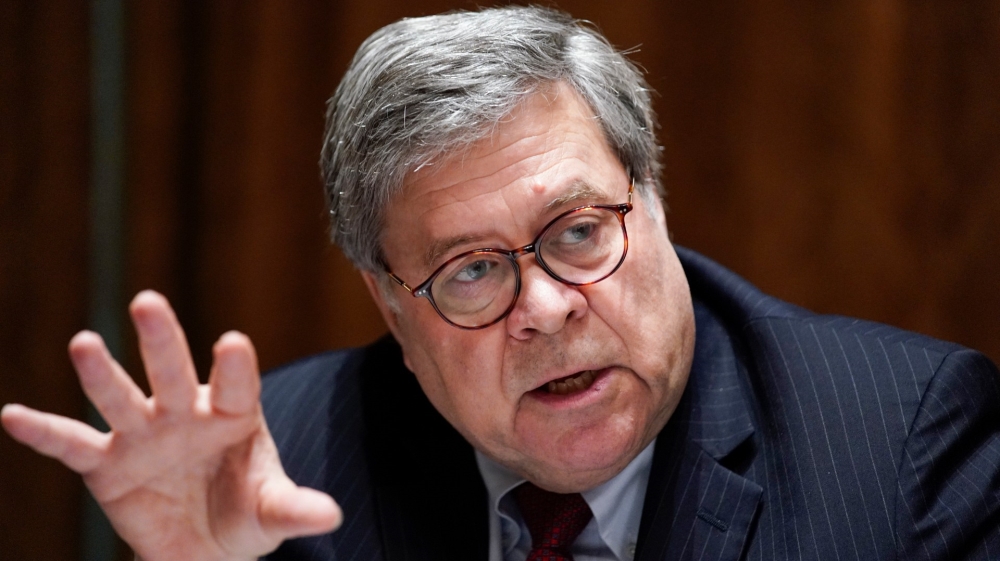 But he will also condemn Americans who he says have responded inappropriately to Floyd’s death through what he said was rioting and anarchy.

“As elected officials of the federal government, every Member of this Committee – regardless of your political views or your feelings about the Trump Administration – should condemn violence against federal officers and destruction of federal property,” Barr’s testimony states. “So should state and local leaders who have a responsibility to keep their communities safe. To tacitly condone destruction and anarchy is to abandon the basic rule-of-law principles that should unite us even in a politically divisive time.”

Civil unrest escalated in Portland after federal agents were accused of whisking people away in unmarked cars without probable cause; they were detained and later released.

And in Washington, DC, peaceful protesters were violently cleared from the streets by federal officers using smoke bombs and pepper balls before a photo op by Trump in front of a church, on June 1 where Barr had accompanied him.

In separate testimony on Capitol Hill Tuesday, Army National Guard Major Adam DeMarco will say that Barr spoke to Park Police before they launched their assault. In prepared remarks, he said the legally required warnings to demonstrators were “barely audible” and apparently not heard by protesters.

The attorney general has defended as necessary the broad use of law enforcement power to deal with the situation, but the department’s internal watchdog has opened investigations into the use of force and other tactics by agents in both cities.

The hearing on Tuesday marks Barr’s first appearance before the House Judiciary Committee, bringing him face-to-face with a panel that voted last year to hold him in contempt and is holding hearings on what Democrats allege is politicisation of the Justice Department under his watch.

It comes during a tumultuous stretch in which Barr has taken a series of actions cheered by President Donald Trump but condemned by Democrats and other critics.

Barr made reference in his prepared statement to that antagonistic relationship, saying that “many of the Democrats on this Committee have attempted to discredit me by conjuring up a narrative that I am simply the President’s factotum who disposes of criminal cases according to his instructions.

“Judging from the letter inviting me to this hearing, that appears to be your agenda today.”

Beyond the federal response to the demonstrations, Barr is also expected to be pressed in detail about his intervention in criminal cases arising from special counsel Robert Mueller’s Russia investigation. The hearing will provide Barr with a forum to offer his most detailed account to date for his actions in the criminal cases, which he has said were taken in the interests of justice and without political pressure.

Those include the Justice Department’s decision to drop the prosecution of former Trump administration National Security Adviser Michael Flynn – a request now tied up in court – and his firing last month of the top federal prosecutor in Manhattan, whose office oversaw investigations into allies of the president.

That decision was at the centre of a separate hearing before the same committee last month, when one of the prosecutors alleged that politics from Justice Department leadership had influenced the handling of the sentence.

On Monday, House Speaker Nancy Pelosi said on MSNBC that Democrats want to question Barr about how Trump “is undermining the Constitution of the United States”. Barr previously rebuffed the House committee and Pelosi said that “we hope that he will show up.”

In the past, Barr has said Flynn, who pleaded guilty as part of Mueller’s probe to lying to the FBI, should never have been charged and that the original sentencing recommendation for Stone – also charged in the Mueller investigation – was excessive.

Barr’s opening statement does not delve into the details of the case, though he will insist Tuesday that Trump has not attempted to interfere in those decisions and has “played a role properly and traditionally played by President”.

Republican legislators have been overwhelmingly supportive of Barr’s performance and are likely Tuesday to help him push back against some of the Democratic criticism. Even among the GOP members, though, Barr faces pressure to deliver results soon on an investigation that he initiated into the origins of the Russia probe.

It is not clear when or how that investigation, being led by US Attorney John Durham of Connecticut, will end, but Barr has said he hopes to have results in the coming months.