WASHINGTON — One president all but declared victory over the pandemic, hailing new vaccines as a “medical miracle” and congratulating himself for doing what “nobody has ever seen before.” The next president declared the pandemic deadlier than ever, calling it a “mass casualty” event that is leaving “a gaping hole” in America with more misery to come.

“We’re here to discuss a monumental national achievement,” President Trump boasted on one screen. “From the instant the coronavirus invaded our shores, we raced into action.”

“We’re in a very dark winter,” President-elect Joseph R. Biden Jr. said minutes later in his own speech on another screen. “Things may well get worse before they get better.”

Rarely has there been a single hour on a single day that saw such discordant messages emanating from Washington in a time of national crisis. In the middle of a transition of power that has already proved more unsettling than any in more than a century, the departing and incoming presidents on Tuesday offered the American people vastly divergent assessments of the state of their union.

The split-screen speeches beamed from the White House and the headquarters of the next administration in Wilmington, Del., could hardly have underscored the differences between the 45th and 46th presidents more starkly. Mr. Trump offered told-you-so triumphalism as he bragged about the “incredible,” “amazing” and “unprecedented” development of vaccines for the coronavirus. Mr. Biden projected feel-your-pain empathy, urged resisters to wear masks and warned that “this mess” would not end quickly.

At Mr. Trump’s event, dozens of officials and guests crowded into an auditorium, most of them wearing masks, which is a change for this White House. But they were still not socially distant. The president himself, who was hospitalized with Covid-19 in October, wore no mask as 15 members of his team gathered behind him for the signing of an executive order meant to prioritize the vaccine for Americans over people in other nations.

At Mr. Biden’s event, where he formally announced his top health care nominees and advisers, only a handful of people were present, all masked and sitting far apart. Some of those whose appointments he announced beamed in their remarks remotely. Shortly before the event, the Biden team made its regular announcement that the president-elect had once again tested negative for the virus.

The contrast comes at a perilous moment for the United States as coronavirus cases keep rising to new peaks, hospitals are overwhelmed with sick patients and the number of virus deaths is spiking. The new vaccines developed on Mr. Trump’s watch may be approved within days. But only health care workers and the most vulnerable Americans will get inoculated in the short term, and most Americans will likely not get access to lifesaving shots until spring.

The American tradition of one president at a time during the 10-week period between election and inauguration days has fallen by the wayside as Mr. Biden seeks to assert moral leadership even without the instruments of power. Mr. Trump spreads evermore outlandish claims about an invented conspiracy to steal the election and evermore desperate efforts to overturn the will of the people.

More than 53,000 people have died of the coronavirus in the United States since the Nov. 3 election, and at the current rate another 97,000 could die by Jan. 20 when Mr. Biden takes over — roughly the equivalent of every man, woman and child living in Albany, N.Y., or Dearborn, Mich., or Erie, Pa.

But Mr. Trump, who repeatedly claimed during the campaign that the pandemic was “rounding the corner,” has shown almost no interest in talking about it since then. Nor has he offered any guidance to Americans about how to protect themselves beyond trumpeting the new vaccines.

“People that aren’t necessarily big fans of Donald Trump are saying whether you like him or not, this is one of the greatest miracles in the history of modern-day medicine or any other medicine, any other age of medicine,” Mr. Trump said during his “Operation Warp Speed Vaccine Summit” on Tuesday. 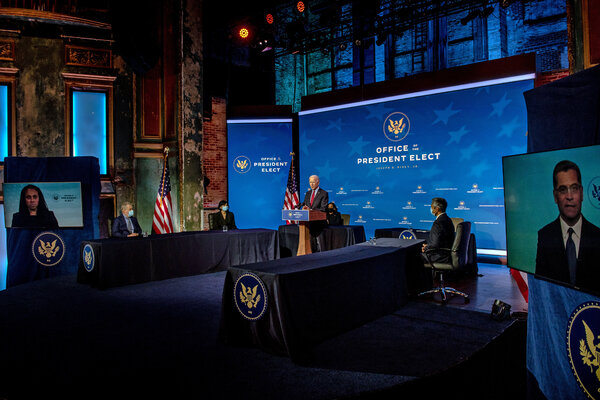 Intent on claiming credit and disproving his critics, the White House played a videotape mashing together clips of pundits and doctors — including Dr. Anthony S. Fauci, a member of Mr. Trump’s own coronavirus task force — cautioning against expecting fast action on a vaccine. The tape did not note that many experts warned that any vaccine would not be widely available until next spring, which is the timetable now envisioned, nor did it show Mr. Trump promising as far back as March that a vaccine would be available almost immediately, which it was not.

But Mr. Trump was correct that with his administration prodding Operation Warp Speed, the vaccine was developed faster than any has been produced before in medical history. It represents a major breakthrough that should change the course of the pandemic, even if not as quickly as the president has previously claimed.

“Nobody thought it was even remotely possible to do what we’ve done in a period of less than nine months,” Mr. Trump said. “And we took a lot of heat when we said this is our goal.”

The new highs he did not want to talk about were the coronavirus cases. When a reporter asked about the message to Americans as they wait for the vaccines to become available, Mr. Trump brushed it off, noting that protocols devised by public health experts “are very important guidelines” before quickly pivoting back to the vaccines. “The vaccine was our goal,” he said. “That was No. 1 because that was the way it ends.”

He likewise dismissed concerns about Christmas parties that he has been hosting in recent days at the White House with crowds far larger than public health guidelines dictate. “Well, they’re Christmas parties and frankly, we’ve reduced the number very substantially as you know,” he said. “And I see a lot of people at the parties wearing masks.”

From his own stage in Wilmington, Mr. Biden presented the situation quite differently, painting a grim picture of grief and suffering. He noted that last week the coronavirus was the No. 1 cause of death in the United States and that Black, Hispanic and Native American people were dying in far greater numbers proportionately.

Unlike Mr. Trump, who made no mention of the victims of the pandemic, Mr. Biden addressed them directly. “For families and friends left behind, there’s a gaping hole in your heart that will never be fully healed,” he said. “As a country, we’ve been living with this pandemic for so long, we’re at risk of becoming numb to its toll on all of us. You know, we’re resigned to feel that there’s nothing we can do, that we can’t trust one another, that we must accept death, pain and sorrow.”

Mr. Biden said that he would “credit everyone” involved in developing the vaccine without mentioning Mr. Trump, but said that “developing a vaccine is only one herculean task.” He also expressed concern that under the Trump administration plan, vaccinations would stall after the initial doses are administered unless Congress approves more money.

Waiting for a shot, however, is not enough, he said. He vowed to require mask wearing on federal property and on interstate planes, trains and buses while encouraging Americans in other settings to also cover their faces at least for the first 100 days of his presidency to break the back of the outbreak.

“We need your help,” he said. “Wear a mask for just 100 days. It’s the easiest thing you can do to reduce Covid cases, hospitalizations and deaths. Help yourself, your family and your community. Whatever your politics or point of view, mask up for 100 days once we take office, 100 days to make a difference. It’s not a political statement. It’s a patriotic act.”

But as he faces the prospect of taking over a country afflicted by disease, he sought to leaven his grim message with hope, promising to channel hardship into commitment for action. “Out of our collective pain,” he said, “we’re going to find collective purpose, to control the pandemic, to save lives and to heal as a nation.”