The president has continued to downplay the severity of the coronavirus and declare before largely maskless crowds that it is vanishing. The surge in new cases across the country says: Not so. 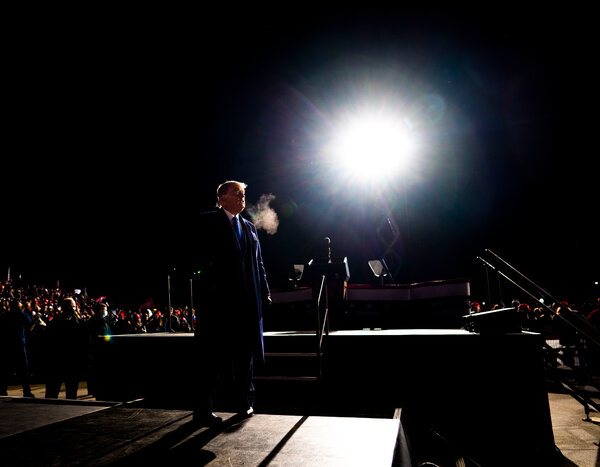 As an immense new surge in coronavirus cases sweeps the country, President Trump is closing his re-election campaign by pleading with voters to ignore the evidence of a calamity unfolding before their eyes and trust his word that the disease is already disappearing as a threat to their personal health and economic well being.

The president has continued to declare before large and largely maskless crowds that the virus is vanishing, even as case counts soar, fatalities climb, the stock market dips and a fresh outbreak grips the staff of Vice President Mike Pence. Hopping from one state to the next, he has made a personal mantra out of declaring that the country is “rounding the corner.”

Mr. Trump has attacked Democratic governors and other local officials for keeping public-health restrictions in place, denouncing them as needless restraints on the economy. And venting self-pity, the president has been describing the pandemic as a political hindrance inflicted on him by a familiar adversary.

“With the fake news, everything is Covid, Covid, Covid, Covid,” Mr. Trump complained at a rally in Omaha on Tuesday, chiding the news media and pointing to his own recovery from the illness to downplay its gravity: “I had it. Here I am, right?”

Earlier the same day, Mr. Trump ridiculed the notion that the virus was spreading rapidly again, falsely telling a crowd in Lansing, Mich., that the reported “spike in cases” was merely a reflection of increased testing. The 74-year-old president pointed to his teenage son, who was diagnosed with the virus earlier this month, to suggest that many of those cases were of only trivial concern.

“Do you ever notice, they don’t use the word ‘death,’ they use the word ‘cases’?” Mr. Trump said. “Like, Barron Trump is a case. He has sniffles, he was sniffling. One Kleenex, that’s all he needed, and he was better. But he’s a case.”

As a political matter, the president’s approach amounts to an Obi Wan-like attempt to wave his hand before the electorate and tell voters that they are not experiencing a pandemic that is tearing through their neighborhoods and filling hospitals. His determination to brush aside the ongoing crisis as a campaign issue has become the defining choice of his bid for a second term and the core of his message throughout the campaign’s endgame.

There is considerable evidence it is not working. The stock market, long the focal point of Mr. Trump’s cheerleading efforts, plunged by more than 900 points on Wednesday, suffering its worst drop in months as investors grappled with the mounting disruptions wrought by the pandemic. Polling and interviews with voters show that most are not inclined to trust Mr. Trump’s sunny forecast.

Mr. Trump’s description of the disease is ungrounded in fact, and his theory of countering it has clashed with the preferences of medical officials at every level of government. The country has reported more than 8.8 million cases of the coronavirus, including a 39 percent increase in new cases over the last 14 days. More than 227,000 Americans have perished from the disease.

In Bullhead City, Ariz., on Wednesday, Mr. Trump promised voters that a vaccine would be available “momentarily,” though scientists and pharmaceutical companies say no such breakthrough is assured. Using a phrase that has become a refrain for him at rallies, he insisted the country was “rounding the turn” on the virus.