WASHINGTON (Reuters) – President Donald Trump used a White House event on China to excoriate his expected Democratic presidential rival, Joe Biden, on Tuesday in a rambling diatribe that turned the Rose Garden setting into a substitute rally venue, minus his supporters. 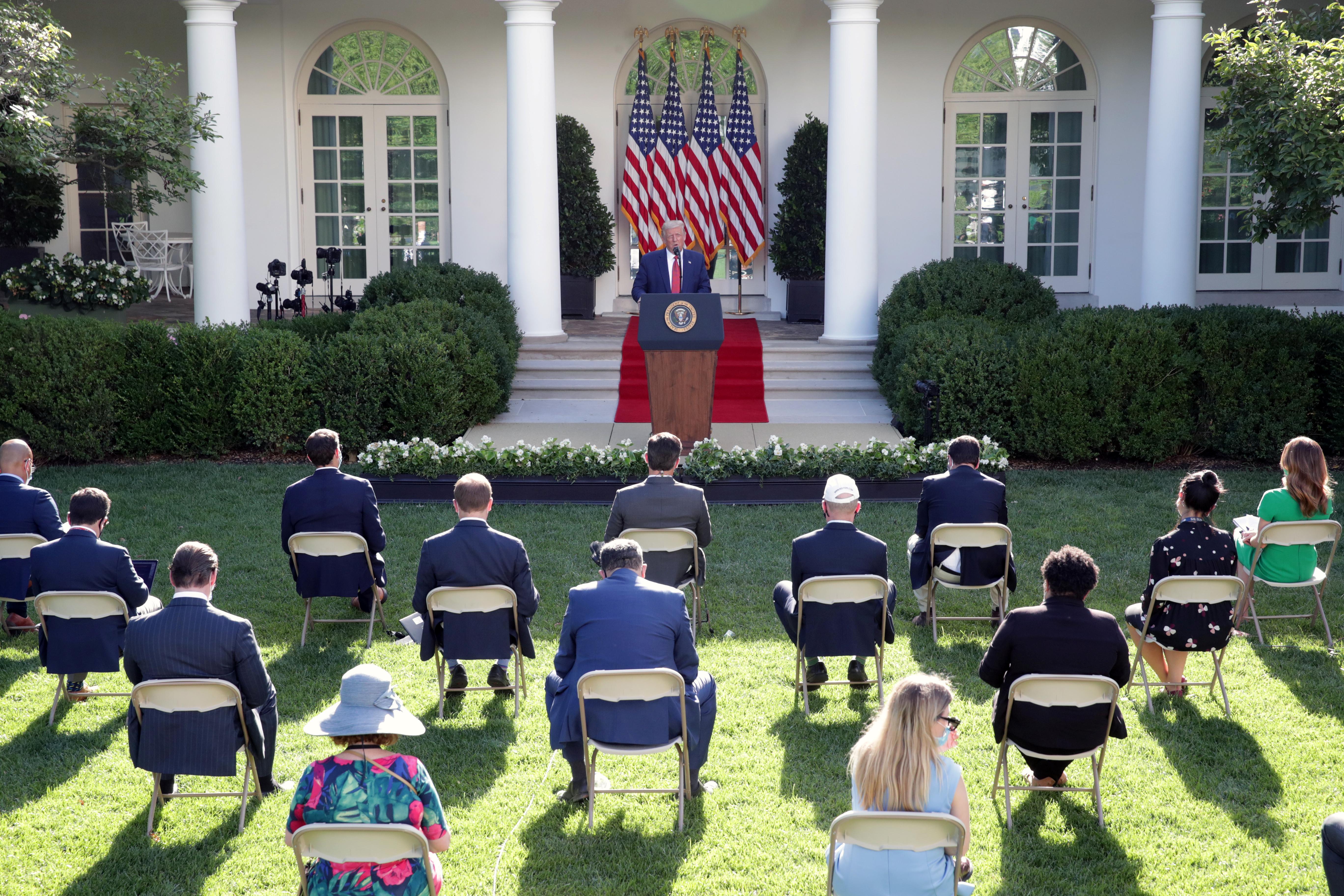 The Republican president, who trails Biden in national opinion polls, has chafed at his inability to hold large political gatherings because of the coronavirus pandemic.

His campaign postponed an outdoor rally scheduled for last Saturday in New Hampshire, citing a tropical storm off the East Coast. An indoor rally he held in Tulsa, Oklahoma, last month featured a partially empty arena.

So on a day when Biden unveiled a $2 trillion climate plan during a speech in Delaware, Trump took to a podium outside the Oval Office and, after announcing moves to punish China for its treatment of Hong Kong, criticized the former vice president and sought to draw a distinction between their two candidacies.

“Today, Joe Biden gave a speech in which he said that the core of his economic agenda is a hard-left crusade against American energy. He wants to kill American energy,” Trump said.

Biden’s plan, which would seek to cut carbon emissions from electrical power production to zero in 15 years, signified a more aggressive approach on climate policy than he adopted during the Democratic presidential nominating race in a nod to party progressives who are demanding bolder action.

Trump pulled the United States out of the Paris climate accord to fight climate change. Biden plans to bring the country back in if he is elected in November.

“Yet one more gift from Biden to the Chinese Communist Party,” Trump said. He sees the accord as favorable to Beijing.

The dueling events between the incumbent president and the man who hopes to replace him could represent a prelude to how their campaigns do events in the time of the coronavirus, scheduling more speeches with reporters present but no large crowds.

Trump took a handful of questions in his roughly hour-long event. The president made minimal reference to the coronavirus despite a surging number of cases across the country.

Biden, who spoke for some 20 minutes, took no questions.

Trump painted Biden as ineffective in a host of different policy areas during his eight years in office as President Barack Obama’s No. 2 and during decades in the U.S. Senate.

He knocked Biden’s stances on the U.S. military, immigration, welfare and China.

Using a strategy that his campaign had sought to employ before the pandemic and its economic fallout consumed the country, Trump emphasized socialism by painting Biden as tied closely to policies advocated by his former rival for the nomination, Senator Bernie Sanders.

“Last week, Joe Biden released his unity platform developed with socialist Bernie Sanders,” Trump said. “The Biden-Sanders agenda is the most extreme platform of any major-party nominee, by far, in American history.” 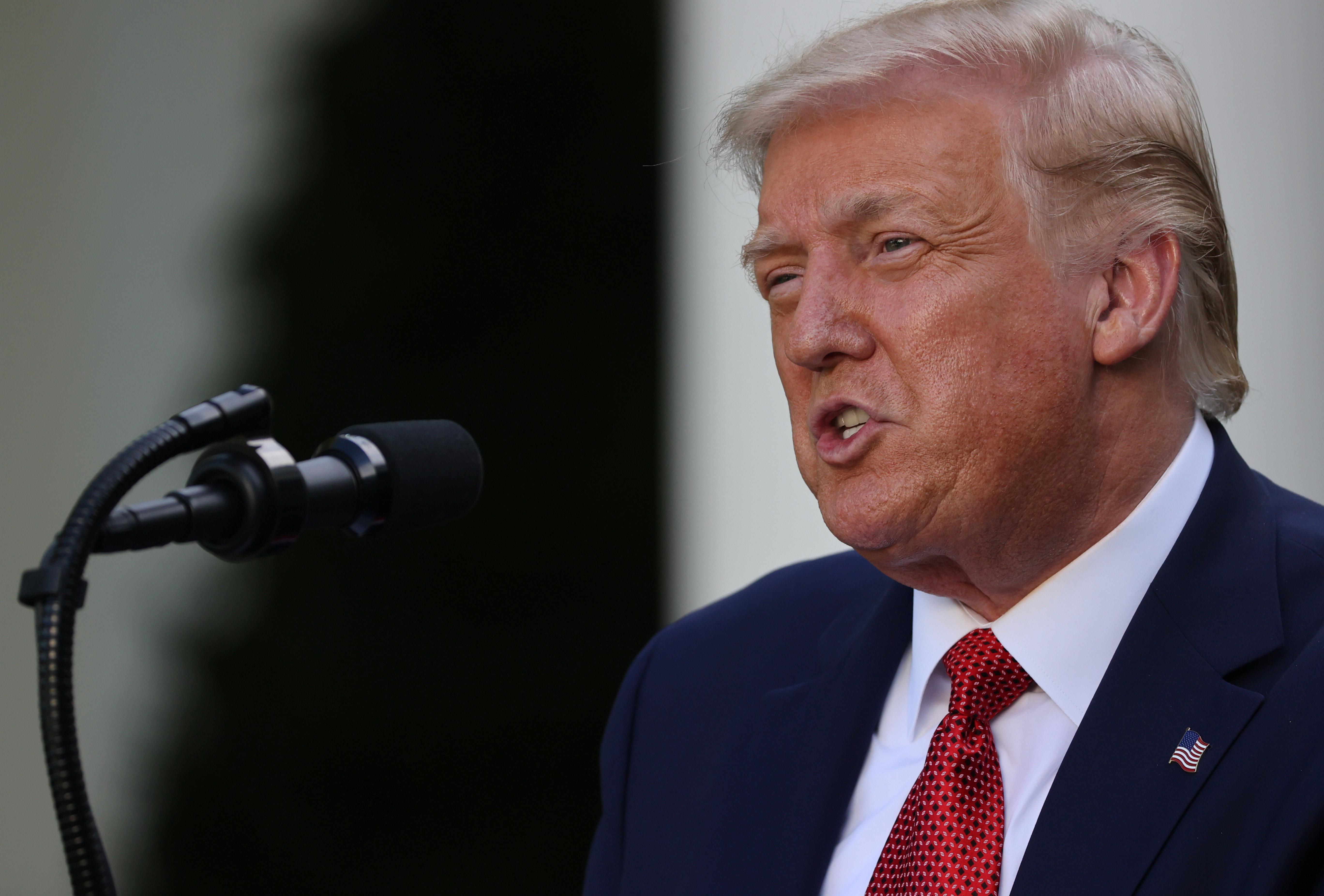 Biden needs to appeal to left-leaning supporters of Sanders, who identifies as a democratic socialist.

“Trump turned what was supposed to be a Rose Garden speech on holding China accountable into a meandering, nonsensical, and long-winded campaign rally that we only hope the American people were watching,” it said.