As President Trump’s efforts to overturn the 2020 election have steadily disintegrated, the country appears to have escaped a doomsday scenario in the campaign’s epilogue: Since Nov. 3, there have been no tanks in the streets or widespread civil unrest, no brazen intervention by the judiciary or a partisan state legislature. Joseph R. Biden Jr.’s obvious victory has withstood Mr. Trump’s peddling of conspiracy theories and his campaign of groundless lawsuits.

In the end — and the postelection standoff instigated by Mr. Trump and his party is truly nearing its end — the president’s attack on the election wheezed to an anticlimax. It was marked not by dangerous new political convulsions but by a letter from an obscure Trump-appointed bureaucrat, Emily W. Murphy of the General Services Administration, authorizing the process of formally handing over the government to Mr. Biden.

For now, the country appears to have avoided a ruinous breakdown of its electoral system.

While Mr. Trump’s mission to subvert the election has so far failed at every turn, it has nevertheless exposed deep cracks in the edifice of American democracy and opened the way for future disruption and perhaps disaster. With the most amateurish of efforts, Mr. Trump managed to freeze the passage of power for most of a month, commanding submissive indulgence from Republicans and stirring fear and frustration among Democrats as he explored a range of wild options for thwarting Mr. Biden.

He never came close to achieving his goal: Key state officials resisted his entreaties to disenfranchise huge numbers of voters, and judges all but laughed his legal team out of court.

Ben Ginsberg, the most prominent Republican election lawyer of his generation, said he doubted any future candidates would attempt to replicate Mr. Trump’s precise approach, because it has been so unsuccessful. Few candidates and election lawyers, Mr. Ginsberg suggested, would regard Rudolph W. Giuliani and Sidney Powell — the public faces of Mr. Trump’s litigation — as the authors of an ingenious new playbook.

“If in a few months, we look back and see that this Trump strategy was just an utter failure, then it’s not likely to be copied,” said Mr. Ginsberg, who represented former President George W. Bush in the 2000 election standoff. “But the system was stress-tested as never before.”

That test, he said, revealed enough vague provisions and holes in American election law to make a crisis all too plausible. He pointed in particular to the lack of uniform standards for the timely certification of elections by state authorities, and the uncertainty about whether state legislatures had the power to appoint their own electors in defiance of the popular vote. The 2020 election, he said, “should be a call for some consideration of those issues.”

Yet even without precipitating a full-blown constitutional crisis, Mr. Trump has already shattered the longstanding norm that a defeated candidate should concede quickly and gracefully and avoid contesting the results for no good reason. He and his allies also rejected the longstanding convention that the news media should declare a winner, and instead exploited the fragmentation of the media and the rise of platforms like Twitter and Facebook to encourage an alternative-reality experience for his supporters.

The next Republican candidate to lose a close election may find some voters expecting him or her to mimic Mr. Trump’s conduct, and if a Democrat were to adopt the same tactics, the G.O.P. would have no standing to complain. 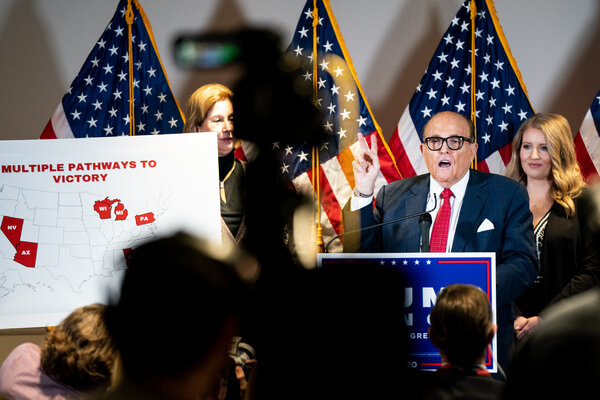 Still more important, legal and political experts said, is the way Mr. Trump identified perilous pressure points within the system. Those vulnerabilities, they said, could be manipulated to destabilizing effect by someone else, in a closer election — perhaps one that featured real evidence of tampering, or foreign interference, or an outcome that delivers a winner who was beaten handily in the popular vote but scored a razor-thin win in the Electoral College.

In those scenarios, it might not be such a long-shot gambit for a losing candidate to attempt to halt certification of results through low-profile state and county boards, or to bestir state legislators to appoint a slate of electors or to pressure political appointees in the federal government to block a presidential transition.

Indeed, Mr. Trump managed to intrude on normal election procedures in several states. He summoned Michigan Republican leaders to the Oval Office as his allies floated the idea of appointing pro-Trump electors from the state, which Mr. Biden carried by more than 150,000 votes. And he inspired an onslaught from the right against Georgia’s Republican secretary of state, Brad Raffensperger, who declined to affirm Mr. Trump’s false claims of ballot tampering. Though Mr. Raffensperger oversaw a fair election, both of Georgia’s Republican senators, channeling the president, called for his resignation.

Michael Li, senior counsel at the Brennan Center for Justice, said the country had experienced a “‘Lord of the Flies’ moment” that revealed just how willing some powerful actors were to enable an undisguised effort to sabotage a free and fair election.

“It’s easy to laugh at the Trump challenges, just because they’ve been so out there,” Mr. Li said. “But what’s scary is, you step back from that a bit and see how many people were willing to go along with it until fairly deep in the process.”

“There will be closer elections, ultimately” he added. “This one wasn’t very close. The fact that people are willing to go down dangerous paths should give us all pause.”

It remains to be seen whether Mr. Trump will wind up as a singularly sore loser or as the herald of a new Wild West era in American electioneering. There have been far closer elections this century — including the 2000 vote that plunged the country into a weekslong review of Florida’s rickety vote-counting procedures, and the 2016 election that made Mr. Trump president through a historically wide split between the popular vote and the Electoral College. But one else has entertained the corrosive tactics Mr. Trump has sought to employ.

Like numerous other presidential schemes over the last four years, Mr. Trump’s plot against the election unraveled in part because of external circumstances — the large number of swing states Mr. Biden carried, for instance — and in part because of his own clumsiness. His lawyers and political advisers never devised an actual strategy for reversing the popular vote in multiple big states, relying on a combination of televised chest-thumping and wild claims of big-city election fraud for which there was no evidence.

Barbara J. Pariente, the former chief justice of the Florida Supreme Court who oversaw the state-level battle over the 2000 vote, said it was essential for Congress to clarify the process by which elections are conducted and resolved or risk greater calamity in the coming years. Mr. Trump’s team, she said, had already breached fundamental standards of legal conduct by filing cases seeking to throw out huge numbers of votes “without any evidence of impropriety, and then asking a court to look further into it.”

“As I look at what is happening now, I think it’s a real attack on our American system of democracy, and it is causing tens of millions of Americans to doubt the outcome,” Ms. Pariente said. “It has grave implications, in my view, for the future of this country.”

Even if Congress were to impose a clearer set of election procedures, however, there is reason to doubt whether the rules could reverse the total-war mind-set Mr. Trump has modeled. In failure, he has created a road map for his own party — or even, under certain circumstances, for a grievance-laden Democrat — to wage a bitter-end fight against an unfavorable election result, with the support of loud voices in the right-wing media and much of his party’s conservative base.

And it is that last cohort, the millions of voters who remain loyal to Mr. Trump and who appear largely indifferent to the facts of the vote tally and the niceties of legal procedure, that represents the most potent kind of weapon for this defeated president, or another executive who might follow his example.

Shawn Rosenberg, a professor of political and psychological science at the University of California, Irvine, who has written pessimistically about the trajectory of American democracy, said Mr. Trump has been highly effective at exploiting the gap between the complexity of the country’s political system and the more rudimentary grasp most voters have of their government. For the average partisan, he said, issues of political norms and procedures were “very abstract” and far less important than simply winning — an impulse Mr. Trump stoked to the detriment of democratic institutions.

Mr. Rosenberg warned that while Mr. Trump’s political opposition had managed to unseat an incumbent — a rare feat in the nation’s presidential system — the election was not the kind of overwhelming rout that might have proven American democracy “invulnerable” to the kind of erosion on display in newer democracies like Poland and India. That was something of a disappointment to Mr. Trump’s critics on both the left and right, he said.

“Their hope was that he had gone so far that he would awaken this awareness and resolve in the American people,” Mr. Rosenberg said. “And clearly that was not the case for roughly 72 million of them.”