Shortly after the last U.S. troops left Afghanistan, the secretary of state outlined a plan to use diplomacy to try to extract remaining Americans and Afghan allies. 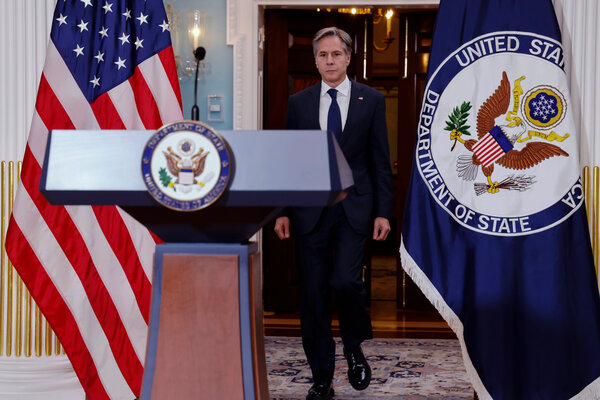 The following is a transcript of Secretary of State Antony J. Blinken’s remarks on Monday about the U.S. plan for engagement with Afghanistan after evacuations ended and the last American troops departed.

Eighteen days ago, the United States and our allies began our evacuation and relocation operation in Kabul. As you just heard from the Pentagon a few hours ago, that operation was completed. More than 123,000 people have been safely flown out of Afghanistan. That includes about 6,000 American citizens.

This has been a massive military, diplomatic and humanitarian undertaking. One of the most difficult in the nation’s history and an extraordinary feat of logistics and coordination under some of the most challenging circumstances imaginable. Many, many people made this possible.

I want to commend our outstanding diplomats who worked around the clock, and around the world, to coordinate the operation. They volunteered for duty at the Kabul airport. They flew to transit countries to help process thousands of Afghans bound for the United States. They deployed to ports of entry and American military bases to welcome Afghans to their new homes.

They staffed a 24/7 task force here in Washington, overseen by Deputy Secretary Brian McKeon. And they built a list of Americans possibly seeking to leave Afghanistan, then worked to contact every single one of them, repeatedly, making 55,000 phone calls, sending 33,000 emails since Aug. 14.

They solved problem after problem to keep the mission moving forward. They did this because for the thousands of State Department and U.S.A.I.D. employees who served in Afghanistan in the past 20 years, this evacuation operation was very personal. Many worked hand in hand for years with Afghan partners, many of whom became trusted friends. We also lost cherished members of our foreign service community in Afghanistan. We’ll never forget them.

Helping Americans, our foreign partners who have been by our side for 20 years and Afghans at risk at this critical moment was more than just a high-stakes assignment for our team. It was a sacred duty. And the world saw how our diplomats rose to the challenge with determination and heart.

U.S. service members in Kabul did heroic work securing the airport, protecting civilians of many nationalities, including tens of thousands of Afghans, and airlifting them out. They’re also providing vital support right now caring for Afghans on military bases in Europe, the Middle East and here in the United States. We’ve seen pictures of U.S. service members at the Kabul airport cradling babies, comforting families. That’s the kind of compassion and courage our men and women in uniform exemplify.

They carried out this mission under the constant threat of terrorist violence. And four days ago, 11 Marines, one Navy medic and one soldier were killed by a suicide bomber at the airport gate, as well as scores of Afghans. Nearly all of them were in their early 20s. Just babies or toddlers on Sept. 11, 2001. These deaths are a devastating loss for our country. We at the State Department feel them deeply.

We have a special bond with the Marines. The first person that you see when you visit an American embassy is a marine. They guard our diplomatic missions. They keep us safe around the world. We couldn’t do our jobs without them. And we will never forget their sacrifice, nor will we forget what they achieved. The most exceptional among us perform a lifetime’s work of service in a short time here on Earth. So it was for our exceptional brothers and sisters who died last week.