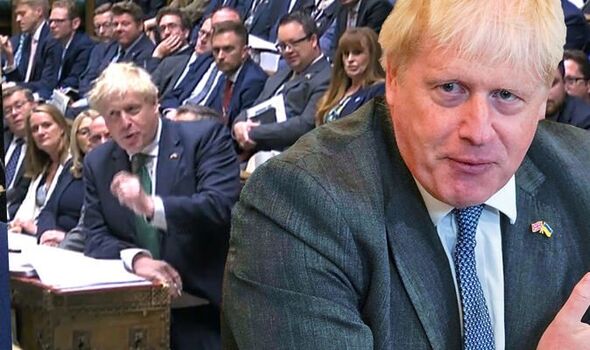 Just as the Conservative leader looked to have put last week’s confidence vote behind him, he was hit by the new heavy blow of Lord Geidt quitting.

Rebels in the party appeared to have abandoned hopes of getting rid of the Prime Minister after failing to take their opportunity to oust him from No10 last week.

At PMQs in the House of Commons yesterday, Mr Johnson was loudly cheered on by his MPs as he brushed off attacks from Sir Keir Starmer.

But Lord Geidt’s resignation, the second ethics adviser to do so under the current incumbent of No10, has firmly returned the attention to the Prime Minister’s future.

In a single-line statement published on Wednesday evening, the ethics adviser said: “With regret, I feel that it is right that I am resigning from my post as independent adviser on ministers’ interests.”

No reason was given for his shock departure and Downing Street is yet to publish the normal exchange of letters.

Seizing on Lord Geidt’s decision, William Wragg, one of Mr Johnson’s most vocal Tory critics, said: “Lord Geidt is a person of great integrity, motivated by the highest ideals of public service.

“For the PM to lose one adviser on ministers’ interests may be regarded as a misfortune.

Those in the party looking to bring about Mr Johnson’s downfall hope sustained pressure on his position will eventually force him out of office.

Influential backbencher Steve Baker even called on members of the Cabinet to now quit in wake of Lord Geidt’s decision in a bid to make Mr Johnson resign.

He told Politico: “It’s time for the great statesmen and women in the Cabinet to rise to the moment and get a grip of this situation before it degenerates any further.”

Meanwhile, Labour is set today to force the Government to give a statement in Parliament on the resignation later today.

House of Commons Speaker Sir Lindsay Hoyle will consider a request from the Opposition this morning, with a minister likely to be made to come to the Chamber to answer questions on Lord Geidt’s decision.

It means more time in Parliament will be spent debating Mr Johnson’s conduct in office, with other issues pushed back.