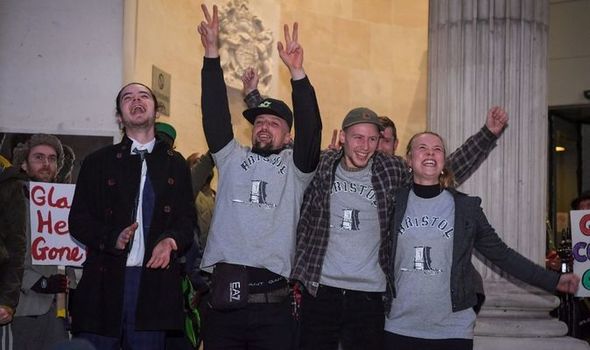 The Sunday Express has learnt that Home secretary Priti Patel and Attorney General Suella Benjamin have held talks with the influential Common Sense Group of Tory MPs chaired by former minister Sir John Hayes in the wake of not guilty verdicts for the left wing protesters who pulled down Sir Edward Colston’s statue in Bristol.

The four accused had been tried for criminal damage over the incident in June last year but the jury found them “not guilty” after the defence urged them “not to be on the wrong side of history.”

In a letter to Ms Patel, Ms Braverman and Justice Secretary Dominic Raab, 24 Tory MPs have asked for a change in the law to strengthen the powers of the Attorney General to have verdicts reviewed in the Court of Appeal.

The group suggested that changes might “strengthen the effective application of existing statutes, provide still clearer guidance for courts on directions by judges and grounds for acquittal, and take further steps to both deter and punish violent mobs of the kind that rampaged unpunished in Bristol.”

It is understood that Ms Braverman is planning on taking the case to the Court of Appeal with her existing powers.

They questioned whether the trial should have been heard by a jury and if it should have taken place outside Bristol where the crime took place.

While accepting that the jury system is “a cornerstone” of British justice, the 24 MPs and peers added: “Faith in the rule of law and trust in the jury system are essential components of effective criminal justice, which is endangered when the public witnesses, with astonishment, patently absurd, perverse verdicts of this kind.”

The group have concerns that the Colston 4 trial could “set a wider precedent” and see other “woke activists let off” even when they have broken the law.

This includes the Extinction Rebellion and Insulate Britain climate change extremists who have clogged up the transport network and prevented newspapers being distributed with protests as well as putting lives at risk by blocking ambulances with other traffic.