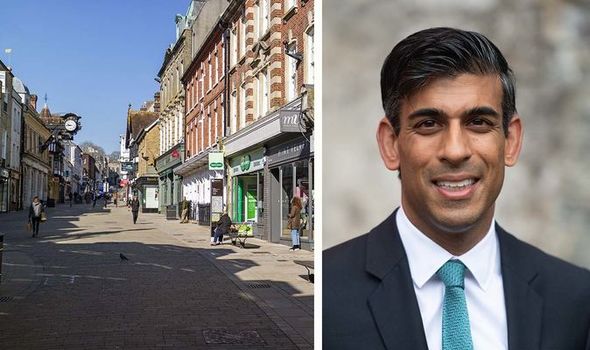 Tory MPs are demanding the Chancellor slashes the levy on shops and pubs in his Budget on October 27. And they want mammoth online retailers to help pay for it by stumping up more tax.

However, shopkeeper leaders say even 20 percent is not enough ‑ and want it closer to 50 percent in some instances.

The calls come on the eve of the Conservative party’s annual conference in Manchester. MPs say cutting bricks-and-mortar stores some slack will further boost the rebounding economy ‑ up by a record 5.5 percent ‑ with struggling communities reaping huge rewards.

Business rates typically put £30billion a year in Government coffers. A 20 percent cut will return about £6billion to retailers.

MPs warn that without the boost, many shops will go to the wall, leading to significant job losses, as highlighted by the Daily Express Save Our High Streets Crusade.

Writing for us, Tory MP Scott Benton said: “We are urging the Chancellor to urgently reduce the level of business rates, or, what we should really call it ‑ a shops tax ‑ to give those businesses with a physical presence the chance to compete against the likes of Amazon.

“We must find ways to breathe new life back into our high streets.”

Business rates are calculated on a property’s rateable value, which is linked to rental value. The rates were running at about 50 percent when the pandemic kicked in but in 1990 they were around 30 percent. The bill can also be reduced by having one or more reliefs applied, such as for empty properties or charities.

Before the Covid disaster the Government extended the retail discount relief to 50 percent, so those whose premises had a rateable value of £51,000 or less could cut their business rates in half.

And Andrew Goodacre, of the British Independent Retailers Association, said smaller shops would benefit from a return to that.

He argued: “A 20 percent reduction will leave small retailers worse off. The business model has changed. The idea of bringing business rates back at the full level in the future will simply cause many more businesses to say enough is enough, we can’t do it.”

In a bid to shelter retailers from the pandemic, Mr Sunak exempted them from paying business rates. But the tax holiday ended in June and firms must cover discounted rates until the end of April.

A report by political consultancy WPI Strategy says more than 8,700 chain stores shut on high streets, shopping malls and retail parks in the first six months of 2021. Around 90,000 retail jobs were lost in the year from March 2020.

It says the areas with the highest vacancy rates are “overwhelmingly” likely to be in constituencies most in need of “levelling up” ‑ Mr Benton’s Blackpool South plus Liverpool Walton, Middlesbrough, Bradford West and Great Grimsby. The lowest number of vacancies are in London and the South East.

The report also calls for an online sales levy to bridge the rates cut. Tory MP Kevin Hollinrake, who chairs the Property Research Group of MPs, said: “Making the business rates system fair has to be a priority. Given the state of the public finances any tax cut has to be paid for somewhere else.”

Bishop Auckland MP Dehenna Davison, who helped to demolish Labour’s Red Wall of safe seats at the last general election, said: “If businesses are to bounce back from coronavirus and town centres are able to rebuild we must look at the financial inequality presented by business rates.

“Businesses in my constituency face rates eight times higher than those in the South.”

Meanwhile the UK’s hospitality and tourism sectors have urged Mr Sunak to keep their VAT low.

Under Treasury plans, VAT for hospitality and tourism soars from five per cent to 12.5 percent today ‑ and will return to its standard 20 percent level in April.

But trade bodies, including UK Hospitality and the British Institute of Innkeeping, are calling for VAT to stick at 12.5 percent ‑ or risk derailing recovery when businesses are still in survival mode.

A Government spokesman said: “We’re currently conducting a fundamental review of business rates which will conclude in the autumn.”

Net zero. These are two words you will hear a great deal in the coming weeks, particularly from the mouths of politicians.

Yet while the climate agenda is of huge importance, we must not forget about other issues which affect our everyday lives.

Top of the list? Our dwindling local shops. Often located at the heart of our communities, they provide us with jobs for young people, a chance for older generations to see and talk to familiar faces, and much more.

Physical retail is essential to every village, town and city across the UK. That is why it is so concerning to see the number of store closures on the rise.

As more people turned to online shopping during the pandemic, the future of our bricks-and-mortar stores began to crumble.

Given the social and economic importance of physical shops, it is vital that the Government creates a fairer playing field between online and the varied businesses holding communities together. If we fail to relieve the financial pressure on our shopkeepers, we risk losing thousands of jobs and seeing more boarded-up high streets.

The Prime Minister and the Chancellor must channel as much energy into issues such as business rates as they do into solving the net-zero challenge.