The Scottish Tory leader wants the Prime Minister to ensure supporters of the Union snub a second “illegal” referendum on breaking up Britain. Mr Ross spoke out in an exclusive interview with the Daily Express ahead of this weekend’s Scottish Conservative conference. The Moray MP will use the virtual gathering to argue only his party has “the strength to challenge” Nicola Sturgeon’s party.

She is demanding a rerun of the 2014 independence poll if the SNP triumphs in elections in May.

Ruth Davidson, who leads the Tories at Holyrood, will today declare that Scotland has “passed peak Nat” amid the First Minister’s dwindling support.

Ms Davidson will also tell delegates they can again help deprive Ms Sturgeon of a majority and derail her drive for independence, as happened in 2016 under plans announced by the SNP in January, the party is intending to request a Section 30 order from the Prime Minister if it wins.

This would grant Scotland the temporary power to hold a legally binding vote on its future in the UK.

However, Mr Johnson has ruled out granting any such permission while he is in office.

The SNP’s fallback position is to bring forward a Referendum Bill at the Scottish Parliament and defend any legal challenge brought against it.

To do so, it would require either an outright majority or a separatist majority with the Scottish Greens. 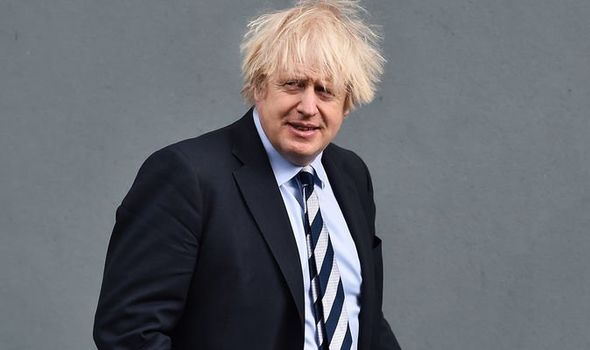 Mr Ross has made clear his party would not take part in an “illegal” poll if SNP ministers forced one and urged Labour and the Lib Dems to snub it too.

But asked if the UK Government should boycott a rogue referendum he said: “They should absolutely boycott it.

“The Scottish Conservatives would. I give no time or credence to a wildcat, illegal referendum that will only divert resources and manpower away from the crucial job that Scotland faces in the next five years which is recovery post Covid and rebuilding our country.

“That’s where our focus should be, yet the SNP are threatening to have a wildcat referendum which will be divisive, will split families and communities and I will take no part in it and neither will the Scottish Conservatives.

His remarks come just days after Scottish Secretary Alister Jack confirmed any referendum held without Westminster’s permission will be challenged in court. 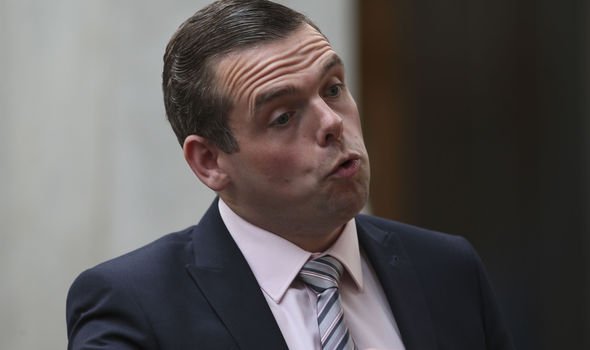 Latest surveys suggest support for the Nationalists is falling with the Tories in second place on 23 percent on the constituency vote and 24 percent on the regional vote.

Hitting out at 14 years of SNP failure Mr Ross said: “They have absolutely underperformed and they have dragged down our political system and the services that people rely on day in and day out.

“They have been focused on picking fights with Westminster, on driving forward their party ambition to separate Scotland rather than the public’s ambition to improve the services that we rely on.”

He added: “We are the only party with the strength to challenge them.

“People can see us holding Nicola Sturgeon and her government to account and how we are the party that can take the party to the SNP over the next nine weeks.

“The list vote is crucial and any split on the party list vote only helps the Nationalists.”

In her conference speech today Ms Davidson is expected to take aim at “sleaze” claims engulfing Ms Sturgeon party in the wake of the Alex Salmond affair. 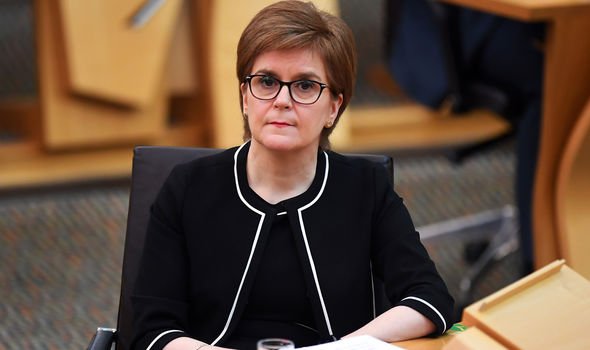 She will say: “Over the last few weeks, something in Scotland has changed.

“An SNP majority government – once seen as a nailed-on near-certainty, and for so long the outcome almost universally forecast amongst the pundits – now looks much less sure.

“It’s vital that majority is stopped because it’s the only way to be certain that Scotland isn’t dragged back into another independence referendum when we all need to be focusing on building a recovery from the pandemic.”

An SNP spokeswoman said: “Ruth Davidson has been using that same punch-line for years, hoping it turns out to be true and then realising it isn’t when the people of Scotland have given their answer in election after election.

“If it was true, perhaps Baroness Davidson wouldn’t be running off to the House of Lords to avoid democratic scrutiny.”