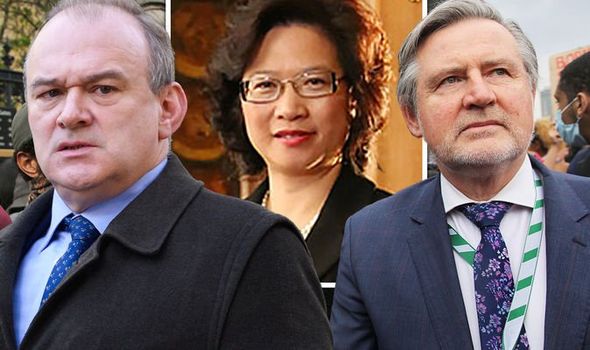 The revelation comes after Parliament was rocked last week when MI5 accused a Chinese lawyer of trying to gain influence on behalf of Beijing by funding MPs.

Members of the secretive Intelligence and Security Committee (ISC), a cross party group which reports directly to the Prime Minister, held four hour-long meetings on Thursday, which focussed on the role of so-called “influencers”, the Sunday Express has learned.

“The problem of Chinese espionage is huge as this week showed,” the committee source said. “The further we go into it the more we find.

The committee, chaired by Dr Julian Lewis, is already holding an inquiry into Chinese espionage in the UK, with special attention being devoted to the infiltration of universities.

“We brought in two new laws to limit it with business but we also need something similar for universities, research and the political sphere,” said the source.

“It is at its worst in higher education, essentially through gaining influence with the funding of universities like Oxford and Cambridge and many others.

“It is all about trying to get control of research and particularly intellectual property.”

Last night Bob Seely MP, a member of the Inter-Parliamentary Alliance on China, said: “We desperately need a foreign lobbying act, like the one the US brought in in 1938.

“This has to be done in parallel with the introduction of a new Espionage Act to replace current legislation which, frankly, is no longer fit for purpose. “

The reason for MI5’s unusually public alert over Lee is that, under current legislation, she has broken no laws and cannot be arrested.

But Clive Hamilton said the UK must go further, and introduce a more robust Australia-style Espionage and Foreign Interference Act.

“Britain needs to go well beyond US lobby law. It needs a foreign interference law modelled on Australia’s, designed to tackle exactly the kind of activity that Christine Lee has been engaging in,’ he said from his home in Canberra.

“In Australia, she would be prosecuted for the activities she has been practising and, if convicted, would face up to ten years in jail.”

The fact that Beijing expressed its outrage at the new law when it was introduced in 2018 shows that it is highly effective, said Hamilton.

“It has had a chilling effect on sovereign interference. My observation is that CCP influence in Australia became much more circumspect in how they have carried out their interference businesses here,” said Hamilton, Professor of Public Ethics at Charles Sturt University in Canberra.

“It made it substantially more difficult for Chinese actors in Australia to operate. “

Hamilton and co-author Mareike Ohlberg named Lee as a risk last year in their book, ‘Hidden Hand: Exposing How the Chinese Communist Party is Reshaping the World’, and warned of the pervasive reach of operatives working for China’s United Front Work Department.

Reporting directly to the Central Committee of the CCP, the UFWD targets key individuals in foreign countries to gather information and influence policy.

China has been steadily building up its cadre of influence since 2000. Though it is difficult to obtain up-to-date figures, more than 11,000 young overseas Chinese participated in training camps to learn how to identify targets abroad in 2006.

“When you start to understand the role of UFWP, you see there’s something sinister going on,“ he said.

“Most of the talk concerning Lee has focussed on her political influence, but UFWP also targets business and academic elites.

“There are a number of cases in Britain where senior people have been drawn into business relationships which set up obligations to those linked to the CCP; there have been honey traps set resulting in blackmail.

“A few stories have already come out, but it’s just the tip of the iceberg.

“There’s a lot more to yet come out, particularly regarding academia, from direct money links to universities cultivating academics to funding professorships to funding chairs.”
Academics hold a special value for Beijing, he said.

“The CCP sees ideas as the source of power, and therefore those who generate and propagate ideas are key targets,” he said.

“They put a great deal of effort in trying to silence intellectuals who are critical, and cultivate links with those academics who are or could be sympathetic to China’s cause. “

He added: “Christine Lee has been described as a spy. This isn’t accurate in the Cold War sense – though the UFWD wing of the CCP does often work with the Ministry of State Security, which is engaged in spying activities.

“But she is one of the most important influence agents working for the CCP in Britain. It is gratifying to see that MI5 has, albeit somewhat belatedly, taken some measures to address this.”

This shouldn’t come as a surprise, says MATTHEW HENDERSON

No surprises there surely, since the CCP has deployed similar assets throughout British institutions for decades.

They now can exert influence on local and central government, academia, industry, business and financial and legal circles throughout the country.

Lured by Chinese cash, entire UK universities have fallen under this pervasive influence, while senior members of the British establishment have been recruited as advocates for the likes of Huawei.

To most UK-China watchers, the only novelty in Ms Lee’s case is that something is being done about it.

One can only hope that similar publicity will expose more of her cohort who promote the agenda of a hostile power.

This episode highlights a problem that is barely acknowledged, largely because so many leading British individuals and institutions have preferred to keep it quiet. For all its talk of “win-win”, the CCP seeks to undermine the rules-based international order and impose its totalitarian authority worldwide.

It wages so-called “unrestricted warfare” against its international rivals, linking military, espionage, political, economic and influence policies into a single subversive narrative in which Ms Lee played a minor part. Generations of UK decision-makers have chosen to ignore this reality, justifying varying degrees of collusion with an existential rival on the spurious premise that it isn’t one.

Brutality in Hong Kong, Xinjiang, Inner Mongolia,Tibet and on the Indian border; lies about theWuhan disaster and manipulation of theWorld Health Organisation; military aggression in the South and East China Seas and around Japan andTaiwan… the list of abuses grows daily.

But despite so much evidence of malign intent, greedy illusions still prevail.

Britain need not in fact depend on China for anything. Working closely with allies and partners, the British Government must act to counter CCP threats that challenge the entire free world.