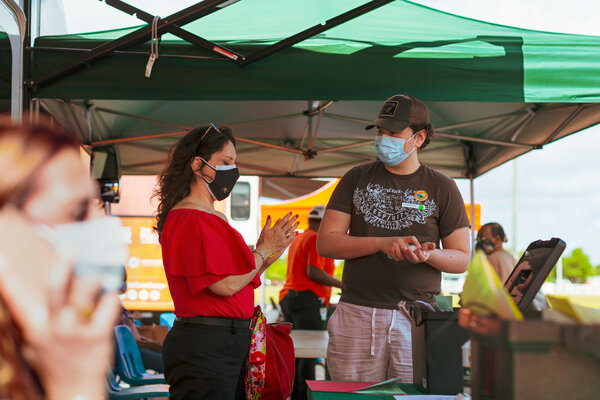 The White House on Tuesday publicly acknowledged that President Biden does not expect to meet his goal of having 70 percent of adults at least partially vaccinated by July 4 and will reach that milestone only for those aged 27 and older.

It would be the first time that Mr. Biden has failed to meet a vaccination goal he has set. If the rate of adult vaccinations continues on the current seven-day average, the country will come in just shy of Mr. Biden’s target, with about 67 percent of adults partly vaccinated by July 4, according to a New York Times analysis.

White House officials have argued that falling short by a few percentage points is not significant, given all the progress the nation has made against Covid-19. “We have built an unparalleled, first of its kind nationwide vaccination program,” Jeff Zients, the White House pandemic response coordinator, said at a new briefing. “This is a remarkable achievement.”

In announcing the goal on May 4, Mr. Biden made a personal plea to the unvaccinated, saying getting a shot was a “life and death” choice. According to the latest figures from the Centers for Disease Control and Prevention, 150 million Americans have been fully vaccinated and 177 million have received at least one dose.

But health experts warn that the falloff in the vaccination rate could mean renewed coronavirus outbreaks this winter when cold weather drives people indoors, with high daily death rates in areas where comparatively few people have protected themselves with shots.

“I give credit to the Biden administration for putting in place a mass vaccination program for adults that did not exist,” said Dr. Paul Offit, the director of the Vaccine Education Center at Children’s Hospital of Philadelphia. “But now we’ve hit a wall.”

Unless tens of millions more Americans get vaccinated in the next few months, he said, “I think, come winter, we are going to again see a surge. And that surge is going to occur exactly where you would expect it to occur — in areas that are unvaccinated or under-vaccinated.”

Young adults aged 18 to 26 have so far proven particularly hard to persuade. “The reality is many younger Americans that felt like Covid-19 is not something that impacts them, and they’ve been less eager to get the shot,” Mr. Zients said.

He said it would take “a few extra weeks” to reach more of that group to achieve the goal of 70 percent of adults at least partially vaccinated.