When Justice Ruth Bader Ginsburg joined President Barack Obama for lunch in his private dining room in July 2013, the White House sought to keep the event quiet — the meeting called for discretion.

Mr. Obama had asked his White House counsel, Kathryn Ruemmler, to set up the lunch so he could build a closer rapport with the justice, according to two people briefed on the conversation. Treading cautiously, he did not directly bring up the subject of retirement to Justice Ginsburg, at 80 the Supreme Court’s oldest member and a two-time cancer patient.

He did, however, raise the looming 2014 midterm elections and how Democrats might lose control of the Senate. Implicit in that conversation was the concern motivating his lunch invitation — the possibility that if the Senate flipped, he would lose a chance to appoint a younger, liberal judge who could hold on to the seat for decades.

But the effort did not work, just as an earlier attempt by Senator Patrick Leahy, the Vermont Democrat who was then Judiciary Committee chairman, had failed. Justice Ginsburg left Mr. Obama with the clear impression that she was committed to continuing her work on the court, according to those briefed.

In an interview a year later, Justice Ginsburg deflected questions about the purpose of the lunch. Pressed on what Mr. Obama might think about her potential retirement, she said only, “I think he would agree with me that it’s a question for my own good judgment.”

With Justice Ginsburg’s death last week, Democrats are in a major political battle, as Republicans race to fill her seat and cement the court’s conservative tilt.

Mr. Obama clearly felt compelled to try to avoid just such a scenario, but the art of maneuvering justices off the court is politically delicate and psychologically complicated. They have lifetime appointments and enjoy tremendous power and status, which can be difficult to give up.

Still, presidents throughout American history have strategized to influence the timing of justices’ exits to suit various White House priorities. 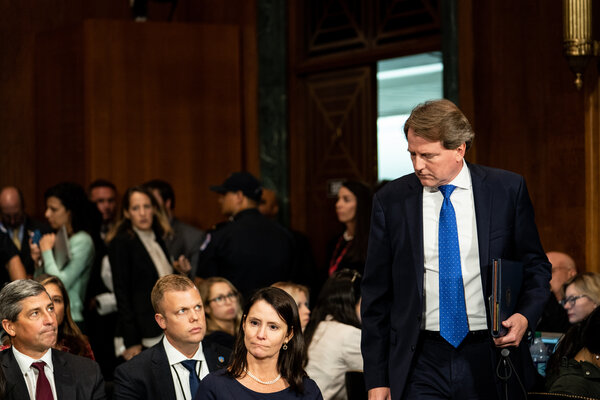 President Trump’s first White House counsel, Donald McGahn II, the primary architect of the administration’s success in reshaping the judiciary, helped ease the way for Justice Anthony Kennedy’s retirement in 2018, which allowed Mr. Trump and a Republican-controlled Senate to lock down his seat for another generation.

Mr. McGahn sought to make the justice comfortable with the process by which a successor would be chosen, according to people briefed on their conversations, by seeking his advice on potential picks for lower-court vacancies and recommending that Mr. Trump nominate one of his former clerks, Neil Gorsuch, to fill an earlier vacancy. (Brett Kavanaugh, whom Mr. McGahn recommended to fill Justice Kennedy’s seat, was also one of his clerks.)

Justices, however, often bristle at any impingement of politics or other pressures in their realm. Robert Bauer, who served as Mr. Obama’s White House counsel for part of his first term, said he recalled no discussions then of having Mr. Obama try to nudge Justice Ginsburg to step aside. Mr. Bauer said asking a judge — any judge — to retire was hypersensitive, recalling how in 2005 he wrote an opinion column calling for Congress to impose judicial term limits and require cameras in the courtroom, only to have Justice Sandra Day O’Connor blast his column in a speech on threats to judicial independence.

“The O’Connor episode reflects the sensitivity that justices can exhibit toward pressure from the outside about how the Court runs,” Mr. Bauer said, including showing “resistance to any questions about how long they serve.” He added: “White Houses are typically mindful of all this.”

Resistance aside, Democrats outside the White House also strategized about how to raise the topic of retirement with Justice Ginsburg. Several senior White House staff members say they heard word that Senator Leahy had gingerly approached the subject with her several years before the Obama lunch.

He was then the chairman of the Senate Judiciary Committee, which oversees Supreme Court nominations; he also had a warm relationship with Justice Ginsburg, a bond forged over their shared enjoyment of opera and visits to the Kennedy Center. Asked through a spokesman for comment, Mr. Leahy did not respond.

One of the former Obama administration staff members who heard discussion of the roundabout outreach by Mr. Leahy was Rob Nabors, who served in a series of White House policy and legislative affairs positions under Mr. Obama from 2009 to 2014. But Mr. Nabors said he recalled hearing that “it wasn’t clear that the message was entirely transmitted effectively, or that it was received in the manner it was delivered.”

While Mr. Obama’s own talk with the justice was tactful, changing conditions should have made his implicit agenda clear, according to the two people briefed about the meeting, who spoke only on condition of anonymity given the sensitivity of the topic. Democrats were worried about the prospect of losing the Senate. And the president had invited no other justices to lunch.

But the failure of that conversation convinced the Obama team that it was pointless to try to talk to her of departure. The next summer, when another Supreme Court term closed without a retirement announcement from her, the administration did not try again.

Neil Eggleston, who became White House counsel in April 2014, said that he did not remember anyone proposing that another attempt to ease Justice Ginsburg toward resignation would do any good.

“I think it is largely not done,” he said. “Suggesting that to a Supreme Court justice — she is as smart as anyone; she doesn’t need the president to tell her how old she is and what her timelines are.”

Given his previous tenure as chief counsel to the Judiciary Committee, Justice Stephen Breyer might have been a more pragmatic target of overtures. Walter Dellinger, a former solicitor general, mentioned to the White House counsel’s office during the Obama administration a plan he conceived to motivate Justice Breyer, a known Francophile, to start a next chapter.

“My suggestion was that the president have Breyer to lunch and say to him, ‘I believe historians will someday say the three greatest American ambassadors to France were Benjamin Franklin, Thomas Jefferson and Stephen G. Breyer,’” recalled Mr. Dellinger, who recently joined Vice President Joseph R. Biden Jr.’s campaign team.

Although it is not clear how, word of Mr. Dellinger’s idea made its way to Justice Breyer.

Mr. Dellinger said that when he ran into Justice Breyer at a holiday party not long after Mr. Trump was elected, the justice pulled him aside. “So Walter,” he asked, “do you still want to ship me off to France?” Mr. Dellinger, who sensed the justice was ribbing him, responded, “Mr. Justice, I hear Paris isn’t what it used to be.”

Mr. Dellinger added that he now thought Justice Breyer was correct to resist the idea, saying “he has made a tremendous contribution in the ensuing years.” Justice Breyer’s office declined to comment.

In making that suggestion to lure Justice Breyer with an ambassador position, Mr. Dellinger was harking back to similar ideas from Lyndon B. Johnson, a master strategist. Mr. Johnson lured Justice Arthur Goldberg, whom he wanted to replace with his friend, Abe Fortas, off the court by offering him the role of ambassador to the United Nations, saying that he would have tremendous power in negotiating the end of the Vietnam War.

Justice Goldberg never did have that authority and regretted his decision. “I asked Goldberg, why did you leave the bench?” said Laura Kalman, professor of history at the University of California at Santa Barbara. He answered her in one word: “Vanity.”

President Johnson also played on the paternal pride of the Supreme Court Justice Tom C. Clark, by appointing his son, Ramsey Clark, attorney general in March 1967. Johnson, who wanted to replace Justice Clark with Thurgood Marshall, played up the notion that his continued presence on the court while his son ran the Justice Department created a conflict of interest, and Justice Clark stepped down that June.

But presidents cannot force justices to leave the court. Franklin Roosevelt floated a plan to “pack” the court by expanding the number of justices in frustration because aging conservatives kept striking down his “New Deal” programs. President William Taft could not push out Justice Melville Fuller, whom he deemed senile after the justice bungled Taft’s swearing-in, the biographer David Atkinson wrote; Taft had to wait until Fuller died of a heart attack a year later. (In a book about Taft, Henry Pringle wrote “the old men of the court seldom died and never retired.”)

Democratic leaders had precious few cards they could have played as they contemplated their options with Justice Ginsburg. She made it clear in several interviews that she had no intention to retire; widowed in 2010, she was devoted to her work, determined to have a voice and appreciated the platform her celebrity offered her as an icon liberals liked to call the “Notorious R.B.G.”

She was clearly annoyed at any public suggestions that she step down. In 2014, Erwin Chemerinsky, dean of the law school at the University of California at Berkeley, wrote articles, appearing in The Los Angeles Times and Politico, declaring that for the long-term good of progressive values, Justice Ginsburg should step aside to make way for a younger Obama appointee.

“It was certainly conveyed to me that she was not pleased with those who were suggesting that she retire,” Mr. Chemerinsky said.

Randall Kennedy, a professor at Harvard Law School, had also written a column in 2011 in The New Republic calling for Justices Ginsburg and Breyer to step down immediately, suggesting that they should not stay on the court so long that they risked conservatives inheriting their seats.

“I didn’t feel at all apologetic about saying something which frankly seemed to me quite clear,” Mr. Kennedy said. “I’ve been praying — praying — that I’d be able to look back and say I was wrong. It didn’t turn out that way.”