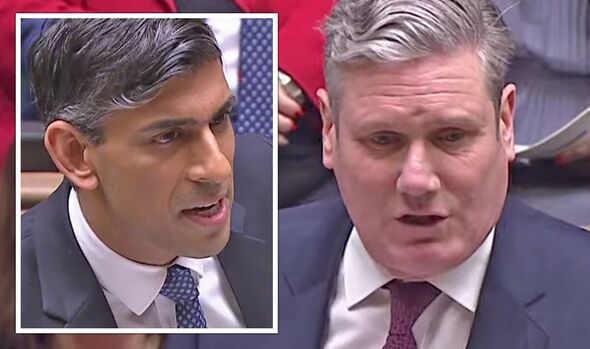 Rishi Sunak has attacked Labour’s plans for healthcare in the UK in a fiery Prime Minister’s Questions exchange with Sir Keir Starmer.

The Labour leader criticised the Tories over NHS waiting times, claiming that the Tory Government could not blame Covid for the problem.

The Prime Minister said Labour’s plans will “cost a fortune and are out of date, just like the Labour Party.”

Taking aim at the opposition, Mr Sunak said: Let’s just start with the facts, the honourable gentleman seems to completely ignore the fact that, not just in England, but in Scotland, and in Wales, and in many other European countries, Covid has had an extraordinary impact.

“We have a very clear plan to bring the waiting lists down, and it’s one that the NHS supports. I will tell you what the NHS doesn’t need. It doesn’t need Labour’s only idea for another completely disruptive, unfunded reorganisation buying out every single GP contract.

“These aren’t my words. The CEO of the Nuffield Trust said this will cost a fortune and it is out of date. Just like the Labour Party.”

Mr Sunak’s comments come after that Labour’s Health Secretary Wes Streeting said wants to “tear up” the “murky, opaque” and is considering abolishing the GP partnership if Labour win power.

But this plan has been met with resistance from some in the British Medical Association (BMA).

He said: “He can’t tell us how much they are reducing waiting times by, or when. So much for the accountability that he wants.

“As ever with this Prime Minister, you scratch the surface and find there is nothing there.

“Last month, 1.4million people waited more than four weeks for a GP appointment. When Labour left government you were guaranteed an appointment in two days. When can the Prime Minister expect to get back to that?”