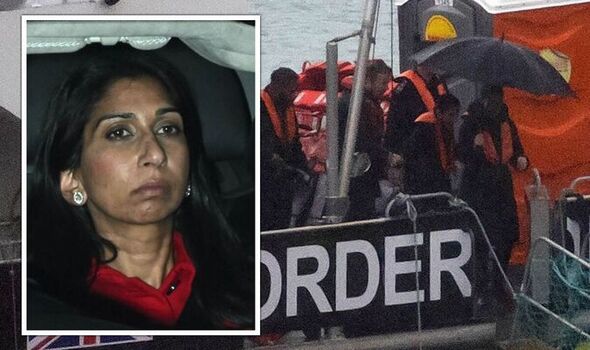 The Home Secretary has ordered more medical care, bedding and ­cooking facilities at Manston asylum processing centre. On Thursday she flew over the Channel in a military helicopter to see the length of the coastline that Border Force and the Royal Navy are protecting.

The Home Secretary arrived at Manston near Ramsgate in a Chinook helicopter, having earlier visited Dover to view the Western Jet Foil immigration facility and meet the Coastguard.

Prime Minister Rishi Sunak is now being briefed on the situation at Manston amid claims of violence, ­disease and fury over the appalling conditions.

Number 10 confirmed numbers at Manston are finally ­beginning to fall after swelling from a capacity of 1,600 to 4,000.

Over 1,000 people have been moved off-site within the last five days – as campaigners threaten the Home Office with legal action.

Downing Street said the Government is trying to find alternative accommodation – with officials understood to be looking for sites for Greek-style processing centres which impose routine checks on migrants’ movements and have curfews.

Ms Braverman said: “To break the business model of the people ­smugglers, we need to ensure the ­illegal migration route across the Channel is rendered unviable.”

Government minister Graham Stuart conceded the site was not ­operating legally and “none of us are comfortable with it”, while he also acknowledged there had been “unfortunate language” used to describe the crisis following the condemnation of Ms Braverman’s comments.

But he sought to blame an ­“unacceptable surge” in small boat crossings for the problem, adding the “system is struggling to cope”.

The grim conditions at Manston were laid bare in a letter thrown by a young girl over the perimeter fence, claiming there were pregnant women and sick detainees there.

The note, written in broken English and addressed to “journalists, ­organisations, everyone”, appeared to suggest 50 families had been held there for more than 30 days.

A No 10 spokeswoman said that more than 1,000 have been relocated to alternative accommodation since Sunday. Dover MP Natalie Elphicke fears local people could be booted out by greedy landlords hoping to cash in on lucrative Home Office contracts.

She referenced a mother with seven children who was “required to leave her privately-rented property on no notice”, and was offered accommodation in Leeds, only to end up living with her mother in a two-bed house.

She said: “Her grandmother told me how upset she was that migrants were housed in four-star hotels while her granddaughter and great-grandchildren face these impossible choices.

“Too often such concerns can be labelled as extreme or even racist.

“There is nothing extreme about being concerned about your family.”