A new campaign appears to be spreading falsehoods about the potential for forced inoculations against Covid-19. 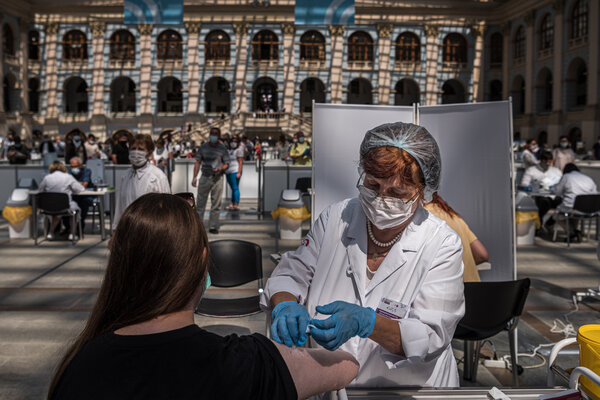 The cartoon posted on the far-right discussion forum showed police officers wearing Biden-Harris campaign logos on bulletproof vests and battering down a door with a large syringe. A caption read in part, “In Biden’s America.”

The cartoon appears to be an example of the latest effort in Russian-aligned disinformation: a campaign that taps into skepticism and fears of coronavirus vaccination to not just undermine the effort to immunize people but also try to falsely link the Biden-Harris administration to the idea of forced inoculations. The image was one of several spotted by Graphika, a company tracking disinformation campaigns.

Both Russia and China have worked to promote their own vaccines through messaging that undermines American and European vaccination programs, according to the State Department’s Global Engagement Center. But in addition to overt messaging promoting their own vaccines, Moscow has also spread conspiracy theories. Last year, the department began warning about how Russia was using fringe websites to promote doubts around vaccinations.

It is difficult to quantify the amount of disinformation being produced at any time by the Russians or other adversarial powers, government officials and outside experts said. But the rise of the Delta variant of the coronavirus — and shifting scientific advice on how to defend against a more infectious strain and the need for booster shots or masks — has created an atmosphere for misinformation to more easily spread, experts said.

“Disinformation thrives in an information vacuum,” said Lisa Kaplan, the chief executive of the Alethea Group, which helps corporations guard against misinformation. “That is when disinformation can really take hold. And knowing how the Russians typically play those situations, it wouldn’t surprise me they are trying to take advantage of it.”

The aim of various Russian groups continues to be to exacerbate tensions in western societies, a key foreign policy goal of Moscow, according to American officials briefed on the disinformation efforts.

The Russian and Chinese disinformation has tried to magnify the potential side effects of the Pfizer and Moderna vaccines, suggesting that the mRNA technology they are based on is untested or risky, State Department officials said this week.