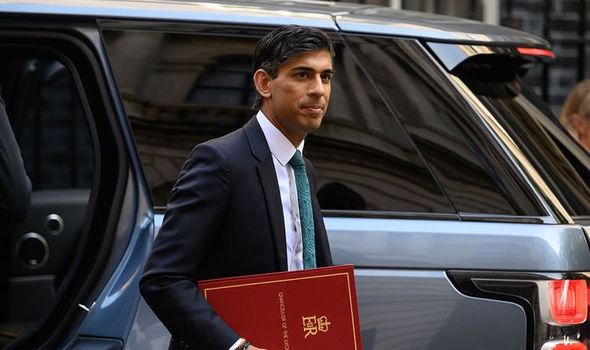 The Chancellor said gloomy predictions of four million unemployed had been sent packing by his £40billion Plan For Jobs. He added: “It’s absolutely fantastic to see our economy bouncing back.”

Two million jobs had been protected and the UK is tipped to be the joint-fastest economy, alongside the US.

Mr Sunak said nearly two million fewer people than predicted are expected to lose their jobs as the furlough scheme winds up at the end of this month.

He said: “It’s absolutely fantastic to see our economy bouncing back, with life returning to our high streets and the number of people on furlough at their lowest level since the start of the pandemic.

“It’s great to see tens of thousands of young people coming off the scheme, supporting their careers as the UK gets back to business.

“These figures are another concrete example of how our £40billion Plan For Jobs is working, something that makes me immensely proud.

“Nearly two million fewer people are now expected to be out of work than was previously feared, GDP is recovering, unemployment is falling, redundancies are at their lowest level for a year and job vacancies are growing.”

The Chancellor spoke to the Daily Express after Treasury figures showed 340,000 people came off the furlough scheme in July.

There were 1.6 million being helped on July 31 but that was down from nearly two million a month earlier ‑ and is massively fewer than the nine million supported at the height of the crisis.

Since the scheme was launched 18 months ago nearly 12 million jobs have been helped.

But Mr Sunak said ending furlough and focusing on the jobs of the future is the correct path.

He said: “Furlough was the right thing to do to protect almost 12 million jobs when Covid was at its peak but now restrictions have eased, people are returning to work and the scheme is naturally winding down.

“It’s therefore right we bring it to an end and enter the next phase of our plan, focusing on giving people the skills and opportunities they need to succeed in the jobs of tomorrow through schemes including Kickstart, Restart and apprenticeships.”

Some economists had last year warned of unemployment more than doubling as the Government shut down the economy in the lockdowns.

The jobless total stands at 1.6 million with the successful Covid job retention scheme stopping many more workers losing their roles.

Julian Jessop, economics Fellow at the Institute of Economic Affairs said: “The UK economy has recovered more quickly than almost anyone had expected. Covid restrictions have mostly gone, leaving households free to spend again, and allowing more people to return to their normal place of work.”

A significant drop in young people on furlough, with 121,600 under-35s coming off the scheme, was recorded in June and July. The over-65s are now most likely to be on furlough, with eight percent of those eligible still paid through it.

Car dealer Lookers is the latest firm pledging to repay its furlough support, of £4.1million, after posting record underlying pre-tax profits of £50.3million for the six months to June 30.

Furlough was set up to help protect people who could not work from home and covered up to 80 percent of salary.

Numbers fell after the first lockdown was lifted until the third lockdown last November.

Figures peaked at just more than five million in January and dropped again as restrictions eased.

July was the first month that employers had to find 10 percent of the pay of furloughed staff, giving firms an incentive to bring workers back or end their employment.

Lockdown rules were lifted in England on July 19, making it easier for businesses hit by social distancing to reopen.

Other positive signs of the economy springing back emerged yesterday ‑ Insolvency Service figures showed fewer potential redundancies were notified in August than in any other month in 2020/21.

Some sectors are still struggling with high levels of furlough, such as travel. Around half of airline and airport staff and 46 percent of those at travel agencies and tour operators are still being helped.

Bosses hope ministers will ditch traffic light travel rules next month to help. But all areas of the economy saw some drop in furlough from June 30 to July 31.

Apart from London, the highest rates were at Crawley, West Sussex and Slough, Berks where many locals work at Gatwick and Heathrow and airports respectively.

Economists said jobs still being protected are the hardest to restart. Charlie McCurdy, of the Resolution Foundation think-tank, said some sectors – particularly overseas tourism – were struggling to recapture pre-Covid activity.

“Up to a million employees could still be on furlough when the scheme closes. While we expect most of these staff to return to their previous roles, a significant number will not.”

Gary Smith, general secretary of the GMB union, called for help for harder-hit areas such as aviation which are still facing Covid restrictions.

He said: “The cost of supporting them in the short term is much less than the long-term costs of unemployment.”

Furlough has done its job. It’s time to say goodbye.

Back in the darkest days of the pandemic, the Government’s furlough scheme protected millions of jobs by paying up to 80 percent of the wages of people who were unable to work.

However, times have changed.

The UK economy has recovered more quickly than almost anyone had expected. Covid restrictions have mostly gone, leaving households free to spend again and allowing more people to return to their normal place of work.

This good news has been reflected in a sharp fall in the numbers on furlough, from a peak of nearly 9 million in May 2020 to about 1.6 million at the end of July this year.

Most of these are now also only on partial furlough, meaning they are doing at least some paid work.

Of course, 1.6 million is still a lot of people, so it makes sense that some have called for furlough to be extended beyond October, when it is due to end completely. But that would be a mistake, because the challenges facing the economy are now very different.

Companies are hiring again with great gusto, but are finding it increasingly hard to fill a soaring number of vacancies.

There are many reasons for this, including a mismatch of skills as various sectors reboot at different speeds.

Some workers are also reluctant to risk changing jobs because of Covid. And while talk of a mass exodus is exaggerated, some EU citizens have gone home.

To cap it all, furlough is starting to do more harm than good. People should be encouraged to return to work as normal or move on to other jobs ‑ and there are better ways to support those who still need extra help.

The scheme has been a huge success, but it is now the right time to wind it down.

Julian Jessop is from the Institute of Economic Affairs

The doom-mongers have been proved wrong.

Grim post-Covid forecasts would have us believe Britain should be facing mass unemployment, business failures, recession and declining standards of living.

Yet it has hardly worked out like that. After the initial shockwaves from the pandemic, the economy has undergone a remarkable recovery, helped by our innate national resilience and the creative policies of the Chancellor Rishi Sunak.

Yesterday, official figures showed that furlough levels fell to 1.6 million in July, down by 340,000 on June and a massive decline from January, when there were no fewer than 5.1 million people on furlough.

Success getting back to normal was also reinforced this week ‑ with trips on buses up 71 percent and on the Tube up 22 percent in the capital.

Barclaycard, which analyses half the nation’s debit and credit card transactions, reported a 15.4 percent increase in Britons’ spending in August, compared with the same month in 2019.

Money spent on hotels, resorts and accommodation also rose for the third consecutive month. The property market, one of the key engines of the economy, continued to boom, while the number of job vacancies is currently over one million.

While the doomsters claim that recovery is hampered by excessive labour shortages that were worsened by the end of free movement caused by our EU departure, the truth is that one of the key aims of Brexit was to end the reliance on cheap, imported labour and to push up domestic earnings.

This is happening now. The post-Brexit tightness in the labour market has led to a boom in pay, with weekly earnings up by 8.8 percent over the last year.

In fact, after furlough ends next month, the biggest economic problem will be skill shortages in the workforce ‑ largely caused by the neglect of training and apprenticeships for Britons because of imported labour.