The Foreign Secretary demanded that the European Council President “set the record straight” as another major cross-Channel row over vaccines broke out. Mr Raab also summoned the EU’s ambassador to London for a dressing down because Downing Street had repeatedly had to “correct the record” on false claims by the bloc. In an angry letter to Mr Michel, he wrote: “The UK Government has not blocked the export of a single COVID-19 vaccine or vaccine components.

“Any references to a UK export ban or any restrictions on vaccines are completely false.”

The Foreign Secretary added: “We are all facing this pandemic together.”

The row blew up after Mr Michel, the EU’s most senior official, claimed the UK and US have vaccine exports ban in a desperate defence of the bloc’s move to prevent a shipment of 250,000 life-saving jabs to Australia.

In a newsletter sent to 20,000 readers, the Council President wrote: “I am shocked when I hear the accusations of vaccine nationalism against the EU. 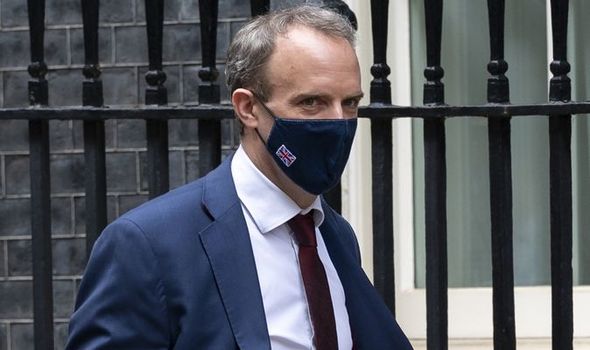 “The UK and US have imposed an outright ban on the export of vaccines or vaccine components produced on their territory.

“But the EU has simply put in place a system for controlling export of doses in the EU.”

The US has a vaccines export ban in place, but Britain doesn’t.

Desperate EU officials leapt to the defence of Mr Michel, claiming the UK has medicines restrictions that are “tantamount to an export ban”.

Asked to provide exact details of the mechanisms, one insider close to the Council chief was unable to provide an answer to Express.co.uk.

The official said Mr Michel’s words were made on the strength of “information provided to us by the Commission”.

In a bizarre twist, the European Commission denied that this information ever existed or was passed to the Council.