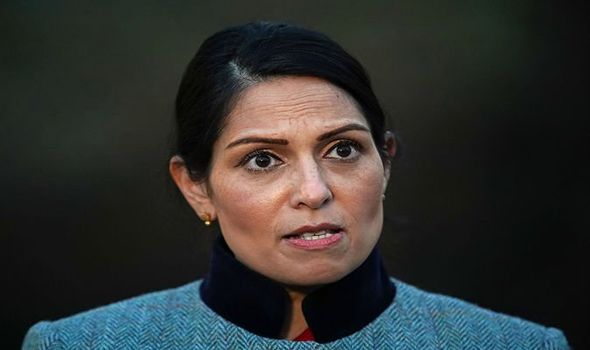 A plane landed on Thursday carrying 20 people who had no right to be in the United Kingdom.

The passengers included eight “serious foreign criminals” with convictions for drugs production and “intent to supply class A and B drugs”.

The group had a combined prison sentence of 23 years and 8 months.

A further 11 people were taken back to Vietnam as part of the “voluntary returns service” as well as another person with no right to be in Britain.

Altogether, 25 foreign criminals have been returned to Vietnam. The first flight took place on April 21.

Home Secretary Priti Patel said: “I make no apology for removing criminals who are trying to cheat our asylum system, overstay their welcome or fuel crime in our communities. This flight removed serious foreign criminals involved in producing and supplying lethal drugs.

“These offenders will no longer be able to poison our communities, ruin lives and cash in on vulnerable people and the British people should know I will continue to do everything in my power to remove such appalling criminals from our country.”

Since January 2019, more than 9,500 foreign criminals have been returned.

Ms Patel’s “new plan for immigration” is intended to “strengthen the Government’s ability to stop the abuse of the system and expedite the removal of those who have no right to be here”.

She said: “The new laws I am introducing through our New Plan for Immigration will make it easier to remove individuals like this by preventing last-minute claims which can thwart the removal of dangerous criminals and people with no legal right to remain in our country.”

The Home Secretary is seeking to overhaul the law with her Nationality and Borders Bill. The Government says it is intended to create a fairer system so better protection and support can be given to those in “genuine need” of asylum.

However, it is also intended to “deter illegal entry” by “breaking the business model of criminal trafficking networks and saving lives and to ensure that those with no right to live in the UK are removed.

Westminster’s Joint Committee on Human Rights has launched an investigation into the Bill, which would make it a criminal offence to knowingly arrive in the UK without permission and give the border force greater powers to turn back people arriving by boat. The MPs and peers will “assess its compatibility with human rights law” and have invited the public to submit written evidence.