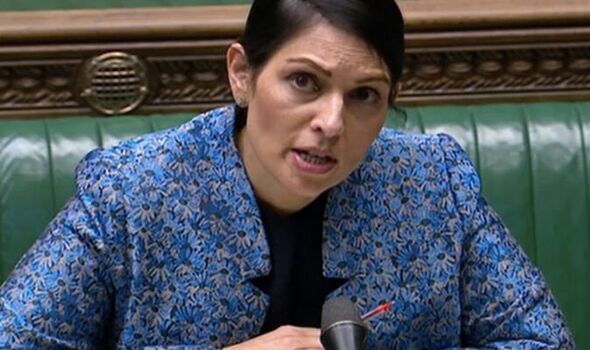 The Home Secretary told MPs in the Commons that “Britain continues to lead and is doing its fair share” for those impacted by Russia’s invasion.

It warned a further 4.5 million could leave the country if war continues to spread.

She said on top of the current visas available for close family members of those with a right to live in the UK, tens of thousands more refugees would be welcomed to the UK.

Me Patel said this afternoon: “Our new route will continue to keep pace with the developing situation on the ground and so far has already supported hundreds of British nationals and their families resident in Ukraine to leave.

“The UK visas and immigration staff continue to work around the clock to assist them.”

She added: “We are in direct contact with individuals and we’ve also lowered various requirements and salary thresholds so that people can be supported.

“Where family members of British nationals do not meet the usual eligibility criteria, but pass security checks, UK visas and immigration will give them the permission to enter the UK outside the rules for 12 months and is prioritising all applications.

“Giving British nationals and any person settled in the UK the ability to bring over their immediate Ukrainian family members.”

She told the Commons “an additional 100,000 Ukrainians will be able to seek sanctuary in the UK, with access to work and public services” under the new route.

She continued: “We are enabling Ukrainian nationals already in the UK, giving them the ability to switch free of charge into a points-based immigration route or through the family visa route.

“We are extending visas for temporary workers in some sectors and they can now stay until at least December 2022.”

She added that President Putin’s war on a European democracy was “monstrous and unjustified”.

The move comes after Tory and opposition MPs demanded the Government do more to welcome those fleeing.