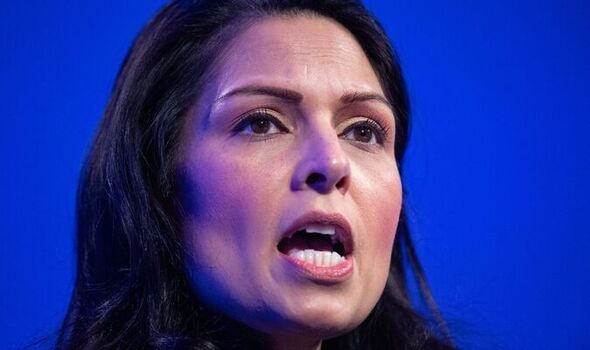 MPs will have the opportunity to restore some of the most contentious aspects of the Police, Crime, Sentencing and Courts Bill later this month. The plans have triggered “kill the bill” protests and Amnesty International has warned that “your right to peacefully protest is at risk”.

Ms Patel said: “I will always champion the right to protest peacefully and energetically within the law, and to suggest that this Bill ‘bans noisy protests’ is ignorant and irresponsible. The threshold for imposing conditions based on noise will be high and most protests wouldn’t reach it.

“But in recent years we have seen a selfish minority using egregious noise, not as a method of legitimate expression, but to antagonise others from the enjoyment of their own liberties.

I know Sunday Express readers would agree that nobody should have unchecked rights to intimidate or endanger the public – or prevent hard-working businesses from functioning.

“MPs voted these measures through last year, promising greater protection for the rights of the British public to go about their daily lives, free from extreme disruption and harm. This promise must be upheld.”

The plans to toughen laws follow widespread anger at the protest tactics of groups such as Insulate Britain, which blocked motorway traffic, and Extinction Rebellion – famed for its city centre demonstrations – which claims the legislation “seeks to put an end to effective protests”. Policing Insulate Britain’s road-blocking protests over three months last year reportedly cost more than £4million.

Under the Home Secretary’s plans, the maximum penalty for obstructing a highway will be increased from £1,000 to an unlimited fine, six months’ imprisonment, or both. Ms Patel wants to overturn a Lords amendment which means this only applies to a blockade of roads within the strategic road network.

The Government also wants to bring the laws on “static protests” in line with marches so they would be subject to a wider range of conditions.

A Labour spokeswoman attacked Ms Patel’s plans, saying: “Instead of using the police bill to stop criminals, increase sentences for rape or tackle violence against women as Labour called for, Priti Patel is trying to criminalise people for singing in the street. All she is interested in is headlines, rather than tackling serious crimes. Under the Tories crime is up, criminals are being let off and victims are being let down”.