A Conservative Party loss at either seat could reignite speculation of a new challenge from Tory MPs against Mr Johnson. The by-elections were allied following Wakefield MP Imran Ahmad Khan stepping down after having been convicted of sexually assaulting a teenage boy.

Meanwhile, Tiverton and Honiton MP Neil Parish quit after watching pornography in the House of Commons.

Mr Johnson has said he would be “crazy’’ to resign if the Conservatives were to lose the by-elections and vowed not to resign if his party were defeated.

Polls show that the Tories could lose both seats if Labour reclaim Wakefield and Labour supporters vote tactically in Devon.

The West Yorkshire constituency had been a safe seat for Labour before Tory candidate Khan’s win in 2019, and Labour is the clear favourite to win it back.

The Devon constituency is a neck-and-neck race between the Conservatives and the Liberal Democrats, despite being strongly Tory for more than a century. 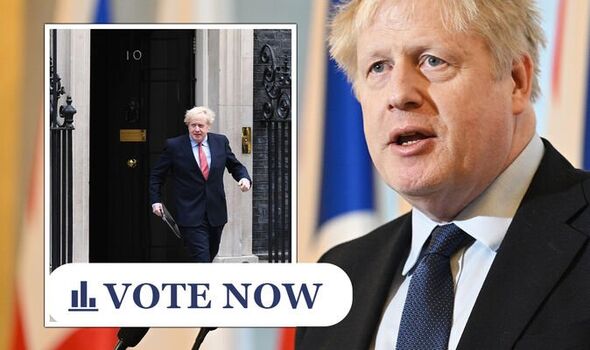 On Wednesday evening before travelling to Rwanda for the Commonwealth Heads of Government Meeting, Mr Johnson was asked if he would quit if voters were to turn against his Party.

He said: “Come on, it was only a year ago that we won the Hartlepool by-election, which everybody thought was – you know, we hadn’t won Hartlepool for – I can’t remember when the Tory party last won Hartlepool – a long time.”

He continued:  “I don’t think it ever had. Governing parties generally do not win by-elections particularly not in mid-term. You know, I’m very hopeful, but you know, there you go. That’s just the reality.”

When asked whether he would quit in the event of a double defeat he said: “Are you crazy.”

Last year, the Conservative Party won Hartlepool, turning the Labour constituency blue for the first time since it was created.

The by-elections are the first electoral test Mr Johnson faces since he won a vote of confidence in his leadership.

If the Conservative Party were to lose both seats it would be the first time such an event had happened in more than 30 years.

Election guru Sir John Curtice has said that a double defeat could mean the Government risks losing its electoral footing.

Voters in both constituencies have until 10pm to cast their ballots and results are expected between 4am and 6am tomorrow, Friday, June 24.

So what do YOU think? Should Boris Johnson resign if Conservatives lose by-elections? Vote in our poll and join the debate in the comment section below.