A series of damaging leaks and revelations have been made in recent days to undermine the Prime Minister’s premiership. Sources have leaks accusations to the media that Mr Johnson said he would rather “let the bodies pile high” than order a new national lockdown in autumn last year.

He has also been accused of breaking electoral law by using a loan from the Conservative Party to pay for renovations to his Downing Street flat.

In a huge blow to Mr Johnson ahead of PMQs, the electoral commission has announced it is launching an investigation into the funding.

It said in a statement: “We are now satisfied that there are reasonable grounds to suspect that an offence or offences may have occurred.”

The alleged scandal is a gift for Labour leader Sir Keir Starmer at the dispatch box. 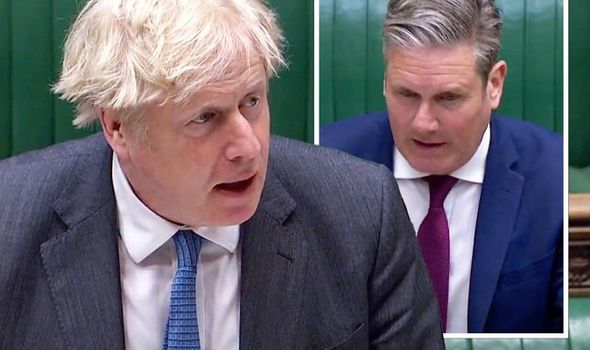 The Prime Minister has announced he has appointed a new independent adviser on ministers’ interests.

Lord Geidt, who used to advise the Queen, will oversee matters on ethics.

It is likely Mr Johnson hoped the announcement of the appointment would help kill off stories surrounding his Downing Street flat refurbishment.

However, the electoral commission’s announcement that it is launching a probe into the issue has taken away from Lord Geidt’s appointment.

Less than an hour before PMQs was due to begin the electoral commission made a bombshell announcement.

It said it was investigating whether Boris Johnson has broken the law by not declaring a loan to fund his Downing Street flat renovation.