WASHINGTON — When Defense Secretary Lloyd J. Austin III convened his military brain trust last Thursday on a classified videoconference for an update on Afghanistan, commanders had reason to feel positive.

The American troop drawdown that President Biden ordered in April was complete — two months ahead of schedule. The last combat forces would exit the military’s hub at Bagram Air Base overnight, leaving just 650 troops to help secure the United States Embassy in Kabul and Kabul International Airport. There was even talk that the top American commander in Afghanistan, Gen. Austin S. Miller, would leave for good in a few days.

But reality steadily intruded in the days leading up to Mr. Austin’s meeting with General Miller; Gen. Mark A. Milley, the chairman of the Joint Chiefs of Staff; and Gen. Kenneth F. McKenzie Jr., the head of the military’s Central Command. The Afghan Army was reeling from a series of defeats in battles against the Taliban. The Afghan Air Force faced grounding without contractor support that was scheduled to end. And Mr. Biden’s plan to relocate thousands of Afghan interpreters, drivers and others who worked with American forces in an effort to keep them safe had stalled.

With the White House’s blessing, Mr. Austin, a retired four-star Army general who oversaw the American troop withdrawal from Iraq in 2011, ordered a series of steps to slow the pace of the final withdrawal from America’s longest war. The measures would buy some time to soften the drawdown’s psychological shock to the Afghans, and to extend at least through August an American security umbrella that no longer had any combat troops, equipment or bases in the country.

The first measure sought to underscore Mr. Biden’s message to Afghan leaders that the United States was not abandoning the country at a moment when intelligence analysts assess that the government could fall in as few as six months to a resurgent Taliban.

General Miller will remain in Afghanistan for “at least a couple more weeks,” John F. Kirby, the Pentagon spokesman, told reporters on Friday, to help transition the American military mission from warfighting to two new objectives — protecting a continuing U.S. diplomatic presence in Kabul and maintaining liaison with the Afghan military.

General Miller will turn over his command to General McKenzie, who from his headquarters in Tampa, Fla., will assume at least through August the same authorities General Miller had to carry out airstrikes against Al Qaeda, the Islamic State and, in very limited circumstances, Taliban fighters, Pentagon officials said. 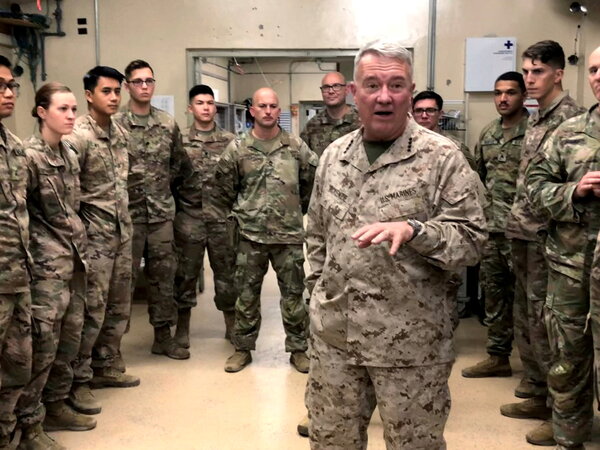 General McKenzie will be authorized, at least through September, to move 300 additional troops into Afghanistan if needed for security or emergencies, like the possible evacuation of the American Embassy, a growing concern amid the deteriorating security in the country, Pentagon officials said.

Over the next few weeks, General Miller will travel within Afghanistan, as well as to Brussels, to brief NATO officials on the transition, and to the forward headquarters in Qatar, Pentagon officials said. One senior official described General Miller’s travels as “a hand-holding tour.”

Mr. Biden had given the military until Sept. 11 to complete the withdrawal, but with only 3,500 troops left in Afghanistan, the pullout went much faster than expected. Several Pentagon officials and military commanders predicted the mission could wrap up by early to mid-July.

But Mr. Kirby said for the first time on Friday that the withdrawal would now be completed by the end of August, a subtle but significant shift that is intended to help achieve at least three objectives, officials said.

First, it will extend the contracts of a few hundred of the 18,000 Pentagon contractors who now provide essential maintenance to and resupply missions for the Afghan military.

The Afghan Air Force, in particular, is heavily reliant on American and other foreign contractors for repairs, maintenance, fueling, training and other jobs necessary to keep it operating. Those contractors are now departing along with the American military, leaving a void that U.S. and Afghan leaders say could be crippling to Afghan forces as they face the Taliban alone.

DynCorp and Leidos, and their subcontractors, now provide the main support to the air force and the Afghan fleet of Black Hawk helicopters, officials said. Both contractors declined to comment on their operations in Afghanistan.

The August date also gives the administration more time to find places to relocate thousands of Afghans, and their family members, who helped Americans during the 20-year war. The White House has come under heavy pressure to protect Afghan allies from revenge attacks by the Taliban and speed up the lengthy and complex process of providing them with special immigrant visas.

Administration officials previously said they were looking at Guam as one possible location, but State Department officials say they need multiple sites. The foreign ministers of Tajikistan and Uzbekistan were both in Washington last week, and the issue of Afghan security was raised in their meetings with Mr. Austin and Secretary of State Antony J. Blinken.

Finally, having General Miller stay on a few more weeks, and extending the security umbrella at least through August, is intended to offer, if nothing else, a boost for beleaguered Afghan troops. Pentagon officials said that exiting Bagram Air Base and having General Miller leave at the same time would have been a devastating blow to Afghan morale.

“A safe, orderly drawdown enables us to maintain an ongoing diplomatic presence, support the Afghan people and the government, and prevent Afghanistan from once again becoming a safe haven for terrorists that threatens our homeland,” Mr. Kirby said.

The White House joined in the reassurance messaging campaign on Friday — up to a point. Mr. Biden said that even though the United States still retained the ability to conduct airstrikes to protect the Afghan government, no reversal of the withdrawal was on the table.

“We have worked out an over-the-horizon capacity,” he said, talking about American warplanes and armed Reaper drones based mainly in the Persian Gulf, “but the Afghans are going to have to do it themselves with the air force they have.”

But all American combat troops and aircraft are now out of Afghanistan, officials said, so any military support to the Afghan forces will have to come from American bases eight hours away in Qatar or the United Arab Emirates.

“Our leaving does not end the war. It just ends the American involvement,” said John R. Allen, a retired four-star Marine Corps general who commanded U.S.-led forces in Afghanistan from 2011 to 2013, and oversaw the beginning of the drawdown of allied forces there, from 150,000 troops to about 11,000, at the end of 2014. “The war will continue.”