The pure savagery of the mob that rampaged through the Capitol that day was breathtaking, as cataloged by the injuries inflicted on those who tried to guard the nation’s elected lawmakers. One police officer lost an eye, another the tip of his finger. Still another was shocked so many times with a Taser gun that he had a heart attack.

They suffered cracked ribs, two smashed spinal disks and multiple concussions. At least 81 members of the Capitol force and 65 members of the Metropolitan Police Department were injured, not even counting the officer killed that day or two others who later died by suicide. Some officers described it as worse than when they served in combat in Iraq.

And through it all, President Donald J. Trump served as the inspiration if not the catalyst. Even as he addressed a rally beforehand, supporters could be heard on the video responding to him by shouting, “Take the Capitol!” Then they talked about calling the president at the White House to report on what they had done. And at least one of his supporters read over a bullhorn one of the president’s angry tweets to charge up the crowd.

If nothing else, the Senate impeachment trial has served at least one purpose: It stitched together the most comprehensive and chilling account to date of last month’s deadly assault on the Capitol, shedding light on the biggest explosion of violence in the seat of Congress in two centuries. In the new details it revealed and the methodical, minute-by-minute assembly of known facts it presented, the trial proved revelatory for many Americans — and even for some who lived through the events.

There were close calls and near misses as the invaders, some wearing military-style tactical gear, some carrying baseball bats or flagpoles or shields seized from the police, came just several dozen steps from the vice president and members of Congress. There was almost medieval-level physical combat captured in body-cam footage and the panicked voices of officers on police dispatch tapes calling for help. There were more overt signs about the coming violence from social media in the weeks leading up to Jan. 6 than many lawmakers had understood.

“Until we were preparing for this trial, I didn’t know the extent of many of these facts,” Representative Madeleine Dean, Democrat of Pennsylvania and one of the managers, told senators on Saturday. “I witnessed the horror, but I didn’t know. I didn’t know how deliberate the president’s planning was, how he had invested in it, how many times he incited his supporters with these lies, how carefully and consistently he incited them to violence on January the 6th.” 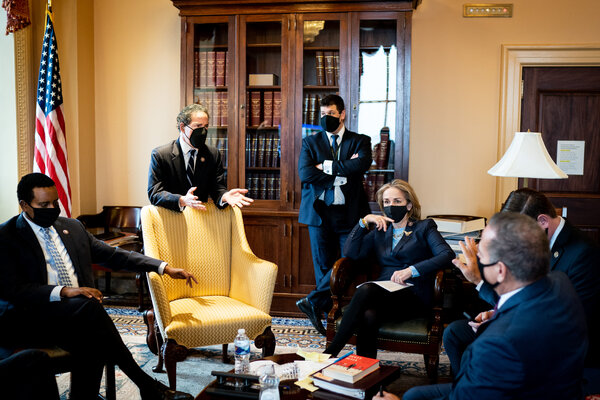 Yet for all the heart-pounding narrative of that day and the weeks leading up to it presented on the Senate floor, what was also striking after it was all over was how many questions remained unanswered on issues like the financing and leadership of the mob, the extent of the coordination with extremist groups, the breakdown in security and the failure in various quarters of the government to heed intelligence warnings of pending violence.

And then, most especially, what the president was doing in the hours that the Capitol was being ransacked, a point that several wavering Republican senators tried to home in on through questions to the prosecution and defense and that briefly blew up the trial on Saturday.

The House managers were able to introduce a statement from a Republican congresswoman, Jaime Herrera Beutler of Washington, describing what she was told about a profanity-laden telephone call that Representative Kevin McCarthy of California had with Mr. Trump in the middle of the attack.

What You Need to Know