WASHINGTON — Senator Mitch McConnell, Republican of Kentucky and the minority leader, asked Democrats on Thursday to delay former President Donald J. Trump’s impeachment trial until mid-February, complicating their hopes of reaching a swift agreement to prevent the proceeding from interfering with the crucial first weeks of President Biden’s tenure.

Mr. McConnell made the request on a day when Mr. Biden’s call for unity was already running into partisan dysfunction in the Senate. Mr. McConnell and Senator Chuck Schumer, Democrat of New York and the majority leader, were locked in a separate stalemate over how they would share power and whether Democrats would promise to preserve Republicans’ ability to filibuster legislation.

The deadlock highlighted Mr. McConnell’s determination to maintain his leverage to thwart Mr. Biden’s priorities and the difficulty Democrats would have doing business with a one-vote majority.

The result: On Mr. Biden’s first full day in office and Democrats’ first in total control of Congress, the Senate was in a state of suspended animation, unable to move forward with even the basic tasks of organizing committees or setting rules for getting virtually anything done.

In a statement, the Republican leader argued that the former president’s defense team needed “a modest and reasonable amount of additional time” to prepare a case for trial after the House raced to charge Mr. Trump with incitement of insurrection for his role in encouraging the violent mob that stormed the Capitol on Jan. 6. Mr. McConnell proposed that the House bring its case late next week and then give Mr. Trump’s defense team — to be led by Butch Bowers, a lawyer from South Carolina — until Feb. 13 to begin oral arguments.

“At this time of strong political passions, Senate Republicans believe it is absolutely imperative that we do not allow a half-baked process to short-circuit the due process that former President Trump deserves, or damage the Senate or the presidency,” said Mr. McConnell, who has told colleagues that he is open to convicting the president.

Democrats had been preparing to begin a trial as soon as Monday, and hoped to reach a resolution in a week or less to try to minimize the effects of a divisive and all-consuming proceeding during Mr. Biden’s first days in the White House. But they also want to claim that they held a fair trial, and they could end up embracing a delay to quickly confirm more of Mr. Biden’s cabinet.

Earlier on Thursday, Speaker Nancy Pelosi had declined to say when she planned to send the House impeachment charge to the Senate, which would immediately start the clock for beginning the trial. She said only that she would do so “soon.”

The lingering disputes over how to proceed with Mr. Trump’s trial and the Senate’s business reflected the speed with which Mr. Biden’s optimistic calls to sweep aside partisan animus and tackle a daunting set of overlapping crises were dissipating in the realities of the polarized Congress.

Republican leaders in the House and Senate, who not 24 hours before had extended warm congratulations, were swiftly retreating into their partisan corners. Even as they pledged to keep open minds, they criticized Mr. Biden’s decision on Wednesday to re-enter the Paris climate agreement and his proposal to overhaul the nation’s immigration system.

“The wrong priorities at the wrong time,” declared his counterpart in the House, Representative Kevin McCarthy of California.

Mr. McConnell in particular was returning to a familiar role as the chief tactical antagonist to the majority, trying to use negotiations over a typically anodyne set of rules for operating the Senate to weaken Democrats’ power to push through Mr. Biden’s agenda over unified Republican opposition.

Because the chamber is split 50-50, Republican cooperation is needed to settle the rules. But Mr. McConnell has made his signoff contingent on a promise by Mr. Schumer not to eliminate the filibuster, which effectively imposes a 60-vote threshold to advance legislation.

“If the talk of unity and common ground is to have meaning,” Mr. McConnell said, “then I cannot imagine the Democratic leader would rather hold up the power-sharing agreement than simply reaffirm that his side won’t be breaking this standing rule of the Senate.”

The demand has placed both Mr. Biden and Mr. Schumer in a difficult spot, accelerating a debate that was always going to be tricky for Democrats. Progressives favor getting rid of the filibuster to allow them to bypass Republicans altogether and win crucial pieces of Mr. Biden’s agenda. Others say it is the only way to adopt the kind of change needed to confront climate change, racial injustice and the nation’s faltering health care system. But centrists like Senator Joe Manchin III, Democrat of West Virginia, are opposed; some Democrats caution that scrapping the rule could quickly backfire if their party loses Senate control next year.

Mr. Schumer, who has remained publicly undecided about the filibuster, insisted on Thursday that Democrats would not let Mr. McConnell prematurely tie their hands or divide them.

“Our caucus is strongly opposed to any extraneous provisions,” he told reporters, “and so we are going to keep working to try and get a bipartisan agreement.”

He appeared to have Mr. Manchin’s backing.

“Chuck is right to do that, he’s the leader,” Mr. Manchin said. “I’m not worried about that at all. They will work it out. I just haven’t changed where I’m at.”

With Democrats’ margin of control so narrow, Mr. Manchin’s opposition alone would be enough to prevent the change. But it was unclear his assurances were enough to get Mr. McConnell to back down.

Jen Psaki, the White House press secretary, declined to say what Mr. Biden thought about the prospect of scrapping a rule that has been a mainstay of the Senate, where he served for 36 years.

“The president has been clear,” Ms. Psaki said. “He wants to work with both parties and find bipartisan paths forward.”

Though the dispute was arcane, its practical effect could be significant if it persists. Without an organizing resolution, Democrats’ ambitions for advancing another coronavirus aid package or any tax, infrastructure or health care legislation that gathered dust when Republicans controlled the Senate were essentially paralyzed.

In the short term, the dispute created a surreal dynamic, where Mr. Schumer claimed the mantle of majority leader, even as the chamber’s influential committees — way stations for Mr. Biden’s agenda — continued to be overseen by Republican chairmen.

Senator Richard J. Durbin of Illinois, the No. 2 Democrat, who is expected to take over the Judiciary Committee, said dryly that he did not know who was in charge of his panel.

“We know it could be one of three people,” he said. They included him; Senator Lindsey Graham of South Carolina, who held the gavel last term; or Senator Charles E. Grassley of Iowa, who was expected to take the top Republican slot from Mr. Graham this term.

A spokesman for Senator Jack Reed, Democrat of Rhode Island, who was in line to lead the Armed Services Committee, warned reporters not to call his boss “chairman” just yet, or anytime soon.

“When will the official change happen?” the aide, Chip Unruh, wrote. “I wish I knew.”

Some committees, including the one overseeing the coronavirus response, simply could not convene at all because their former Republican chairmen had retired.

Others were more optimistic. Senator Tim Kaine, Democrat of Virginia, predicted a swift end to the haggling over the organizing resolution. “It just looks kind of churlish not to,” he said. “They have plenty of tools in the minority.”

He added: “To stop the organizing resolution and block committee assignments and things like that just seems kind of petty. I just have a feeling we’ll get there.” 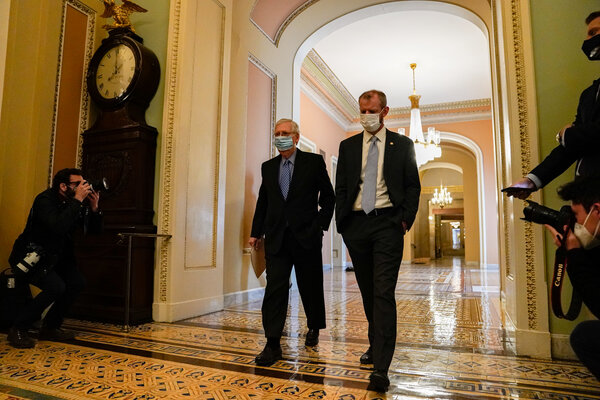