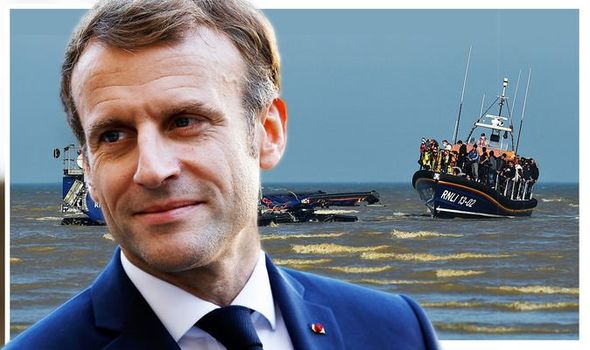 France’s failure to stop the dangerous crossings threatens to damage already fraught relations with the UK, just as Britain attempts to negotiate major changes to the Brexit deal governing trade with Northern Ireland. Prime Minister Boris Johnson has pressed for France to “police the beaches” after a record-breaking 1,185 people reached the UK on Thursday. Tony Smith, a former head of the border force has accused France of “turning a blind eye” to the deaths of migrants and the activities of criminal gangs.

Former security minister Sir John Hayes urged the Government to bring forward plans to turn back the boats, saying: “If not now, when?” More than 23,500 people have crossed the Channel this year, up from 8,420 last year.

Sir John, who leads the Common Sense group of MPs and has met with immigration minister Tom Pursglove, warned that the crossings “make a nonsense of the claim that we’ve taken back control of our borders”.

He added: “[The] Government really needs now to do what I know they’ve been planning for some time, which is to turn back the boats and to process all asylum applications offshore. [In] Australia that had a dramatic effect on the number of people crossing because the truth is that a combination of people traffickers, economic migrants, and irresponsible and greedy rights lawyers are gaming the asylum system.”

Australia ignited international controversy after it launched Operation Sovereign Borders in 2013. The military towed boats back to Indonesia and people who did reach Australia were sent to offshore processing centres.

He said: “It’s a big issue in the constituency… The patience of the Conservative voter with the Government to deal with this issue is reaching its elastic limit… This is something that the Government has over-promised and shockingly under-delivered [on]. It’s got to be addressed.”

Pushing for reform of the Human Rights Act, he added: “[We] should deport them immediately which would be a disincentive for people to waste their money with ruthless people traffickers, placing themselves in mortal danger. If they knew they were going to be turned around immediately and sent back to France, it would only take a week and it would stop…

“If then they are eligible to come to the UK they should apply through normal channels because what they are doing by entering the country illegally is making a mockery of our immigration system.”

The Government can expect widespread condemnation if it adopts tougher tactics, with the UN Special Rapporteur on the human rights of migrants earlier this year denouncing the “cruel and deadly practice of pushing back migrants”.

However, the Conservatives are also under pressure from Reform UK, the successor to the Brexit Party. Party leader Richard Tice said: “The Government is not determined to stop this or they would have done. They have a big majority but no political will, nor appetite to take this on.

“If I was in charge it would stop in a week. Pick the migrants up into border force boats and take them back to France… The French will whinge and moan but there is nothing they can do to stop us. They are not going to shoot us are they? The Home Office is simply incompetent and does not want to carry out the will of the politicians and public.”

But Enver Solomon, chief executive of the Refugee Council, stressed the dire situation facing people who have fled their home countries. He said: “Increasing numbers of people making terrifying journeys across the Channel in freezing cold weather, is a dreadful reminder of the lengths people are forced to take to be safe. These are people who face war, terror and persecution in their home countries and are doing whatever they possibly can to flee danger.

“The government must take action now. We urge them to increase safe routes for people to come to the UK, to join family members who have been recognised as refugees, to seek asylum alongside their loved ones, or to resettle from a country that is struggling to cope with the numbers of refugees it is supporting. It is these actions that will stop people in desperate danger having to put their lives in further danger by making such perilous journeys.

“Every man woman and child must be treated with compassion and humanity when they arrive here – sadly, we know that this is not happening. People spending their first night in the UK having endured a petrifying journey by sleeping on unclean floors and having to use unsanitary toilets is simply not good enough. We urge the government to address this urgently.”

A Home Office spokeswoman said: “The number of illegal migrants we have seen departing from France is unacceptable. The British public have had enough of seeing people die in the Channel while ruthless criminal gangs profit from their misery and our New Plan for Immigration will fix the broken system which encourages migrants to make this lethal journey.”