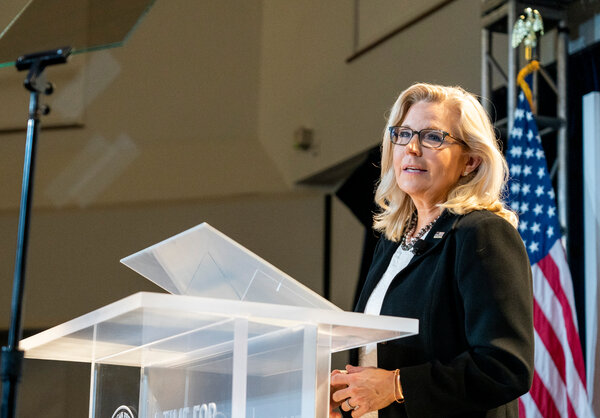 Tonight’s big news will be the fate of Representative Liz Cheney, whose latter-day conversion from dedicated Republican partisan to Donald Trump’s chief inquisitor in Congress has been one of the most compelling story lines of the last 18 months.

In just a few hours, we should know whether Cheney is able to retain her seat as Wyoming’s lone House member while helping investigate her own party’s leader — or whether her decision to do so has made her anathema to Republican base voters.

You’ll be able to follow the results here once polls close at 9 p.m. Eastern time.

Surveys show Cheney well behind her primary opponent, a Trump supporter named Harriet Hageman, even though she has vastly outraised and outspent her challenger thanks to her much louder national megaphone.

But it’s precisely her fame that has probably doomed Cheney with Trump’s core voters, who see her as an apostate and a traitor to their cause.

It was Cheney who spoke up inside the Republican Party after the assault on the Capitol, asking her colleagues whether Trump was considering resigning after whipping up the mob on Jan. 6, 2021.

It was Cheney whose excommunication from the G.O.P. has driven a much larger discussion about the direction of a party that has become, in the eyes of many, a cult of personality centered on a person who is utterly unmoored from traditional conservative principles.

And it was Cheney whose road-to-Damascus moment has awakened her to an entirely new mission: from rapidly ascending the ranks of Republican leadership in the House to turning her back on a party whose course her family has done so much to shape.

To make sense of Cheney’s astonishing turn — and her apparent stoicism in the face of what looks like almost certain defeat in today’s primary election in Wyoming — I spoke with my colleague Jonathan Martin, who knows the full arc of her story about as well as anyone.

Our conversation, lightly edited for length and clarity:

Republicans I speak with often seem baffled by Liz Cheney. They want to know what her real motivations are, assuming she has some ulterior political aims beyond the Jan. 6 committee that explain her stance against Trump. What do you make of that?

I think it’s fair to say — and perhaps quite obvious — that she’s resigned to losing her primary. But as for motivations, I don’t think it’s more complicated than what she’s said publicly about her paramount goal: to stop Trump from returning to the White House.

More Coverage of the 2022 Midterm Elections

That’s clearly the aim of her work on the Jan. 6 committee (which, far more than the Wyoming primary, is her focus). As we reported recently, she privately told her colleagues on the panel in July that they had done “more to prevent Trump from ever regaining power than any group to date.”

What do you think Liz Cheney learned about politics or life or public service from her dad?

I’d only tweak the question to say she’s still learning.

They remain very close, speaking every day. In fact, Liz’s inner circle is not much larger than her parents and her longtime chief of staff. She inherited her policy views, love of history and belief in American exceptionalism from both parents (don’t forget, her mother, Lynne, is a historian). Their view of Trump is clear enough from Liz’s comments and the former vice president’s recent ad.

But there’s something else that’s not as well known — the family’s love for the House. History would be different if Liz had run for Wyoming’s open Senate seat in 2020.

But she grew up in a House family, her dad serving as the second-ranking Republican in the 1980s. Her parents even wrote a book, “Kings of the Hill,” on somewhat forgotten House speakers of the past. And Liz herself appeared to be on track to be a future speaker until she broke with much of her party after the 2020 election.

I’ve heard it said that Cheney thinks she is playing to history, and that she is willingly choosing martyrdom in Wyoming because in some sense she thinks it’s fate. Does that sound right to you?

Yes indeed. She believes strongly that she’s answering history’s call and that Trump must be stopped to protect her party and the country.

For the wonks out there, Liz is very much a believer in the Great Man theory of history, and she wishes American schools would rededicate themselves to this approach. She told me as much when I interviewed her in Cheyenne this month.

I think we all assume she’s going down with the ship tonight in Wyoming. Aside from the top-line result, what are you looking for in the numbers?

I’m very curious about the urban-rural gap and what could be called the education divide. We know from polling that Trump is stronger with Republicans without college degrees. How much does that show up in the proxy war here in Wyoming?

We have this single-minded focus in the Washington chattering class about whether famous politicians like Cheney want to run for president. But of course, there are other options, like setting up a political action committee to throw your weight around, as John Bolton did, or starting some kind of think tank or institute, as John McCain did. What are you hearing about what the Liz Cheney superfans in the disaffected corners of the G.O.P. want her to do next?

I think it’s totally plausible that she could run for president or set up an organization to block Trump. And I think as long as Trump is blocked, her fans would be quite content.

In case you missed it, Jonathan Martin visited Cody, Wyo., on the eve of Tuesday’s Republican primary — which he called “the likely end of the Cheneys’ two-generation dynasty in Wyoming as well as the passing of a less tribal and more clubby and substance-oriented brand of politics.”

In “Liz Cheney and the Fate of the 10 Republicans Who Defied Trump,” Michael Bender and Malika Khurana assess the former president’s campaign of vengeance against the House Republicans who voted to impeach him over the Capitol riot.

Reid Epstein trudged around Wyoming back in February, when it was still unclear whether Cheney was planning to run again. What he found: a state that seemed ready to choose Trump over his would-be nemesis.

For The New York Times Magazine, Robert Draper went deep last year on Cheney’s decision to embrace her role on the Jan. 6 committee and set aside her ambitions within the mainstream of the Republican Party.

And our colleagues in The Times’s Opinion section heard from 13 voters in Wyoming who will decide Cheney’s fate.

Beyond Liz Cheney’s race in Wyoming, two other prominent Republican women — Senator Lisa Murkowski and Sarah Palin, the former vice-presidential nominee — are facing primary voters today in Alaska. Follow live updates on both states (though be forewarned that because of Alaska’s unique election system, its contests might not be called tonight).

Two top House Democrats accused the Trump-appointed internal watchdog of the Department of Homeland Security — who is under criticism for his handling of an investigation into missing Secret Service text messages around the time of the Capitol riot — of refusing to cooperate with congressional demands, and even blocking his employees from testifying before Congress.

Pat Cipollone and Patrick Philbin, the White House counsel and his deputy under Trump, are said to have been interviewed by the F.B.I. in connection with boxes of sensitive documents that were stored at Mar-a-Lago after Trump left office, Maggie Haberman reports. (Here’s a timeline of Trump’s false and misleading comments about the search of his Florida residence.)

Nicholas Fandos profiles Representative Carolyn Maloney, who is “nearing the endgame of an unwelcome, wide-open and increasingly vicious primary fight against her longtime congressional neighbor, Representative Jerrold Nadler, after a New York court unexpectedly combined their Manhattan districts this spring.”

Is there anything you think we’re missing? Anything you want to see more of? We’d love to hear from you. Email us at [email protected].