WASHINGTON — When Senator Kyrsten Sinema stepped onto the Senate floor on Friday to vote against including a minimum-wage increase in President Biden’s pandemic aid bill, she knew she would draw the ire of progressives in her own party.

Ms. Sinema, Democrat of Arizona, did it anyway, punctuating her defection from the party line with a jaunty thumbs-down.

Senators frequently use the motion to register their opposition to legislation, and she was one of eight on the Democratic side to vote against the wage increase. But Ms. Sinema’s gesture drew a singularly scathing response from liberal lawmakers and activists, who accused her of callously casting her vote to deny workers higher pay.

The backlash captured the simmering anger that progressives harbor toward Ms. Sinema, a onetime Green Party activist turned centrist who has emerged as an impediment to their highest aspirations in the 50-50 Senate, where she is one of a handful of moderates who hold outsize sway.

Her refusal to embrace progressive priorities like fast-tracking the minimum-wage increase as part of the stimulus bill, along with her opposition to changing Senate rules to kill the filibuster — which effectively requires 60 votes to advance any major legislation — has made her a target for liberals across the country.

Perhaps nowhere is the anger hotter than among progressive activists in Arizona, a state where demographic change has brought about rapid political shifts. Liberal Democrats labored last year to deliver the state’s critical electoral votes to Mr. Biden and to flip the remaining Republican-held Senate seat, all in the hopes of securing a Democratic-controlled Washington that could pass longtime priorities currently constrained by the filibuster.

“We want her to be the best senator possible,” said Dan O’Neal, the Arizona state coordinator for Progressive Democrats of America. “But we want her to start voting like a Democrat, not a Republican.”

Ms. Sinema had earlier signaled her discomfort with passing the minimum-wage proposal as part of the pandemic relief bill, a rationale she cited in explaining her vote on Friday, arguing that the Senate should hold a separate debate on the issue.

The move was in keeping with her overall approach in Congress, where she served three terms in the House before winning election to the Senate in 2018. She has emerged as one of the few true wild cards in her party, with a perpetual asterisk next to her name on Democrats’ whip card.

It is the culmination of a full-scale political transformation by Ms. Sinema, a former social worker and lawyer. The woman now known as a committed centrist ran for the Arizona Legislature nearly two decades ago as a Green Party activist; protested the Iraq war with Code Pink, the left-wing social justice movement; and once warned of the dangers of capitalism and the “almighty dollar.”

Her allies argue that the shift sprang from Ms. Sinema’s desire to play a productive role as a legislator.

“She realized that she could get stuff done working the middle and it had more impact,” said Robert Meza, a Democratic member of Arizona’s statehouse who served with Ms. Sinema during her tenure there from 2004 to 2010. “The left-wing groups, the business community — they started listening more to her. She realized, ‘Hey, I actually have more power in the middle.’” 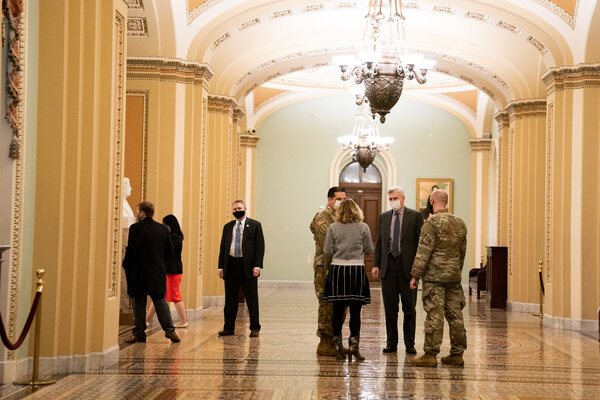 In Washington, while some of her moderate colleagues have been very public about their policy preferences and legislative ultimatums, Ms. Sinema has remained largely inscrutable, declining most interview requests from publications not based in Arizona (including for this article) and refusing to preview how she is thinking about voting on any given bill or nominee.

She is known as a maverick in the staid and stodgy Senate, where her colorful wigs and quirky fashion sense — she turned up on one recent day wearing a hot-pink shirt emblazoned with the phrase “DANGEROUS CREATURE” — belie a preference for keeping her opinions to herself and operating behind the scenes.

Even as Democrats fought to salvage the doomed nomination of Neera Tanden, Mr. Biden’s pick to lead his budget office, Ms. Sinema never disclosed how she would vote.

In stimulus negotiations, Ms. Sinema emerged as a key behind-the-scenes mediator, listening as her colleagues sparred over their differences and trying quietly to guide them to middle ground.

On Friday, as the Senate sputtered to a halt after Senator Joe Manchin III, Democrat of West Virginia, balked over the size and duration of federal unemployment payments in the relief package, Ms. Sinema implored him not to sink the bill.

“We’ve been getting almost everything,” Ms. Sinema told him on the Senate floor, referring to the modifications that leading Democrats had made to the plan to placate moderates.

Separately, she was working with Republicans to secure a $25 billion relief fund for independent restaurants and place stricter guardrails around how states could use stimulus funding.

“She’s developed a lot of conversational relationships with a lot of people on the other side,” said Senator James Lankford, Republican of Oklahoma. “That’s helpful just to be able to get into a dialogue when things get hard.”

It is a battle-tested approach in Arizona, where Ms. Sinema defeated Martha McSally, a Republican, in 2018 in large part by showcasing her centrist credentials and emphasizing her across-the-aisle outreach to woo moderate voters. Senator Mark Kelly, a Democrat, defeated Ms. McSally again in November, hewing closely to the playbook Ms. Sinema helped write.

“It wasn’t by chance that it happened,” Mr. Meza said. “She’s a great chess player.”

But her history as a liberal has only sharpened the sense of resentment she inspires among progressive activists.

“It’s just beyond my understanding that someone could go from a Code Pink activist to saying, ‘Yeah, there are some good things Trump did and I vote with him sometimes,’” said Jenise Porter, an activist in Arizona who helped draft a resolution censuring Ms. Sinema in 2019 for failing to vote along party lines.

Ms. Sinema’s political evolution began a year into her time in the State Legislature, and by the time she was in Congress and running for the Senate, she had established herself as a pragmatist and bipartisan operator. She cited Senator John McCain as a political idol, and wrote a book — part how-to and part political memoir — that included tips like “no one likes a humorless and rigid activist.”

“The bomb thrower doesn’t get to make friends much (understandably so), and she certainly doesn’t get to work with all the people she’s throwing bombs toward,” she wrote in the book, “Unite and Conquer: How to Build Coalitions That Win — and Last.”

It is in that spirit that Ms. Sinema has staunchly opposed the elimination of the filibuster, a position that has earned her entree into a small club alongside Mr. Manchin that is under withering pressure from the left. She has said little about her views on the matter, but has taken to sending inquiring constituents — of which there are many, some angrier than others — lengthy explanations defending her stance.

“Debate on bills should be a bipartisan process that takes into account the views of all Americans, not just one party,” Ms. Sinema wrote in one such missive. “Regardless of the party in control of the Senate, respecting the opinions of senators from the minority party will result in better, common-sense legislation.”

Having never served in the majority party of a legislature until this year, Ms. Sinema has herself practiced that approach for years. She is known to her colleagues as a social butterfly and appears to relish forging friendships with lawmakers across the aisle, a proclivity and skill that is exceptionally rare among politicians.

“She’s very engaging, she’s very bright, she’s very frank,” said Jonathan Rothschild, a Democrat and former mayor of Tucson. “Every time I have been with her, she has that ability to make you feel you are one of the most important people in the world.”

She has also refrained from litigating differences with colleagues in public, an attribute that has won her adoration from members of the other party.

Matt Salmon, a conservative former Republican congressman from Arizona, said his relationship with Ms. Sinema reached an inflection point during a particularly fraught period of his political career, after he initially expressed reluctance to endorse marriage equality after his son came out as gay.

When a local reporter asked Ms. Sinema, who is bisexual and had long lobbied for marriage equality, for her reaction, Mr. Salmon braced himself for the worst. Instead, he recalled, Ms. Sinema responded that she knew how much he loved his son.

“From that moment on, I probably would have walked on hot coals for her,” Mr. Salmon said, growing emotional. “She had an opportunity to slice my throat and let me bleed to death politically.”

“Everybody expects that when somebody has the position she has, it goes without saying you’re going to exploit the heck out of that,” he continued. “But she doesn’t do that, and it adds to her strength.”