January 2020 Joe Biden began the year in the midst of a crowded primary.

April 2020 He struggled for visibility
during a virtual campaign.

October 2020 As the election neared, he
was facing the end of his third
quest for the presidency.

In the capstone of a career that has included two terms as vice president and 36 years in the Senate, Mr. Biden is now facing President Trump in a contest dominated by a global pandemic and a summer of unrest over police killings of Black Americans.

Mr. Biden’s year got off to a rocky start. In February, Iowans dealt him his first setback with a fourth-place finish in the state’s caucuses, and New Hampshire’s primary a week later went even worse. He finished in fifth place — and fled the state before the results came in. 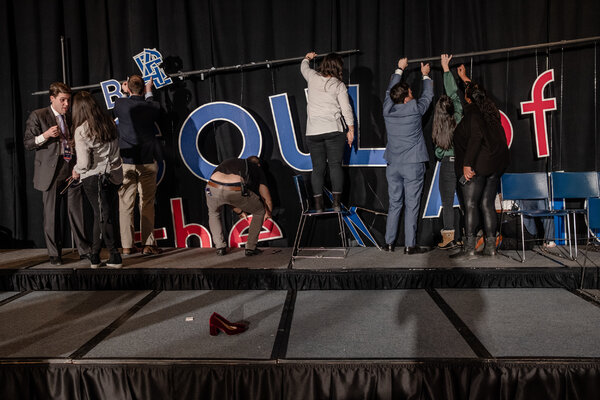 The former vice president and his team hoped his fortunes would improve when more diverse states began holding their contests. Nevada came next, and Mr. Biden finished a distant second behind Senator Bernie Sanders of Vermont.

Then came South Carolina. It was the first early contest where a large number of Black voters would register their preferences, and Mr. Biden enjoyed good will with those voters, stemming from his loyal service at the side of President Barack Obama. He also won the coveted endorsement of the state’s most influential Democrat, Representative James E. Clyburn.

When the results came in, he had won — and he had done so decisively, with more than twice as many votes as his closest rival, Mr. Sanders.

Over the next 48 hours, Mr. Biden got a big boost from his former competitors. Senator Amy Klobuchar of Minnesota and former Mayor Pete Buttigieg of South Bend, Ind., both endorsed him, and so did former Representative Beto O’Rourke of Texas.

On Super Tuesday, Mr. Biden won 10 of 14 states, including some that he never campaigned in. His former rivals continued to coalesce around him over the next week. Senators Kamala Harris of California and Cory Booker of New Jersey endorsed Mr. Biden before Michigan’s primary a week later.

On March 10, Mr. Biden traveled to Ohio, whose primary was scheduled for a week later. He was supposed to hold a rally in Cleveland, but the coronavirus pandemic was about to grip the nation and shut down the campaign trail. Mr. Biden’s rally was canceled.

There would not be more rallies any time soon. The pandemic effectively shut down the race between Mr. Biden and his remaining rival, Mr. Sanders, who dropped out in April.

Stuck at home in Delaware, Mr. Biden adapted to campaigning virtually — though not without some technical glitches. His campaign built a makeshift television studio in the basement of his home, allowing him to hold virtual events and give interviews as the pandemic raged.

Mr. Biden re-emerged on Memorial Day, placing a wreath at a veterans memorial in Wilmington, Del., and wearing a mask, in contrast to how Mr. Trump had been appearing. The next week, he met with community leaders at a Black church in Wilmington following the death of George Floyd in police custody.

Mr. Biden eased back into campaigning — at a distance.

His campaign organized occasional in-person events in Delaware and neighboring Pennsylvania that were designed with safety in mind, with large white circles on the ground ensuring social distancing among reporters who attended.

Mr. Biden once described himself as a “bridge” to a new generation of leaders, and he pledged to choose a woman as his running mate. After months of suspense, he selected Ms. Harris, a former rival, to join the Democratic ticket.

Ms. Harris had once eviscerated Mr. Biden on a debate stage, but their rollout went smoothly. She spoke about working with Mr. Biden’s late son Beau Biden when they were state attorneys general, and the new ticket avoided getting tripped up by their past differences.

The pandemic derailed plans for the Democratic National Convention in Milwaukee and forced most of the proceedings online.

Mr. Biden and Ms. Harris accepted their nominations in front of socially distanced reporters at an event center in Wilmington — a far cry from the packed arena that was supposed to have cheered them on. On the convention’s final night, supporters gathered in their cars as if at a drive-in theater, and the new Democratic ticket joined them for a fireworks display.

Amid concerns from some Democrats about his visibility, Mr. Biden began to step up his campaigning around Labor Day, venturing to battleground states beyond the Mid-Atlantic Region. Once again, his campaign held carefully arranged events with social distancing and mask wearing, a stark contrast to Mr. Trump’s crowded rallies.

Mr. Biden was returning from a campaign trip to Minnesota when the news broke: Justice Ruth Bader Ginsburg had died. Mr. Trump and Senate Republicans moved quickly to appoint Judge Amy Coney Barrett in her place.

Mr. Biden tried to frame the court fight as a battle over the future of health care in America, warning about Mr. Trump’s desire for the Supreme Court to strike down the Affordable Care Act.

The first debate was the subject of great anticipation, presenting Mr. Trump with a chance to change a race that was unfolding in Mr. Biden’s favor. It also put a spotlight on Mr. Biden after Mr. Trump had spent months portraying him as a senile old man.

The meeting, however, was remembered not for Mr. Biden’s performance but for Mr. Trump’s constant interruptions. Voters were left with a headache-inducing spectacle filled more with personal attacks than substance.

Later that week came another seismic development: Mr. Trump tested positive for the coronavirus. Within two weeks, he had recovered and returned to the campaign trail with large rallies that flouted public health guidance.

Mr. Biden stuck to his approach. He made more visits to battleground states but refrained from holding crowded events.

His speeches quickly took on a new soundtrack, with applause lines punctuated by the beeping of car horns.

On the last weekend before Election Day, Mr. Biden campaigned with former President Barack Obama in Michigan, a state their ticket won twice. With coronavirus cases surging in many places, they condemned Mr. Trump over his handling of the pandemic.

Mr. Biden finished the campaign much the way he had started, presenting himself as a unifying figure who would work to repair the damage inflicted by Mr. Trump’s presidency.