The rapid-fire calls were pouring in to Marybeth Kuznik, the one-woman Elections Department of Armstrong County, a few days before Election Day. “This is crazy,” she told an anxious caller. “Crazy, crazy, crazy. It’s a good thing because everybody should vote,” she added, “but it’s just crazy.”

Armstrong County, northeast of Pittsburgh, is one of Pennsylvania’s smaller counties with 44,829 registered voters. But it is a microcosm of the high tension, confusion and deep uncertainty that have accompanied the broad expansion of mail-in voting this year, during an election of passionate intensity.

With all Pennsylvania voters eligible for the first time to vote by mail, more than three million ballots were requested statewide — nearly half the total turnout from 2016. One in five voters in Armstrong County requested a mail-in ballot.

A complicated two-envelope ballot, uncertainty over the reliability of the Postal Service and a glitchy online system for tracking returned votes have caused Ms. Kuznik to be bombarded by callers. And, though to a lesser extent, she has also been visited by a stream of walk-ins at her small second-floor office in the county administration building, where an American flag was stuck into a dying plant above her desk.

“All righty, let’s look you up, see what’s going on,” she told voters who called seeking assistance.

“Gotcha,” she said whenever she found a voter’s name in her Dell computer.

The state-run portal intended to track mail ballots was unreliable, Ms. Kuznik said. By using a database available only to election officials, she was able to reassure voters about the status of a ballot — in nearly all cases, it had been received.

Many callers were alarmed that they had not received a ballot. For some, it was because they had not checked a box on their application for a mail ballot for the primary, asking to receive a general-election mail ballot. “There was a little wee tiny box on there to check,” she told one voter. “Don’t worry about it. Just go and vote.” 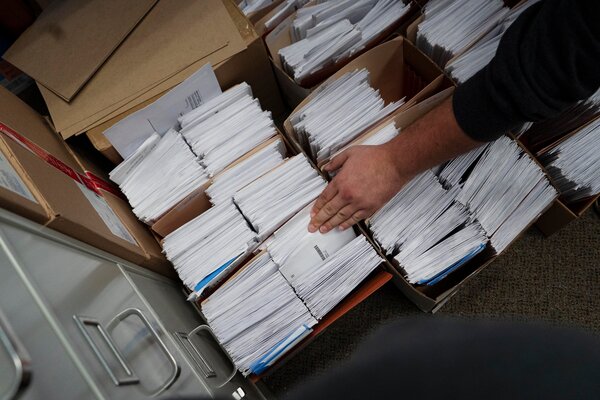 She told an upset caller that his ballot had been mailed on Oct. 16, two weeks earlier. “It’s kind of a long time if you haven’t gotten it,” she said. The voter could either visit Ms. Kuznik’s office to have the original ballot canceled and a replacement issued, or vote using a provisional ballot in person on Tuesday.

When the caller complained of not being able to get through to her earlier by phone, Ms. Kuznik said: “Yeah, I apologize, it’s been very, very busy here. But we will get you a ballot. We want you to vote.”

She then helped Beverly Nason, 84, who was waiting behind a swinging half-door and said her 87-year-old husband, William, had not received his ballot.

“Hold on for a minute,” Ms. Kuznik told a phone caller while helping Ms. Nason. “I’m right in the middle of processing a voter, and I will look up and see what’s going on with that.”

As she readied a new ballot to be printed for Mr. Nason, she talked back to a pop-up on her computer: “No, Adobe, I do not want to give a review of this software. No.”

Amanda Wallace, a child-care worker, appeared and asked where to drop off her completed ballot. “Well that isn’t the whole thing,” Ms. Kuznik told her, explaining that Ms. Wallace, 48, had the inner “secrecy” envelope with her ballot inside but hadn’t brought the outer envelope that she was required to sign. The outer envelope includes a bar code to stop anyone from trying to vote more than once. “You absolutely have to have it in that, or it will not count,” Ms. Kuznik told her.

Sharon Kerr was upset that no ballot had been delivered to her home. It turned out she had entered a post office box for an address. “I can’t fix this today,” Ms. Kuznik told her, “but for right now, I’ll cancel that ballot that was sent out and I’ll get you another one.”

“God bless you, honey,” Ms. Kerr said. “I was worried that mine wouldn’t be counted, and we’ve got to do something. I’m very, very upset with what we have. We need changes.”

Ms. Kuznik, whose job is nonpartisan, did not respond to that, nor to any other comments about candidates. President Trump carried Armstrong County, whose population is almost entirely white and working class, by a margin of more than 16,000 in 2016. Kittanning, the county seat on the Allegheny River, has a population of 4,000. The largest employers are a hospital, government and Walmart.

Many election analysts believe Pennsylvania is the knife’s edge on which the race is balanced, the closest of the three “blue wall” states where Joseph R. Biden Jr., if he sweeps them, has his most likely path to the White House. A New York Times/Siena College poll of Pennsylvania on Sunday showed Mr. Biden with a lead of six percentage points, and a margin of error of 2.4 points.

With more Republicans expected to vote on Election Day and Democrats favoring mail ballots in Pennsylvania, when to count and report results have become partisan flash points. Mr. Trump has demanded, without a basis in law, that the vote leader on election night be named the winner. Democrats are braced for early returns from in-person voters to show a significant Trump lead, with the tide shifting bluer as mail ballots are reported.

Though counties have hired extra workers and in some cases bought machines to rapidly slit envelopes and extract ballots — which they cannot begin to do before 7 a.m. on Nov. 3 — there are wide differences among counties, with some not expecting full results for days.

“No way,” was how Ms. Kuznik responded when asked whether Armstrong County would have all of its votes counted in the hours after polls close at 8 p.m. “We’ll go as quickly as we can, but we’re not going to rush it,” she said. “It’s not the Super Bowl. Nobody’s going to hoist a trophy on election night.”

The state’s largest cities, Pittsburgh and Philadelphia, are aiming to report results of mail-in ballots on Tuesday night, according to an aide to a top Democratic official briefed on statewide preparations. But many second-tier counties, including in the Philadelphia suburbs, will be slower. “Erie, Berks, Bucks, Delaware and Lackawanna are real problems,” the aide said. “Their reporting of mail-in votes could go into Wednesday, which will create a lot of election night anxiety.”

“They’ll still be separating envelopes and ballots on Wednesday, probably Thursday,” he said.

He did not rule out the following Monday for a count of all ballots, including those received in the three days after Election Day that are postmarked by Nov. 3. The secretary of state has ordered counties to segregate ballots received in that window because of potential litigation that has already reached the U.S. Supreme Court.

In Armstrong County, the plan is to open mail ballots and flatten them out in a workroom behind Ms. Kuznik’s office. Workers escorted by sheriff’s deputies will carry the ballots to the public works garage, where the county keeps its scanners.

Ms. Kuznik, who with her mother, Merle Smith Kuznik, had an earlier career running a children’s theater, was named elections director in September.

On Friday, she was preparing to send each polling place a red, white or blue replica of the Liberty Bell, to be rung when someone checked in who was voting for the first time. It was a tradition started by her mother, a longtime judge of elections in a nearby county until her death at 93.

One of Ms. Kuznik’s callers, a woman named Rosanna, was worried that she had not received a ballot.

“Well, Rosanna, what I’m seeing, according to the records here, unfortunately you haven’t voted since 2012,” Ms. Kuznik told her. She explained that her voter registration had been canceled after she missed two federal elections and did not respond to a postcard sent to her.

The voter registration deadline had passed. “After the election, promise me you will call me and we’ll get you a new registration,” Ms. Kuznik said.

Rosanna, who said she had recently retired at 90 from Walmart, began to tell her life’s story.

“Well,” she said at another.

“I don’t want to be mean,” she said finally, “but I have a bunch of people here waiting to get help, so you know maybe, like, why don’t you call me up in January and we’ll have a good long talk?”