Iran is behind threatening, spoofed emails sent to voters, the officials said, but there was no indication that any votes themselves had been altered. 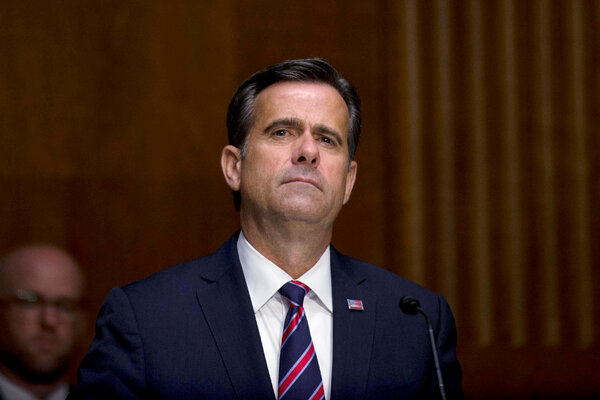 WASHINGTON — Iran and Russia have both obtained American voter registration data, top national security officials announced late on Wednesday, providing the first concrete evidence that the two countries are stepping in to try to influence the presidential election as it enters its final two weeks.

Iran used the information to send threatening, faked emails to voters, said John Ratcliffe, the director of national intelligence, and Christopher A. Wray, the F.B.I. director, in an evening announcement from the bureau’s headquarters. Intelligence agencies had collected information that Iran planned to take more steps more steps to influence the vote, prompting the unusual timing of the briefing as an effort to deter Tehran.

There was no indication that any election result tallies were changed or that information about who is registered to vote was altered, either of which could affect the outcome of voting that has already begun across the country. The officials also did not make clear whether either nation hacked into voter registration systems.

The material obtained by Iran and Russia was mostly public, according to an intelligence official, and Iran was using it as an opposing political campaign might. Some voter information, including party registration, is publicly available, and voters’ names may have been merged with other identifying material like email addresses from other databases, according to intelligence officials, including some sold by criminal hacking networks on the “dark web.”

Still, the announcement that a foreign adversary, Iran, had tried to influence the election by sending intimidating emails was a stark warning. Some of the spoofed emails, sent to Democratic voters, purported to be from pro-Trump far-right groups, including the Proud Boys.

Until now, some officials had insisted that Russia remains the primary threat to the election. But the new information, both Republican and Democratic officials said, demonstrates that Iran is building upon Russian techniques and trying to demonstrate that it, too, is capable of being a force in the election.

Since August, intelligence officials have warned that Iran opposed President Trump’s re-election. They said Iran intended not to deter voters but to hurt Mr. Trump and mobilize support for Joseph R. Biden Jr., the Democratic nominee, by angering voters about the president’s apparent embrace of the Proud Boys in the first debate.