Mr. Biden has sought advice across the Democratic Party’s ideological spectrum, but his core advisers on the coronavirus, economics, foreign policy and climate change are familiar figures. 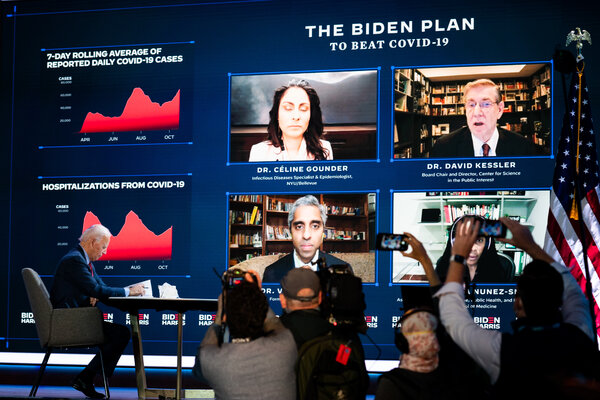 WASHINGTON — Joseph R. Biden Jr., plotting an ambitious presidency that would begin amid twin health and economic crises, is leaning on veteran advisers with high-level governmental experience rather than outsiders and ideological rivals to help guide him on subjects including the coronavirus pandemic and the country’s diminished standing in the world.

In the four years since Mr. Biden left government, elements of his party have moved sharply to the left, and President Trump has reframed much of the conversation on economic inequality and growth, trade, industrial policy and America’s role in the world. But after 36 years in the Senate and eight as vice president, Mr. Biden has surrounded himself with advisers who have been at his side for years and shaped the center-left policies of a receding era.

Mr. Biden once said that people wanted “results, not a revolution,” and the advisers in his orbit generally fit with that theme, even as they acknowledge the shifting policy terrain on issues like China, the Middle East and the American middle class.

Many are well-known figures within Democratic circles, who absorbed both the struggles and successes of President Barack Obama’s administration.

Mr. Biden has promised a diverse administration, although during his presidential bid, his innermost circle has skewed heavily white. Many of his advisers in important policy areas are also white.

Here is a look at some of the people who have Mr. Biden’s ear.

When the Biden campaign learned this month that two people who had traveled with Senator Kamala Harris, Mr. Biden’s running mate, had tested positive for the coronavirus, it convened a conference call with reporters. Also present on the call were two health experts: Dr. Vivek Murthy, a former surgeon general who was appointed by Mr. Obama, and Dr. David A. Kessler, who led the Food and Drug Administration under Presidents George Bush and Bill Clinton.

Mr. Biden has spoken often of his briefings with experts, and Dr. Murthy and Dr. Kessler have been two of the most prominent medical figures whose counsel Mr. Biden has sought during the public health crisis.

“Early on it was every day, or four times a week,” Dr. Kessler said in an interview last month, recalling briefings that he and Dr. Murthy conducted with Mr. Biden in the early days of the outbreak. “We would send in 80- to 90-page documents, take him through the epidemic from epidemiology, therapeutics, vaccines, testing. Staff would join, originally by phone but they soon shifted to Zoom.”

“The docs,” as Mr. Biden calls Dr. Kessler and Dr. Murthy, also pore over research and data on the virus and consult with modelers, vaccinologists and other experts so they can provide Mr. Biden with projections about the coming months.

Mr. Biden and his campaign have stressed the importance of relying on the advice of public health experts — an intentional contrast with Mr. Trump, who has flouted public-health guidelines and disregarded scientific advice.