After the coup in Myanmar, President Biden is being pushed to do what the Trump administration would not: Declare atrocities against the Rohingya in 2017 as genocide. 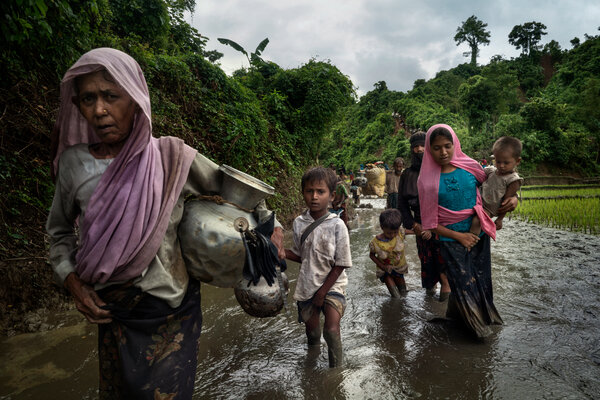 WASHINGTON — Three years ago, American investigators produced a 15,000-page analysis of atrocities committed in 2017 against the Rohingya, an ethnic Muslim minority group in Myanmar. The report documented survivors’ accounts of gang rapes, crucifixions, mutilations, of children being burned or drowned and of families locked inside their blazing homes as Myanmar’s military sought to exterminate them.

That was not enough to convince the State Department during the Trump administration that the United States should officially proclaim the Rohingya to be victims of genocide and crimes against humanity.

But now that the military, the Tatmadaw, has overthrown Myanmar’s civilian government, current and former American officials and human rights activists are demanding that President Biden do what the Trump administration would not: Formally hold the country’s military accountable for genocide and compel international protection of the Rohingya.

“The same military leaders who orchestrated atrocities against the Rohingya have seized power in a violent coup against the elected government,” Senator Edward J. Markey, Democrat of Massachusetts, told Secretary of State Antony J. Blinken at a Senate hearing in early June.

Mr. Markey asked when the State Department would decide whether the atrocities amounted to genocide, and though Mr. Blinken described a “very much actively ongoing” review, he would not predict when it might be resolved. He said the State Department was working with the United Nations “to try to collect and preserve evidence that will be very important” to conclude if genocide was committed.

Some American allies — including Canada, France and Turkey — have already declared the monthslong rampage in 2017 against the Rohingya as genocide. The 57-nation Organization of Islamic Cooperation filed legal action against Myanmar in 2019, accusing it of violating the U.N.’s Genocide Convention.

Mr. Biden has made fostering democracy and protecting human rights pillars of his foreign policy, and in April went so far as to declare century-old atrocities committed against Armenians by the Ottoman Empire as genocide.

But he has stopped short of a genocide designation on behalf of the Rohingya because of a continuing internal debate that has left the administration torn over what impact it would have and how forcefully the United States should be engaged in the protracted conflict between the Tatmadaw and Myanmar’s citizens, according to three people familiar with the discussions.

Diplomats who work on human rights issues have pushed for a genocide declaration. But State Department officials who oversee East Asia policy fear that it could turn other Burmese against the United States for appearing to favor the Rohingya — who are widely reviled in Myanmar and have been denied basic rights by their own government — over people who are now also being brutalized by the military.

“What is the catalyst that’s needed right now for people to focus on Burma as this continues?” said Anurima Bhargava, the chairwoman of the U.S. Commission on International Religious Freedom, a bipartisan panel that makes policy recommendations to the federal government.