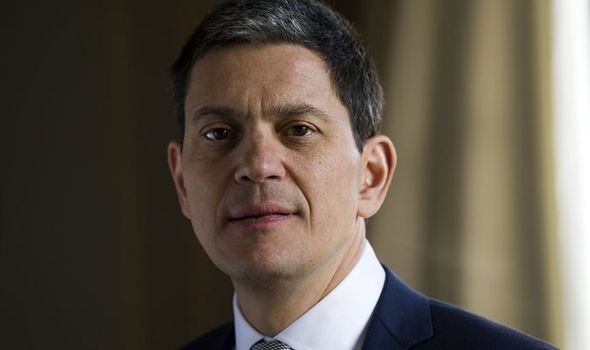 Mr Miliband, who joined IRC after resigning as an MP seven years ago, received an £82,000 pay rise last year, plus a £38,000 housing allowance. His earnings are now five times the salary of Prime Minister Boris Johnson and four times that of UN Secretary-General Antonio Guterres. A senior UN official said: “It beggars belief that the chief of a refugee charity earns four times more than the head of the UN, whose salary has not changed for years.” Mr Miliband also charges up to £76,000 for after-dinner speaking engagements.

His board shared £4million remuneration last year – giving them an average salary of £330,000.

Tory MP Pauline Latham, a member of the Commons international development committee, said: “This is utterly outrageous. Our funds are supposed to be spent on the poorest and neediest in the world, not on multimillionaires like David Miliband.

“There is no way they can claim this is down to market forces since I am not aware of any other charity paying this kind of money.

“It is just scandalous.”

He included details of his earnings in submissions to the US tax man.

Since taking his New York-based job, the son of a Marxist academic and the brother of shadow business secretary Ed has toured the world raising money for the charity.

His highly paid colleagues include Laura Kyrke-Smith, who worked as a speechwriter for the Foreign Office during his tenure and is now IRC’s executive director.

Set up at the request of Albert Einstein to help refugees flee Nazi Germany, the charity got £47.3million from the UK’s Department for International Development in 2018.

John O’Connell of the TaxPayers’ Alliance said: “It’s disappointing to see taxpayers’ money intended for the poorest going towards these super-sized salaries. Every penny leaving these shores must be accounted for.”