WASHINGTON — In one of President-elect Joseph R. Biden Jr.’s closing campaign advertisements, he promised a “new world coming” if Americans voted for “honor,” “decency,” “respect of office” and “truth.”

The restoration of “truth” was illustrated in the ad by a photograph of the podium in the White House briefing room, which under President Trump has been used to disseminate falsehoods and to undermine the credibility of a news media that his aides have referred to as the “opposition party.” The White House press secretary, Kayleigh McEnany, for instance, recently refused to take a question from a CNN correspondent, saying, “I don’t call on activists.”

It was in the briefing room that Mr. Trump suggested that an “injection inside” the human body with a disinfectant like bleach or isopropyl alcohol could help combat the coronavirus; and where his first press secretary, Sean Spicer, set the tone for the administration when he falsely claimed that the president’s inauguration crowd was the “largest audience to ever witness an inauguration, period, both in person and around the globe.”

The relationship between a White House press office seeking to portray the president and his decisions in the best light possible and the news media seeking to separate fact from spin is designed to be adversarial. 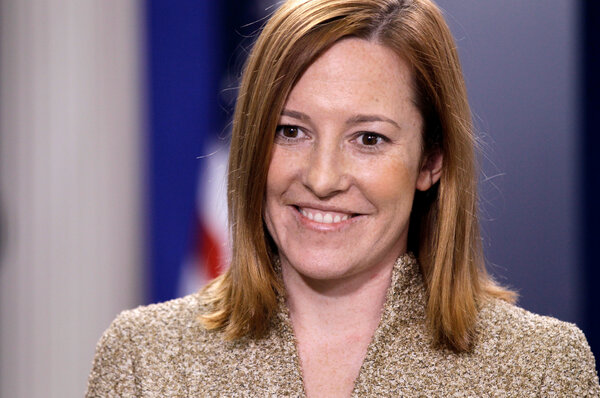 Mr. Biden’s choice of Jennifer Psaki, 42, a veteran of the Obama administration who is generally viewed by reporters as fair and accessible, as his chief spokeswoman embodies that return to normalcy approach.

Ms. Psaki, a former White House communications director and State Department spokeswoman, did not work on the Biden campaign. But she was brought in by two top Biden advisers, Jeffrey D. Zients and Anita Dunn, to help with the transition. Mr. Biden’s decision to appoint Ms. Psaki as press secretary, a role in which she will become one of the most recognizable faces of the new administration, came together in a rush of meetings over the past 10 days.

Mr. Biden, officials said, was particularly drawn to Ms. Psaki by her background at the State Department. There, she worked under Secretary of State John Kerry and grew comfortable delivering 90-minute briefings on foreign policy issues, like a dispute over the South China Sea.

At the White House, Ms. Psaki intends to bring back the daily press briefing, which has been all but phased out over the past four years. It is not clear, however, when those sessions might resume, given the constraints of the pandemic.

But as the incoming administration prepares to roll out a coronavirus vaccine and convince more than 300 million Americans that it is safe, Ms. Psaki, colleagues said, views a central part of her job as restoring faith in the words spoken from behind the podium.

“The clown games are over,” said Susan Rice, who was President Barack Obama’s national security adviser. “Jen will represent the professionalism and decency and commitment to transparency that has been a hallmark of Joe Biden’s career.”

As Mr. Trump’s press secretary, Ms. McEnany has focused on remaining in the president’s inner circle and has made little effort to be accessible to reporters or to disseminate accurate information. Ms. Psaki plans to take a different approach, Biden transition officials said.

At the State Department, they noted, Ms. Psaki moved the spokesperson’s office, which had been on the sixth floor, where it was inaccessible to reporters, to be next to the press room.

Ms. Psaki, pronounced SOCK-ee, was a candidate for the press secretary’s job under Mr. Obama, but she is arguably coming into it now at a more difficult and more critical moment.

“I think she brings as much experience in that building, as much as anyone has ever brought to the job,” said Robert Gibbs, who served as Mr. Obama’s first White House press secretary. “The world this administration inherits has more challenges than any in nearly a century. Having a steady, experienced voice behind that podium will serve them well.”

Since leaving government, Ms. Psaki has worked as a senior vice president and managing director for the Washington office of Global Strategy Group, a public relations firm that works with corporate, nonprofit and political clients, and has served a principal at WestExec Advisors, a consulting firm founded by Antony J. Blinken, Mr. Biden’s choice for secretary of state.

Ms. Psaki, a graduate of the College of William and Mary, was most recently a nonresident scholar at the Carnegie Endowment for International Peace, a Washington-based think tank, and a paid contributor on CNN, a position she left in September.

She is expected to have access to Mr. Biden, whom she has known for 12 years.

“The name of the game is access,” Mr. Gibbs said. “Are you in the meetings? Some of the best prep for the briefing itself was being in the meeting — understanding where the president’s head was and where the debate was going.” — Annie Karni

Kate Bedingfield has spent the past two years as one of the most visible public faces of the Biden campaign. As communications director, she will help shape the message for the president and the White House.

Mr. Biden is known for turning to loyal advisers, and Ms. Bedingfield has been a trusted aide since 2015, when she joined the vice president’s staff as communications director as he was weighing whether to run for president in 2016.

She was an original member of his 2020 campaign, serving as a deputy campaign manager and communications director. In that role, she often appeared on television as a surrogate for Mr. Biden, sometimes from her bedroom because of the pandemic.

With Ms. Bedingfield running the communications operation, the campaign’s message of unifying the country remained consistent from Day 1 through Election Day, even amid criticism and second-guessing from some Democrats.

During the campaign, she was forced to navigate a number of public relations challenges, including the attacks from Mr. Trump and his allies on Mr. Biden’s son Hunter Biden and his business dealings in Ukraine. Ms. Bedingfield and her team did not hesitate to press reporters on the word choices they made in describing the baseless accusations against Mr. Biden and his son.

Ms. Bedingfield was also charged with trying to make a positive case for Mr. Biden after he finished fourth in the Iowa caucuses and fifth in the New Hampshire primary, low points on the Biden campaign that at the time raised serious doubts about his path to the Democratic presidential nomination.

“The job she did in the campaign is underappreciated,” said Jennifer Palmieri, who served as White House communications director for Mr. Obama. “When a candidate comes in with the expectations and experience of Joe Biden and then falls so dramatically as he did, where he came in fourth and fifth, to hold a campaign together and keep the candidate focused and upbeat and optimistic is a very difficult task.”

Ms. Bedingfield, 39, who grew up in the Atlanta area and is a graduate of the University of Virginia, worked on John Edwards’s 2008 presidential campaign and in the Obama White House during Mr. Obama’s first term.

The president-elect is an institutionalist, a deal-making centrist and a consummate political insider who has hired a number of top advisers with backgrounds rooted in the traditional corridors of Washington power.

One of his newly selected press aides brings a notably different perspective to the team.

Karine Jean-Pierre, who was named Mr. Biden’s principal deputy press secretary, has held a number of governmental and campaign roles. But she is steeped in grass-roots progressive activism, too, as a former chief public affairs officer at the liberal group MoveOn. She is also a former political analyst for NBC and MSNBC.

Ms. Jean-Pierre has also spoken about her belief that her identity as a woman of color and daughter of Haitian immigrants cut a sharp contrast with the divisive and at times racist rhetoric promoted by Mr. Trump.

“I am everything that Donald Trump hates,” she said in a video she filmed for MoveOn. “I’m a Black woman, I’m gay, I am a mom. Both my parents were born in Haiti.”

Ms. Jean-Pierre, 46, served in the Obama White House and worked on Mr. Obama’s 2008 and 2012 campaigns. She was also a deputy campaign manager for the unsuccessful presidential campaign of Martin O’Malley, a former governor of Maryland, in 2016. But she was not an original member of the Biden campaign, arriving as a senior adviser last spring after Jennifer O’Malley Dillon was brought on as campaign manager.

Ms. Jean-Pierre later served as the chief of staff for Mr. Biden’s running mate, Senator Kamala Harris. That job that gave Ms. Jean-Pierre access to the candidate but did not require her to engage in the daily sparring with journalists that she may need to do in her new role, in which she is expected to work closely with Ms. Psaki.

Ms. Jean-Pierre, a graduate of Columbia’s School of International and Public Affairs, came up in New York politics, describing former Mayor David N. Dinkins, who recently died, as a mentor.

“She will bring a steadiness, an evenness,” said Leah Daughtry, a veteran Democratic strategist who knows Ms. Jean-Pierre from New York. “She also brings her own experience as the daughter of immigrants, as someone from the queer community, as someone who’s a New Yorker.” — Katie Glueck and Thomas Kaplan

As Mr. Biden reveled in his Super Tuesday victories in March in a speech in California, two protesters threatened to ruin the moment, climbing onstage with the septuagenarian candidate.

Symone D. Sanders did not waste any time. She charged forward and, with the help of Mr. Biden’s wife, Jill Biden, and several aides, hauled one of the protesters away.

Ms. Sanders is no stranger to brawling on behalf of her boss. She served as an outspoken senior adviser to Mr. Biden’s presidential campaign, emerging as a prolific surrogate at news conferences and on social media.

Now, she will be a senior adviser and chief spokeswoman for Ms. Harris, whom she advised during the general election, traveling with her and assisting with debate preparations. Ms. Sanders is expected to play key roles both in guiding the press operation and in advising as Ms. Harris pursues her own initiatives as vice president.

“She’s going to be able to work both worlds very, very well,” said Representative Cedric L. Richmond, Democrat of Louisiana and an incoming senior adviser to Mr. Biden in the White House.

Ms. Sanders, 30, a Nebraska native, is fluent in both the language of the left and internet discourse — in contrast to some of Mr. Biden’s longer-serving advisers — and she was an important point of contact for several key political constituencies during the race.

But she does not have the decades of traditional campaign and Washington experience that many in Mr. Biden’s orbit value. Indeed, she signed on with the Biden campaign after working as press secretary for Senator Bernie Sanders’s 2016 presidential campaign at age 25.

Yet a combination of loyalty to Mr. Biden and a different perspective from many in his inner circle helped Ms. Sanders become an important and respected voice in the campaign, and she was mentioned as a possible White House press secretary.

In the vice president’s office, Ms. Sanders will work closely with Ashley Etienne, the communications director for Ms. Harris who is a veteran of the Obama administration and also served as a top aide to Speaker Nancy Pelosi.

This year, Ms. Sanders, a graduate of Creighton University, published a book titled, “No, You Shut Up: Speaking Truth to Power and Reclaiming America.” She has also done strategic communications consulting work, but does not intend to continue that while in government.

In an interview, Ms. Sanders, who is Black, noted that the transition had rolled out at one time the White House communications team’s leadership, made up entirely of women — both white women and women of color.

“The most qualified people for the job also happen to all be women,” she said. “That is historic. Not too long ago, the powers that be would not have picked us.” — Katie Glueck