MONTGOMERY, Ala. — This summer, as Mayor Steven L. Reed of Montgomery mulled over ways to commemorate the 65th anniversary of the city’s bus boycott, he took a critical look at whose legacies had been honored since that protest — and whose, it seemed, had been forgotten.

Mr. Reed, Montgomery’s first Black mayor, saw tributes across the city to Rosa Parks, the seamstress whose refusal to give up her bus seat on Dec. 1, 1955 represented one of the opening salvos of the civil rights movement.

He saw streets and schools named for E.D. Nixon, a lead organizer of the boycott and a founder of the Montgomery Improvement Association.

But there was no street sign, no edifice heralding Fred D. Gray, who as a 24-year-old lawyer had helped defend Ms. Parks — who had gone on to become, as the Rev. Dr. Martin Luther King Jr. deemed him, “the chief counsel for the protest movement.” 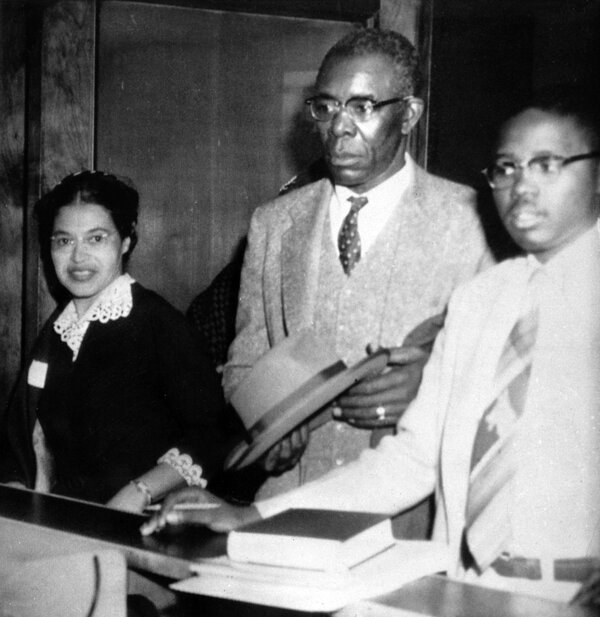 So Mr. Reed asked Mr. Gray himself how he wished to be honored. Now 90, Mr. Gray proposed renaming Jeff Davis Avenue, the place where he had grown up — the street named for the president of the Confederacy, the street where, as a young man, Mr. Gray had determined his life’s mission “to destroy everything segregated.” It was, Mr. Reed said, an easy yes.

There was one problem: The Alabama Memorial Preservation Act had recently been passed to prevent local officials from doing just what Mr. Reed had in mind. The law forbids the renaming of not just monuments, but also streets 40 years and older that “have been constructed for, or named or dedicated in honor of, an event, a person, a group, a movement, or military service.”

Mr. Reed’s efforts come at a moment when the United States’ history surrounding racism is under intense reconsideration, especially in the naming of monuments, roads and schools for figures of the Confederacy.

In the aftermath of this summer’s protests, those debates have churned in earnest in Montgomery, the first capital of the Confederacy. Just one week before Mr. Reed formally announced his plan to rename the street Fred D. Gray Avenue, Alabama’s Republican attorney general, Steve Marshall, took aim in a video at the growing number of officials who have tried to pull down or recast Confederate memorials, arguing that they had done so “not out of courage,” but out of “fear.”

“This should not be celebrated,” Mr. Marshall said. “It is now a question of when, not if, these same leaders will cast aside yet another law, being guided only by the political whims of the moment.”

Mr. Reed maintains he wasn’t aware that street names fell under the purview of the law. But the stage is now set for a likely clash between Mr. Reed and the attorney general. A spokesman for Mr. Marshall declined to comment on Mr. Reed’s efforts, saying his office “generally refrains from comment about possible violations of the Alabama Memorial Preservation Act before they occur.”

Mr. Reed is intent on moving forward and, if need be, paying the price — a $25,000 fine. “This is about honoring those people who deserve to be honored,” he said in a recent interview in his office. “And maybe confronting some of those who were honored at a previous time who never should have been.”

‘All we knew was, this was home’

Fred Gray, who was born on Dec. 14, 1930, recalled vividly the first time he saw the white frame house on West Jeff Davis Avenue, the way it flickered into view when he was 6 or 7 years old. Speaking recently at his office in Tuskegee, he described sitting nose-to-knees in a horse-drawn wagon, his mother and their belongings beside him, as his grandfather steered them across the unpaved road and up to the front porch.

There was no running water — cold, tin-tub baths filled from the faucet a block away loomed. He spied an outhouse in the back. The family of five children and a recently widowed mother in Jim Crow Alabama, Mr. Gray recalled, was “just thankful to have a place to live.”

From then on, Jeff Davis was his world. For years he walked to the Loveless School, crossing the part of the street where the red dirt turned to pavement. Karen Gray Houston, Mr. Gray’s niece and the author of the memoir “Daughter of the Boycott,” remembered congregating at the frame house on Sundays after church. The children would sit on the front-porch rockers, helping their grandmother snap beans.

It was a world familiar to many Black families in Montgomery. Few of the city’s white residents lived on West Jeff Davis; for many of them, knowledge of the neighborhood came by way of the women who took care of their kitchens and yards and children, located on the other side of town.

It would be several years, Mr. Gray said, before he considered what it all meant, sleeping and doing homework within the nominal bounds of Jefferson Davis and the system that honored his legacy. “I never thought about who Jeff Davis was, probably didn’t know anything about him until I got in high school,” he said. He is sure he was taught about Davis, but doesn’t remember giving much thought to living on a street named for the president of the Confederacy.

Routine, he explained, has a way of softening the edges of oppression. “The matter of segregation — it was a matter of law and it was what we all lived by,” he said. “All we knew was, this was home.”

His perspective changed when walks to Loveless became bus rides to Alabama State College for Negroes — now Alabama State University — on the east side of town. He watched the scenes of West Jeff Davis blur into the tapestry of upscale white neighborhoods like Cloverdale. He also watched, and was one of, the Black men and women forced to pay their fare at the front of the bus and enter in the back, part of a string of daily indignities that would form the underpinning of his life’s work.

Beyond his successful challenge to the Montgomery bus system, that work has included lawsuits that prompted Alabama’s most meaningful attempts at school desegregation in the decade after the 1954 decision Brown v. Board of Education. In 1960, arguing before the Supreme Court as a 29-year-old, Mr. Gray won the landmark ruling in Gomillion v. Lightfoot that declared gerrymandering as a means of disenfranchising African-Americans unconstitutional.

Still, for Mr. Gray and many others in Montgomery, the continued presence of Jeff Davis Avenue can serve as a reminder that the quest for racial equality is far from over.

“It matters,” said Michelle Browder, who once owned a fish and barbecue restaurant on West Jeff Davis. “When you live there, when you work there — it matters to have to refer to these names every day. It’s almost like keeping that spirit alive.”

As the niece of Aurelia Browder, the lead plaintiff in the lawsuit that led to the desegregation of Montgomery’s buses, Ms. Browder has long felt the narrowness of collective memory regarding this chapter of the civil rights movement.

“We tend to stop at Rosa Parks,” she said. “But when you amplify voices of others who were there, it just broadens the conversation. This is overdue for Fred Gray.”

Mr. Reed is now preparing for the next steps in the renaming process, which include feedback from property owners and a formal presentation before the city’s planning commission.

If successful, Mr. Reed’s efforts would almost certainly run afoul of Alabama’s Memorial Preservation Act, which Gov. Kay Ivey, a Republican, signed into law in the spring of 2017 — in part as a result of Birmingham’s attempt two years earlier, in the aftermath of the shooting at Emanuel A.M.E. Church in Charleston, S.C., to remove its Confederate Soldiers and Sailors Monument.

That memorial, erected in 1905, was once more in the spotlight in August 2017, after the deadly white supremacist rally in Charlottesville, Va. Mayor William Bell of Birmingham, a Democrat, covered the 52-foot-high obelisk with plastic and plywood, prompting an immediate lawsuit from the state that said he had violated the new monuments law.

In January 2019, the Jefferson Circuit Court ruled in favor of the city, arguing that the state law violated a municipality’s right to free speech. That fall, however, the Alabama Supreme Court unanimously reversed that ruling, effectively ending legal challenges to the act at the state level.

‘I knew we were breaking the law’

Nevertheless, a growing number of local officials have proved willing to break the law and pay the $25,000 penalty. In Birmingham, the Democratic Mayor Randall Woodfin ordered the removal of the Soldiers and Sailors monument one week after the killing of George Floyd in May. He argued that the fine was less costly than continued civil unrest.

In Lowndes County, whose population is almost 75 percent African-American, county commissioners voted unanimously this year to remove a Confederate memorial that for decades stood in front of the courthouse in Hayneville. “I knew we were breaking the law, but I just thought it was something we had to do,” said Dickson Farrior, 72, the commissioner who first pushed to remove the monument. “It represented white supremacy, and we don’t need that.”

Mr. Farrior, who is one of two white men on the commission and has represented his district since 1985, said the county set up a GoFundMe page to help pay the fine, but was pleasantly surprised when a local couple volunteered to cover the $25,000 themselves.

“I don’t know whether the Legislature had in mind that, in effect, you can pay to change your monuments,” said Paul Horwitz, a professor at the University of Alabama School of Law.

Still, Mr. Horwitz said, a drumbeat of actions like Mr. Reed’s and Mr. Farrior’s could add a layer of pressure for legislators to reconsider the act — or at least “amend it in a way that allows for more public discussion.”

At a minimum, the state can most likely expect more challenges from Mr. Reed, who recently formed a committee of historians and community leaders to review the names of other public spaces across Montgomery.

Mr. Gray recently turned 90. At times he strains to hear. His cheeks, once so prominent in the old newspaper photographs framed throughout his office, have thinned. West Jeff Davis is different, too: Most of the homes of Mr. Gray’s childhood, including his own, are gone. Today, the foot of the neighborhood intersects with Rosa L. Parks Avenue.

For Mr. Gray, the name change would in some ways represent the culmination of a career dedicated to fighting injustice.

For Mr. Reed, the urgency of that change stems not just from the context of the current moment, but also from a desire for Mr. Gray to witness it.

“I don’t believe you should wait for people to die before you give them their flowers,” he said.