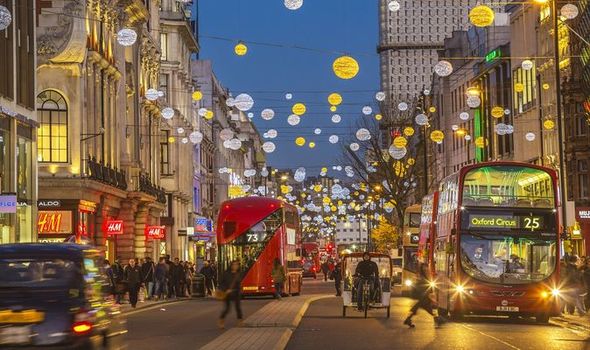 The Health Secretary urged the public to play its part to ensure festive celebrations are safe after a spike in cases last year meant restrictions were imposed. He spoke as it was revealed that more than half of over-50s eligible for a Covid-19 booster jab have had one. NHS England figures show that in less than six weeks, more than 4.5 million top-up doses have been given to people in that age group, who had their second jab at least six months ago.

He added that “everyone’s got a role to play” in keeping the spread of the disease down.

Mr Javid said: “We all want a fantastic Christmas and we can ensure that by getting out there and getting our vaccines.

Protect “There are still some five million people out there that haven’t had a single dose of the vaccine, and we need to basically tell them they need to do that, not just to protect themselves but to protect their loved ones, to do their bit. But also there’s other sensible behaviours that we can all have over the next few months.

“It’s getting darker, we can see it’s getting colder, we will spend more time indoors, and so we should think about hand hygiene, about getting tested regularly, especially if you’re going to meet your more vulnerable…perhaps an elderly relative or someone…so if we can do all that, I’m sure that we’re going to have a great Christmas.”

However he admitted that no “sensible health secretary” in the world would want to predict the situation in three or six months’ time, as there is a risk of new variants causing problems.

In total, 5.2 million boosters jabs have been administered in England, including for younger people with underlying conditions and healthcare staff.

It means at least one in eight people who have had the first two jabs are likely to have also had a third.

People only become eligible once six months have passed after their second jab.

Around 20 million over-50s in England have had the first two doses and will become eligible for a third. Some nine million in that age group are eligible and half have had it.

Last week was a record-breaker for booster jabs, with almost 1.5 million administered. More than 710,000 were delivered between Friday and Sunday alone.

There was also a record number of bookings with 900,000 people making a booster appointment through the National Booking Service, a 42 per cent increase on the previous week. The NHS is sending out a further two million invites this week.

Dr Nikki Kanani, NHS deputy vaccination programme lead, said: “It’s fantastic to see such enthusiasm for the NHS booster campaign as record numbers have come forward and either booked or received their vital vaccination, joining myself and millions of others who have already had our vital top-up.

“Thanks to the huge efforts of staff, half of [eligible] over-50s are already protected – a remarkable achievement in such a short space of time.

Progress “It is really important you come forward for yours as soon as you become eligible, at least six months on from your second jab.”

Mr Javid said: “We are making excellent progress with our booster programme. It is vital that we stay ahead in the race between the vaccine and the virus as we approach the winter months, and I urge all those who are eligible to book in their booster now.”

There were 36,567 new Covid-19 cases confirmed across the UK yesterday – the lowest in the last fortnight.

The number of deaths reported was 38. Infection rates have hit around 40,000 a day over the past week, mostly among children and younger adults.

Government scientists believe the “child epidemic” could slow down before long, as so many will have been infected.

Hospital admissions and deaths remain low compared with the January peak, but some experts fear been in they will increase. Labour has called for the Government to move to Plan B restrictions, which include a return to working from home, mandatory use of face masks and vaccine passports for places such as nightclubs.

But Mr Javid said the data the Government is analysing does not show there is a need to move to Plan B, which is designed to protect the NHS from “unsustainable pressure”.

He added: “The purpose of setting out a clear plan, which we did a few weeks ago, not just with respect to

Covid but the other winter challenges that we have in the health system, was to make clear how we will make these decisions.

“Now, we don’t think we have reached the point where Plan B needs to be activated, but, of course, we will keep it under review.”

The Prime Minister’s spokesman said: “If the public continue to abide by the behaviours and guidance we have set out, and those eligible get their booster jabs, we believe we can further curb cases and bring rates down, along with hospitalisation and deaths.”

Mr Javid also warned NHS staff in England he is “leaning towards” making it mandatory for them to be vaccinated in the same way social care workers are. Around 100,000 health workers are yet to take up two jabs and “there is an issue about patient safety”, he said.

There had been an increase in the number of people coming forward to “do the right thing” after mandatory vaccinations were announced for social care and he hoped to see “the same thing with the NHS”.

He added: “If they haven’t got vaccinated by now then there is an issue about patient safety and that’s something the Government will take very seriously.”

From November 11, anyone working or volunteering in a care home will need to be fully vaccinated against Covid-19, unless exempt.

Mr Javid said it would be “months and months” before any rules were introduced for the NHS.

Jeremy Brown, professor of respiratory medicine at University College London Hospitals, who sits on the Joint Committee on Vaccination and Immunisation, said unvaccinated frontline NHS staff “should change their role” if they are not prepared to get a jab.

He said: “If you’re frontline NHS staff dealing with patients and meeting the public you should be vaccinated – it’s a professional thing, it’s a safety thing.

have now administered England h hosp tially “We know that quite a few infections that have occurred in the hospital have potentially come from staff rather than patients.And if you’re not vaccinated, I feel, you shouldn’t be dealing with patients or the general public.

“Whether it should be compulsory it is always a tricky thing, but I do think, professionally, each person should be vaccinated.” On whether staff should lose their jobs if they were not vaccinated, he said: “I think they should change their role.”