On family WhatsApp groups and in Spanish-language media, misinformation paints 2020 as a zero-sum game. 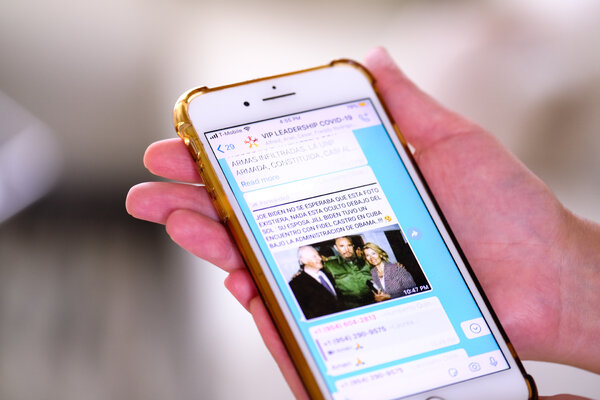 By Patricia Mazzei and Jennifer Medina

MIAMI — Even by the permissive standards of partisan talk radio, the grave warning from the host of a program on a popular Spanish-language station in Miami one afternoon in September was outlandish.

Carinés A. Moncada, the host, claimed that a co-founder of Black Lives Matter practiced “brujería” — witchcraft.

“And whoever votes for Biden, unfortunately, is supporting that,” she concluded.

Ms. Moncada appeared to be citing News Punch, a website known to publish conspiracy theories. She posted a link to a story the site published about witchcraft on Twitter. It was based on an interview in which the Black Lives Matter co-founder mentioned invoking the “spirits” of people who have died.

By repeating the racist tropes on the radio, Ms. Moncada spread it beyond her 45,000 Twitter followers and into South Florida’s mainstream broadcast media, a worrying circle of misinformation targeting Latino voters in the nation’s biggest presidential battleground state.

Some of the wild and baseless claims question the validity of the coronavirus death toll, and question whether Joseph R. Biden Jr. can be president because of his Catholic faith.

But some of the most insidious messages disseminated to Spanish speakers across the country, like the one shared by Ms. Moncada, are intended to pit Latino and Black voters against one another by using racist language — sometimes veiled, sometimes not — to cast those who protest police violence as untrustworthy and dangerous. The efforts aim to draw clear distinctions between Black and Latino voters, though Afro-Latinos make up a sizable part of the population.

Researchers say that the scale and extreme nature of misinformation, after ramping up in every election cycle for the past several years, have spiked this year.

“They feed into real fears, about the pandemic, about socialism and exploiting potential gaps within communities, between the Black community and the Latino community,” said Jacobo Licona, who studies misinformation for Equis Labs, a liberal-leaning Latino research group. “There’s misinformation from people not even understanding how they are spreading it, that continues to stoke real tension and anxiety right now.”

It is difficult, if not impossible, to know how much of an impact the false information is having on voters so far. Some Democratic strategists privately noted that internal polling was not showing that the rumors were effective in flipping would-be supporters of Mr. Biden toward voting for President Trump.

Incredible flyover footage: The new $1.25b Transmission Gully highway in and out of Wellington
Recent Posts
Copyright © 2020 miamiheatnation.com.
This website uses cookies to improve your user experience and to provide you with advertisements that are relevant to your interests. By continuing to browse the site you are agreeing to our use of cookies.Ok