WASHINGTON — House Democrats put new weight on Monday behind their push to grant statehood to Washington, D.C., convening a key House panel to make the case in the latest sign that the long-suffering movement has shifted from the political fringe to the center of the party’s voting rights agenda.

At a hearing before the House Committee on Oversight and Reform, local officials argued that the deadly Capitol riot — during which the mayor was powerless to quickly call in the National Guard, as a governor would have been able to do — provided new evidence that the District of Columbia and its more than 700,000 taxpaying residents needed federal representation.

The panel was considering a bill that the House passed last summer to establish for the first time a 51st state — called Washington, Douglass Commonwealth, in honor of Frederick Douglass — with two senators and a voting representative in the House. The legislation would leave the National Mall, the White House, Capitol Hill and some other federal properties under congressional jurisdiction.

“Congress can no longer allow D.C. residents to be sidelined in the democratic process, watching as Congress votes on matters that affect the nation with no say of their own, or watching as Congress votes to overturn the laws of the duly elected D.C. Council with no say of their own,” said Representative Eleanor Holmes Norton, the District of Columbia’s lone nonvoting delegate. “Full democracy requires much more.”

Proponents of statehood have long argued that Washington residents deserve representation in Congress, and have noted that the disenfranchisement of the city’s residents disproportionately affects people of color. But the testimony on Monday underscored how events in the nation’s capital over the past year, coupled with relentless activism for statehood, have further rallied congressional Democrats into near unified support of the issue.

And it highlighted how the fate of the District of Columbia — a predominantly Black city that disproportionately votes for Democrats — has become intertwined with a broader push for voting rights that the party has made a centerpiece of its agenda.

Democratic leaders cited frustration over the Trump administration’s handling of racial justice protests last summer — including the deployment of federal officers and the violent removal of peaceful protesters — ahead of the House vote last year.

On Monday, local officials pointed to the decision to treat the District of Columbia as a territory, not a state, in distributing state funds from the initial $2.2 trillion stimulus law passed in 2020, which meant that its residents were shortchanged more than $700 million, said the city’s mayor, Muriel E. Bowser.

The officials also cited the Jan. 6 attack, when a delay in sending troops to back up overwhelmed police officers at the Capitol contributed to disastrous results.

“Washington, D.C., has been a true partner to the federal government in every possible aspect, even though Congress and the presidents have been sporadic partners to us,” Ms. Bowser said in her testimony. She later pointed out that the local Metropolitan Police Department was a critical part of the response to the Capitol riot on Jan. 6, even though she was unable to unilaterally call up the National Guard.

“The new state will be a necessary partner to securing the federal interests, not a detractor,” she added.

While House Democrats are expected this year to pass the legislation for a second time, it will most likely be over uniform Republican opposition. Republicans have long accused Democrats of backing it in an attempt to bolster their majorities in the House and Senate.

Representative James R. Comer of Kentucky, the top Republican on the oversight panel, called it “Plan B of the Democratic power grab” after eliminating the filibuster in the Senate.

Representative Carolyn B. Maloney, Democrat of New York and the panel’s chairwoman, said that Republicans were merely opposing the move because of partisan bias, declaring that “the simple truth is that the right to democracy should not be contingent on party registration.”

But conservatives argued that the bill was unconstitutional, and some suggested that if District of Columbia residents wanted representation, they should instead consider dissolving a majority of the District and becoming a part of neighboring Maryland. Ms. Norton and other witnesses were quick to reject that suggestion. 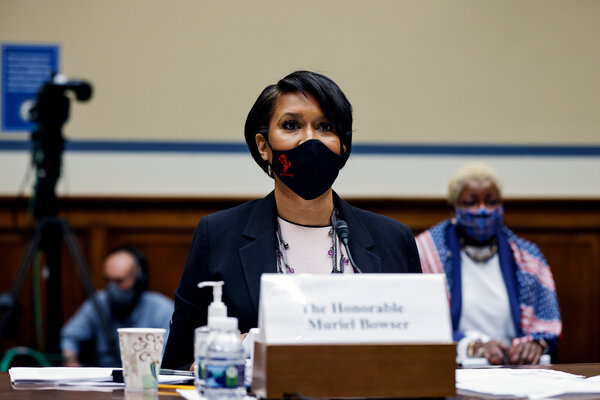 “Even if Congress could transform the District into a new state by simple legislation, we have to ask the question whether it should — and, again, the answer is no,” said Zack Smith, a legal fellow at the Heritage Foundation who was invited to the hearing by Republicans. “The framers of our Constitution wanted a separate federal district to preserve the safety and security of the federal government.”

The legislation stalled last year in the Senate after passing the House nearly on party lines. Democrats are now in control of the upper chamber with a 50-to-50 majority and have the promise of a presidential signature if the measure were to make it through. Jen Psaki, the White House press secretary, confirmed last week that President Biden supported it.

But should the House approve the legislation again, it would join other marquee Democratic measures — including bills on voting rights, police bias and misconduct, and gay and transgender rights — that lack the 60 votes needed to overcome a filibuster. Democrats have begun lining up the measures as part of a drive to make the case for getting rid of the 60-vote rule for legislation, effectively neutering the filibuster.